How Cody Garbrandt Killed the King 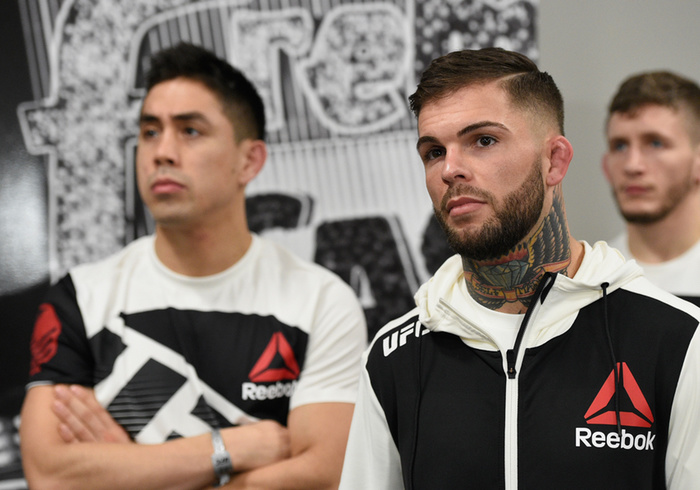 Most did not expect much of Cody Garbrandt going into his UFC 207 match up with Dominick Cruz. There was so little footage of him to go on, he had fought so few top level fighters, and even those top fighters he had beaten had been overwhelmed in seconds—showing nothing of the endurance and staying power he would need to beat a champion who specializes in five round fights. Yet in the penultimate UFC bout of the year Garbrandt may well have pulled off the year's greatest performance. He didn't starch Dominick Cruz with a quick blitz or a one-and-done counter which could be written off as a lucky punch, instead he repeatedly manufactured and won exchanges on his own terms for five rounds against one of the greatest ring generals in the history of mixed martial arts.

Two Ways to Skin a Rabbit

The reason that the sweet science of fighting is more of a vague art is that there aren't a lot of strict rules, only principles, and there often exist numerous ways to attempt to solve a problem. For example, in dealing with a reach disadvantage you can go to the opponent, attempting to slip and weave through it, or you can take a step back and ask him to lead, stepping in as he does so. The problem of landing hard blows on Dominick Cruz has been his excellent lateral movement and his constant feints. The standard means for forcing engagements and increasing the odds of landing heavy blows would be to cut the cage on Cruz but not very many MMA fighters are good at this, even against a mildly aware opponent. Watching the otherwise excellent TJ Dillashaw attempt to push the pace on Cruz, all of Dom's defensive savvy, feints and direction changes can be seen in action.

What Cody Garbrandt did to get a hold of Dominick Cruz was exactly the opposite. Garbrandt made the champion come to him. Dominick Cruz on offense is often about throwing a couple of strikes as he darts or walks past a pursuing opponent—in through the front door and out the side door. The problems come when the front door moves five feet back as you lunge for it. Through the full five rounds of Cruz versus Garbrandt, Garbrandt was in the position which Cruz normally loves: backtracking and bringing his man forward.

The entire dynamic of the fight came from Garbrandt taking on the evasive, drawing role and it was a stroke of genius. For instance, against an active mover like Cruz it is always a good idea to get to work kicking his legs. If you can hit them, you have a good chance of slowing him down. If he starts picking them up to check you don't get to hurt him but it serves the same purpose because he is on one leg as he does so, unable to move as freely. But it is difficult to actually land the low kicks when Cruz is doing his in and out feints and ready to spring back whenever a strike comes.

Yet by constantly dropping away from Cruz's advances, Garbrandt often managed to achieve that trick which Lyoto Machida used to do so well. He got Cruz taking that 'extra step' to keep up, walking to where he thinks the opponent will be. Where Cruz is normally on the edge of reach, ready to get in or out in an instant, he was walking straight towards Garbrandt, anticipating a retreat.

Those who saw the sensational Dillashaw – Cruz bout from the beginning of 2016 will recall that a couple of Dillashaw's more successful moments came as he gave up the chase and Cruz stepped in to lead.

The beauty of the fight was that by giving ground Garbrandt could encourage Cruz to do all the unorthodox things he loves doing, but have the champion step into trading range as he did so. The story of the bout was Cruz marching in with shifting punches or long swings, Garbrandt slipping, and suddenly Cruz being on top of him. It was here that all of the unorthodox aspects of Cruz's punching form started to betray him. Where Garbrandt is economical with his punches and his head movement, Cruz would stand upright and swing straight arm swings with his other hand at his waist. The guarding hand and economical punching and slipping form are both developments from the boxing ring for the lightning fast and dangerous action of punching range exchanges, a lack of them isn't an issue when Cruz is in control of the distance.

The issue was that Garbrandt wasn't out on the end of Cruz's swings, he'd dropped under them as Cruz stepped in and ended up coming up with counters as Cruz kept swinging.

Cody Garbrandt has been smoking people left, right and center, and most of us anticipated him to come in against Cruz attempting to do the same. Instead he carefully drew the fight into an area where he had an advantage—the shortness and crispness of his head movement and punches. Had he simply run out attempting to take Cruz's head off as he had against Mizugaki and others, I expect we would be talking about another excellent Dominick Cruz title defense in this article. In fact this fight told us more about Garbrandt than his entire MMA career to date, which isn't saying much because, astonishingly, in his UFC career Cody Garbrandt had not even had to defend a single takedown. Against Dominick Cruz he defended or countered seven attempts perfectly.

And Garbrandt even took a page out of Cruz's book in the first round by hitting a beautiful takedown as Cruz pursued him that looked as if it could have been lifted straight from the second Faber – Cruz bout.

Garbrandt's jab also teased an appearance—it is one of the sharper ones you will see in the UFC and yet frustratingly it has only featured a handful of times in his bouts. Again, Garbrandt was able to get Cruz stepping onto these.

Also peculiar was the addition of a lead leg front snap kick to Garbrandt's game. A weird choice for the boxer-wrestler: it is normally the property of the rangey, upright kicker such as Semmy Schilt or Joanne Calderwood, and it lacks the flash of his beloved cartwheel kick. But a wickedly deceptive kick which can sap fighters without them giving it much thought so never a bad investment.

Garbrandt faded a little in the fifth but the fight was already done and he was able to close to the clinch—eliminating any off chance of a late rally from Cruz. While Garbrandt was the star of the fight and is now the UFC bantamweight champion, Cruz is worthy of more praise in this performance than in any of his brilliant victories. The fight wasn't going his way from very early on, it kept getting worse in the middle rounds, and by the second time he had been flattened with a counter punch the vast majority of fighters would have broken. Cruz isn't a big puncher and has never pulled off a last minute finish, and yet he got up and got right back to work trying not just to survive, or save face, but to get the better of Garbrandt. Furthermore, Cruz had no excuses for himself after the fight in spite of the heated war of words leading up to it. As Jack Dempsey said, a champion is someone who gets up when he can't—Cruz lost the belt but has never more embodied the spirit of a champion.

While we're talking about the bantamweight division, which is quickly becoming one of the most interesting in mixed martial arts, we should recap a little of TJ Dillashaw's magic against the iron headed John Lineker. Right from the get-go, Dillashaw showed his old habit of getting his leg caught as Lineker bundled him over with little difficulty twice.

The rest of the fight was the usual array of Dillashaw looks—stance switches, v-steps, feints and waving of the rear hand.

One of the prettier set ups was a variation on the Chad Mendes special, slapping the lead leg and attempting to take Lineker's head off with an uppercut as the Brazilian retracted that leg anticipating a takedown.

TJ Dilly even found time for a couple of left body kicks beneath Lineker's attempted right hook counter. We discussed this in our pre-fight piece and it is quickly becoming a money technique against the Brazilian banger due to his reliable biting on feints and attempting to counter, and his considerable reach disadvantage against every bantamweight he faces.

The real game changer, though, were the takedowns. We discussed in the pre-fight piece that much of Lineker's dealing with takedown attempts has been snatching up the guillotine choke and attempting to tear the head off his man. Dillashaw's footwork, set-ups and posture seemed likely to make this a good deal more difficult. Throughout the bout Dillashaw struck or feinted into position to simply hook the lead leg and drop onto that Genki Sudo favorite, the double leg with the outside hook.

The ninja roll to the truck and calf crank attempt late in the fight was also a visual treat. Unfortunately calf slicers are very hard to finish against world-class fighters, as evidence by the grand total of one calf slicer submission in the history of the UFC. Though that is no reason not to try or explore the position, of course: there were no flying kick finishes in the UFC until relatively recently either. Eddie Bravo famously built a full system of leg locks from the truck position and looked to be doing some damage against Royler Gracie in their Metamoris grappling match.

A terrific weekend for the bantamweight division and from Cody Garbrandt one of the most surprisingly disciplined, thought out, and savvy performances of 2016. 2017 is already shaping up to be a great year for the 135lbs division.

Rousey versus Nunes: A Strange Kind of Mirror

The Tactical Guide to TJ Dillashaw versus John Lineker