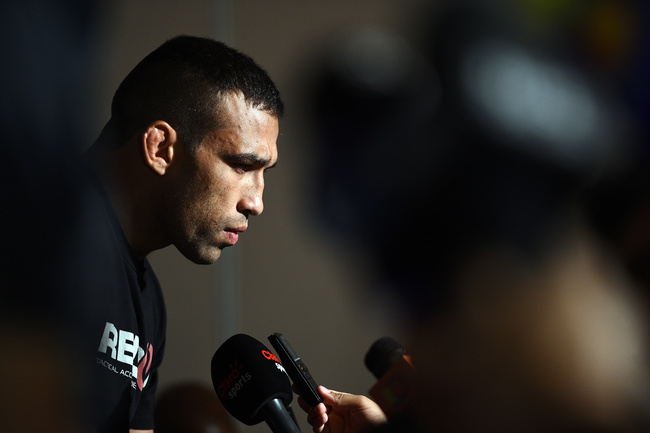 Cain Velasquez, the first Mexican UFC heavyweight champion (if you conveniently forget Ricco Rodriguez) finally made it to Mexico in an event put together entirely for him. Over three rounds he was battered, bloodied, and choked into submission. The man who pulled it off? None other than crafty old Fabricio Werdum.

How did Werdum add yet another top name to his record? Much of the narrative being pushed in the MMA media is that of Velasquez's discomfort with the altitude. There is something poetic about it, Velasquez was to be the UFC's golden boy in their attempt to break into combat sports' most active demographic, yet it was Mexico City which did him in.

While Velasquez—who Werdum infamously called a fake Mexican—was training at sea level in the United States, Werdum was acclimatizing himself to the altitude of Mexico City and speaking to the locals in their native tongue. It's reminiscent of Foreman and Ali's legendary bout in Zaire, in which Foreman's spurts of furious aggression left him exhausted and ripe for the knockout by the underdog.

Then, of course, there are the suspicions of ring rust. Or “cage rust” if you really want. And in fairness to Velasquez, that is to be expected. I've not seen a single fighter come back from a lay off of almost two years and look the same. They might still win, and that will convince some fans, but you'll see the change.

But the credit is due to Werdum. If the altitude was the big difference, he came in prepared. He up and moved his life to Mexico and put in the work at the altitude. And if we can bring ourselves to think that maybe the unstoppable Cain Velasquez was beaten by more than his own conditioning, Werdum deserves even more credit.

A Crisis of Range

Cain Velasquez's plan of action has always been a clear one: jab, loopy right, clinch. From there it's to the single underhook pin along the fence, using the head to stand his man up, and freeing one arm to punch. I noted in our pre-fight analysis, Cain Velasquez: The Absentee King Returns, that Werdum had struggled to fight out of the same position against the much worse wrestler, Antonio Rodrigo Nogueira. However, at UFC 188 Werdum's work from this position was marvelous. He was constantly controlling Velasquez's free arm—preventing the champion from punching—or pummeling his forearms in front of Vealsquez's collar bones to lock on the double collar tie.

Suddenly Velasquez's life was a lot more difficult. He couldn't just wing away with punches when Werdum had the DCT, because Werdum would cut his hips out to escape the fence and start trying to knee Velasquez in the face just as Demetrious Johnson so frequently does.

Velasquez's game isn't just to hold people in clinches—that wouldn't achieve very much at all. It's to constantly be making space for short, unanswered punches, knees, and elbows, diving back into a chest to chest clinch in between. Staying in a chest-to-chest clinch with a superior grappler is risking being tripped or even pulled into guard—making a little space to start hitting just gave Werdum room to jimmy his forearms in and move to the collar tie.

Clearly uncomfortable and ineffectual in the clinch, Velasquez spent more time out in the open. I have been pointing out for years how many blows Velasquez will take in the brief moments he is on the feet. In fact, I wrote a piece some years ago called “Cain Velasquez: Easy to Hit” or something to that effect.

The secret to Velasquez's success has always been aggression, and then if he gets tagged or clipped with blows, he is already in the clinch, or on the opponent's hips, and roughing his man up before it's an issue. He does, however, through his constant forward motion, one note striking, and poor head movement, run onto blows a fair amount. We talk about 'creating collisions' as a key to generating knockout power—Velasquez has often dived face first onto his opponents blows had wobbled his own legs in the process.

The exchanges between Velasquez and Werdum were, technically, atrocious. Both men had their heads bolt upright and their hands low, and both ate nearly a hundred strikes over the twelve or so minutes that they were battling, with both connecting at a rate of over 50%. Defensive savvy was nowhere to be found in this bout.

Both men getting tagged as they kick without set up and their head straight up in the air.

What was noticeable, however, was that most of the time Velasquez was connecting right on the end of his range, stepping in after his punches (this is a man used to punching into the clinch, after all) and then Werdum's returns would snap his head back, with a good three inches to punch through when they connected.

A while back, when the discussion of “octagon control” and rewarding the aggressor came up, that pressing forward ineffectually is only dictating the tempo and frequency at which you get hit. Nowhere has this been more clear than in Velasquez vs. Werdum. It was Velasquez setting the pace, but it was the pace at which he took damage. By the third round, Velasquez was exhausted. He had taken a few hard knees off of that double collar tie, and been tagged with punches each time he stepped in. In desperation he ran in for a takedown with his head down and no defense against the guillotine which Werdum slapped on.

While Velasquez's loss of the title in Mexico had to sting for the UFC, I cannot help but feel that this is one of those match ups in which Velasquez could make adjustments and avenge his loss. Remembering the success that Alistair Overeem had inside of Fabricio Werdum's guard in their second bout—completely neutralizing the Brazilian—it would have been interesting to see Velasquez commit to the takedowns before being begged by his corner as he stumbled around dazed. Frankly, the guard in MMA is just not an easy position to play. There are very, very few men who can submit a conservative, savvy, ground and pounder from closed guard unless he's making some real mistakes and swinging wild.

Obviously Velasquez's decision to not chase takedowns stemmed from caution over Werdum's guard, but his success has been as a multi-faceted threat, he cannot hold up as just a striker.

The UFC might be wise to keep Velasquez away from the title for a couple of fights so that he can prove he is actually able to get to the fight in one piece more than once in a blue moon. Certainly, there are a plethora of more interesting match ups for the new champion than the customary immediate rematch.

My advice to readers who haven't caught the match between Tecia Torres and Angela Hill is to avoid it. It was mind numbingly boring as Torres repeatedly took Hill down but was unable to advance her position from half guard, and was reluctant to attempt anything else.

While Melendez versus Alvarez didn't live up to expectations it had a couple of cool moments. Melendez's two intercepting elbows as Alvarez stepped in for his usual right to the body were the neatest. Alvarez has a habit of over-stepping as he moves in with his right hand, be it to the body or an uppercut, and ending up too close to throw his left hook. Melendez's pair of elbows exploited this nicely, but Alvarez's reassessment of the bout and moving to low kicks and takedowns showed a much needed savvy in a close fight.

Kelvin Gastelum gave the best technical showing on the card as he cut the ring beautifully on Nate Marquardt and battered him into submission. Though Marquardt went all out on a nice attempt at an arm roll which almost came off but at least allowed him to recover guard.

And Yair Rodriguez gave a fantastic performance on the ground and on the feet. Utilizing that low line sidekick to jam any advances from his opponent which he wasn't ready to counter or evade, Rodriguez showed again what a game changer that technique is. Honestly, if you're an MMA fighter and you've not yet accepted that this kick is a game changer for strikers, you're missing out.

There were also some nice switch kicks out of Rodriguez. It used to be that we thought bicycle kicks were all-out, kamikaze techniques, but between Saenchai, Conor McGregor, and young fighters like Rodriguez, we're starting to see guys throw them out as often as they would throw out a 1-2. And really that's what it is, the 1-2 or the kicking game.

A decent card overall, but noticeably under-advertised as the hype train rolls on towards UFC 189.