How Honor Blackman Brought Women's Self Defense to Television 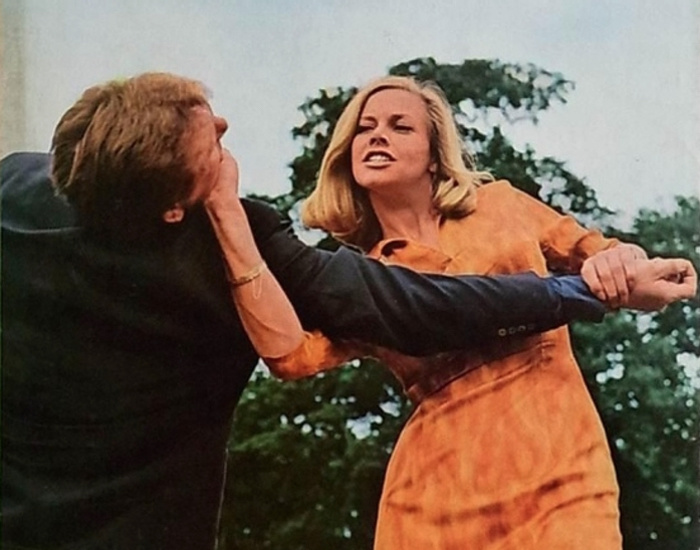 A half century after she first stepped into a dojo, Honor Blackman still hasn’t forgotten the ripe aroma of her very first judo lesson.

“It was on Panton Street and Joe and Doug Robinson were my instructors, and they said it was down in the basement,” the then 85-year-old actress recalled at a Reavenging The Avengers stage panel in late 2010. “I arrived at the premises and started to go down the steps... and the smell! Everybody’s sweating down there. And I got to the bottom and all of the mats were damp because everybody sweats and they’re breaking falls and banging like mad. And I fondly thought—quite rightly, I think—that I might have a private lesson. Not a bit of it! I was in there with the chaps. And there I was and I had to put gear on and everything, and they’d never had a woman before, so there wasn’t anywhere for me to change.

“There was this scraggy little piece of curtain in one corner and they said ‘Well, you go behind there and change.’ So I went behind there and there was a line of pegs with grotty jock straps and I thought ‘Well, this is going to be fun.’”

Blackman was hardly a shrinking violet before she joined The Avengers in 1962. As a child, she became known for her “terribly good uppercut.” (“When I was 10 or 11 I knocked out two boys who were bullying my brother,” she told The Telegraph in 2012. “I can’t stand bullies. My mother was horrified, but they had to learn.”) In her early 20s, she was almost trampled to death by a horse while shooting her first film appearance, a non-speaking part in Fame is the Spur and didn’t miss a beat.

So when the topic of martial arts came up during her audition for the iconic British spy series, Blackman was undaunted. “[Producer] Leonard White said ‘If you do this, you’d have to do judo. Do you know anything about it?’” she recalled during the Reavenging panel. “I said ‘No. Nothing. You’d have to teach me.’”

After shooting a few combat-free episodes as John Steed’s new partner, the self-sufficient anthropologist, museum curator, philanthropist, and martial artist Dr. Cathy Gale, it was Blackman herself who upped the ante and suggested that they start adding some of that judo that she was supposed to be learning.

“In one early episode the script said, ‘Cathy reaches into her bag for her gun.’ Now every woman knows, and probably every man knows, too, that if we reach into our handbags for something, 10 minutes later we find it. I would have been dead as a dodo,” she wrote for The Express in 2010. “So I said, ‘Couldn’t I do one of those judo things? Because I‘ll never get my gun out in time’. It so happened that one of the other actors on set had done some judo training, and he showed me a simple throw. I did it with such aplomb that it became a regular feature of the show.”

48 years later, Blackman was willing to admit that her attempt was a bit foolhardy. “Looking back, I think I must have been mad—I’d had no martial arts training whatsoever, and doing judo on a concrete floor is highly dangerous. My back still tells the story, and that sort of thing would never be allowed today.” 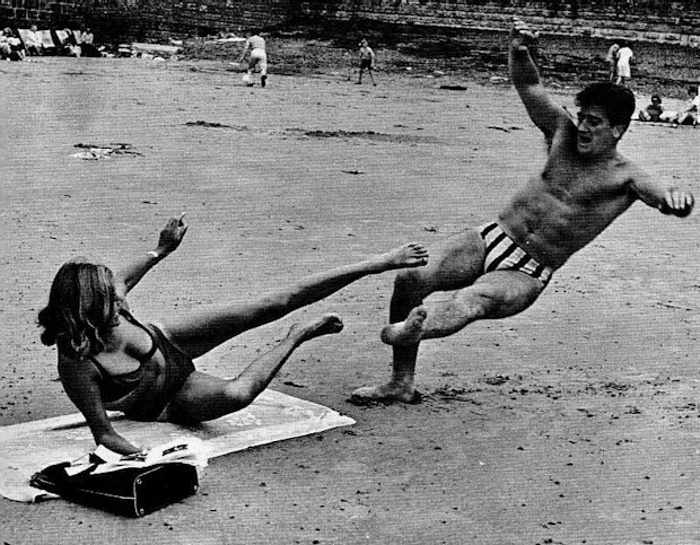 It’s unlikely that Blackman’s post-throw workload would be allowed by today’s standards, either. The actress has said that she’s never worked harder than she did during her two seasons on The Avengers, making an already tight filming schedule (fight scenes were often shot the night before episodes aired) even more demanding with weekly judo lessons and stunt choreography sessions. “No stunt artists, no retakes for us,” the actress writes in the Avengers section of her official site. “Looking back I can’t think how we did it! Lots of learning judo lessons, choreographing fights, sometimes three or four hours of wardrobe fittings, publicity fan mail—it was a helluva two years but I wouldn’t have missed it for the world.”

Although Blackman moved on from Cathy Gale after two seasons, handing the reigns and Steed over to Diana Rigg’s karate-kicking Emma Peel, she kept up her judo training with the Robinsons. She even had a brief to chance to show off her skills in her next and most famous role (at least Stateside—she was already a sensation back in her native Britain thanks to Dr. Gale) as the pilot Pussy Galore in Goldfinger, casually tossing Sean Connery’s Bond around before a roll in the hay. Her judo coaches also went along for the ride, and have done stunt work on a number of Bond films over the years.

After her Avengers labor, Blackman found the demands of being a Bond Girl a welcome change of pace. “The judo scene was a piece of cake after the stone floors of the studio,” she quips on her site. “Anyway, I have no objection to finishing up in the hay with Sean Connery!” 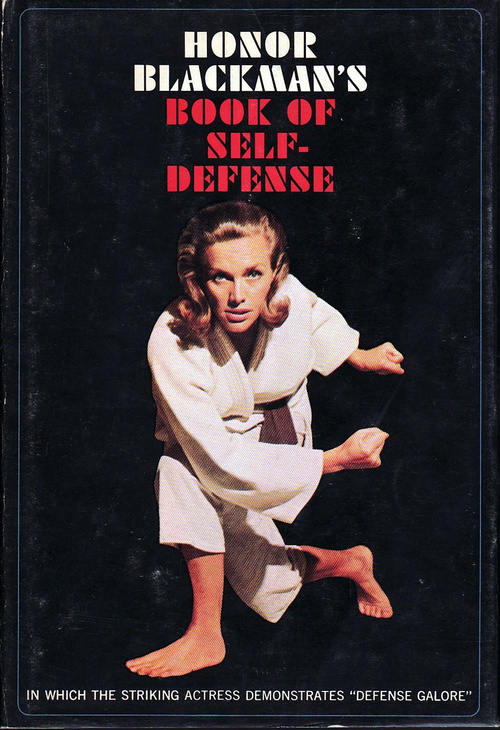 The year after Goldfinger came out, the Robinsons and Blackman, who had recently earned her brown belt in judo, collaborated on another project: Honor Blackman’s Book of Self-Defence. The book, a compilation of judo and karate-influenced techniques demonstrated in photos and described in text by the trio, was originally intended as a bit of a novelty item and a way to capitalize on her fame as Britain’s first action heroine. But it ended up striking a chord with her audience. Not only had the young women who idolized Cathy Gale never seen anyone who looked anything like themselves so capably handling themselves on screen—they’d never had anything like her book made for them, either. Although its techniques might seem quaint or even laughable by today’s standards, her book made history as one of the first of its kind to be made specifically for women. Bruce Lee was reported to have a copy in his extensive library of martial arts books. 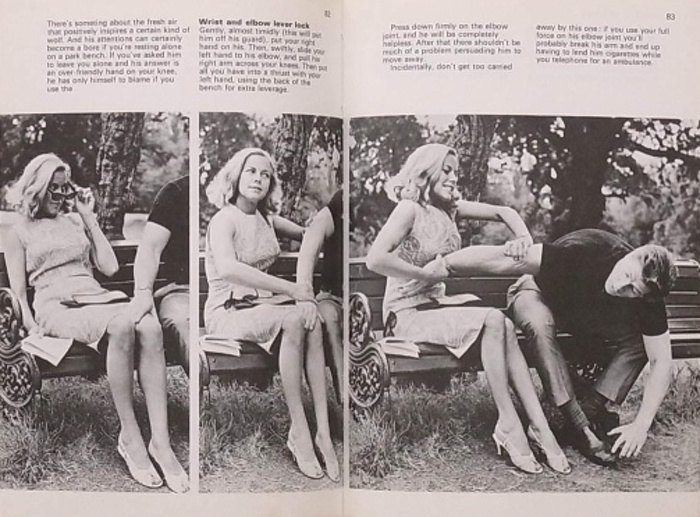 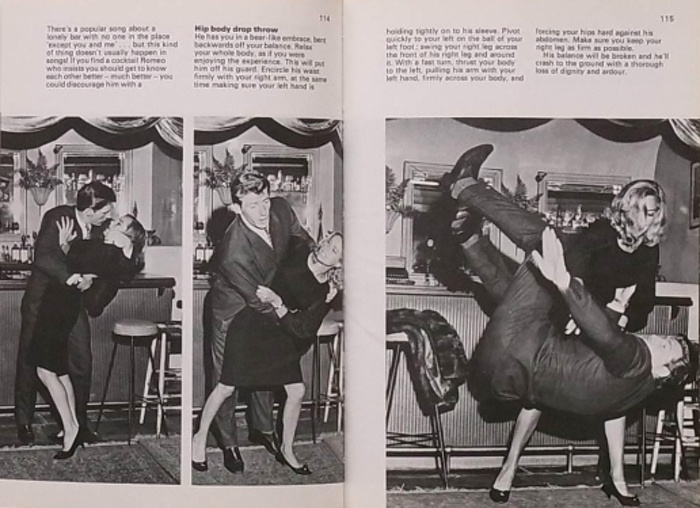 Honor Blackman’s Book of Self-Defence became popular enough to merit a U.S. release the following year and a profile in the May 20, 1966 issue of Life Magazine. “She encourages pretty young things to take up judo purely as a precautionary measure,” the article, ripe with mid-‘60s sexism, explains. “If a man were going to attack someone, he’d be a fool to pick me,” she says. “So I’ve never had to use judo in real life, though it’s a relief to know I could. But it’s great for the figure, good for the nerves and nice to have tucked away for disasters.”

The article goes on to assure readers that Blackman doesn’t hate men and she only trains before appointments with her hairdresser because of what judo does to her hair.

Although Blackman had few chances to show off her skills on the screen or page after Goldfinger and the book, she remained vigilant in both her own self-defense and her lifelong quest against bullying. “I once got out of my car to intervene in a fight between a couple of boys because it was so unfair,” she told The Telegraph. After bragging about karate chopping a co-star or two in her day, she goes on to admit that “I don’t think I could do that stuff any more.”

Now 91, Honor Blackman is proud for the ground she broke for women in action series and films and women on sweat-soaked mats who no longer have to change next to jock straps at gyms that aren’t ready for them. And she’s not shy about giving herself her due, either.

When football broadcaster Adrien Chiles was first starting out, Blackman told the crowd at her Reavenging panel, he interviewed her and asked her who her roles models were when she began filming The Avengers. “I thought that was a weird question,” she smiled. “I said ‘I was the role model.’”