How Jake Gyllenhaal Got Into Fighting Shape for 'Southpaw' 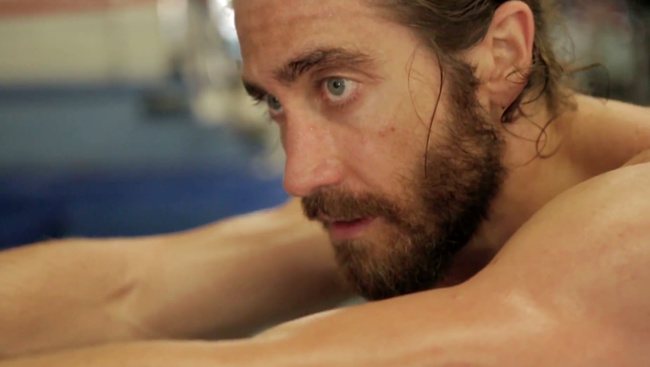 We’ve heard a lot about what actor Jake Gyllenhaal put himself through in order to gain 10-15 pounds of muscle and transform into a boxer for the forthcoming drama Southpaw: six months of grueling twice a day training sessions with the film’s director, Antoine Fuqua, sparring with fighters, and even taking a shot or two from his co-star, Welterweight boxer Victor Ortiz. And now we finally have some video proof.

This week, the Southpaw team released a training montage of sorts that features Gyllenhaal flipping a tire, doing push-ups, working on a versaclimber, and barreling through some padwork in order to prepare for his role as the beleaguered former champ Billy Hope. (For those keeping score on the stance front, he does spend a lot of his training time in the orthodox stance, but there’s what appears to be a brief glimpse of southpaw in the accompanying film footage).

“I said ‘Jake, you have to train like a fighter,’” Fuqua explains at the beginning of the clip. “I can’t have you faking it. You have to be in the gym twice a day, every day. Even on Sundays.”

Fuqua, a longtime recreational boxer himself, was so committed to Southpaw, and to Gyllenhaal’s involvement in the project, that he joined the actor at the gym for all of those sessions.

“I knew nothing about boxing when I started, really,” Gyllenhaal admits later in the video. “And I knew that, in order for me to pull it off in any way, I was just going to have to learn how to do it.”

In a recent interview with BBC radio’s Chris Evans (the new Top Gear host; not Captain America), Gyllenhaal took time to point out that he didn’t just put in all of that physical work for esthetic reasons. He didn’t want to look like a boxer; he wanted to actually become one.

“There’s a misunderstanding about the reasons why I particularly do what I do. I didn’t know how to box before I started this move and the way we were going to shoot it was as real as possible. And I just tried to spend almost five hours a day learning how to box.”

His new, ripped look was simply a byproduct of all of that hard work. “Over time, you get into shape... that’s the result.”

Gyllenhaal expressed similar sentiments in an interview with Entertainment Weekly in April: “There’s a tremendous physical aspect about getting into shape or learning how to box, but for me, you can’t play a boxer and just look like a boxer. That doesn’t make sense to me, in my mind. To play a boxer, to play any role, you have to be believe that you can exist in that world, or else your confidence in the scenes and your interactions with every character—particularly in a movie like this where you’re working with real fighters—is a waste of time.”

The actor feels confident that the time, heart, and bodily fluids he put into Southpaw will be evident in the final product. “You spend how many thousands of hours in the gym with lots of other people’s sweat and your own everywhere. Then that will be in the movie. The audience will feel that. It’s fun. It should be fun.”

Southpaw, the story of a former boxing champ named Billy Hope (Gyllenhaal), who must fight for both the custody of his daughter and his pride after the death of his wife (Rachel McAdams), opens in theater across the country on July 24.