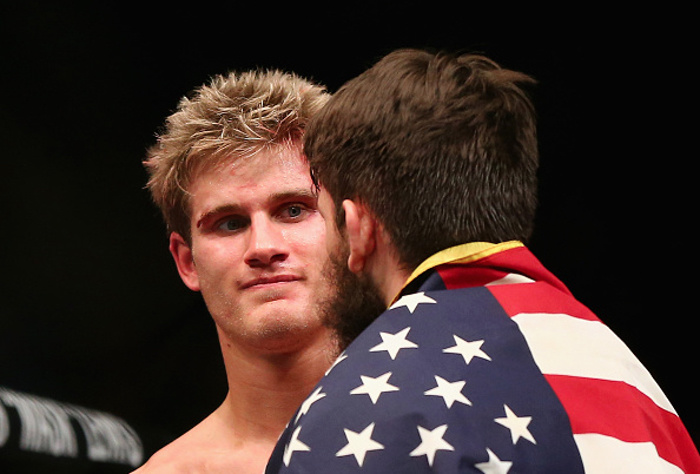 Anthony 'Rumble' Johnson added another knockout to his impressive collection on Saturday night and simply supplied more evidence to the often repeated thought that he might be the heaviest hitter in any division. His unfortunate victim, Ryan Bader is now back to nought in a division which has rewarded him so little even in times of success. There's not a whole lot to tell you about the fight because it was firstly so short and secondly the bout was more given away by Bader than it was taken by Johnson.

Bader showed significantly improved striking in his last few fights and yet at the opening bell he did absolutely nothing to hide the fact he was going to shoot. He shot long and telegraphed, and Johnson easily sprawled on him. It seems strange that Johnson has repeatedly proven himself so strong in fighting off takedowns, so powerful in the early rounds, and also prone to dropping off in the later stages yet fighters continue to try to take him down straight off of the bat and are surprised when they cannot.

Johnson circled around the turtled Bader, who grabbed a kimura and attempted to squirm back to a guard of some sort. Johnson mounted, Bader had to let go of the kimura, and Johnson pounded him out from mount. It wasn't a pretty or eventful fight, but the gameplan of Bader—who is a very solid fighter all around—boggles the mind.

The thing about Johnson is that he is a confrontational fighter. He has the power and the chin to win even the most even of exchanges, he uses his hands to parry, push and smother, and directly fights off takedowns by lowering his hands and sprawling.

When the opponent changes level, so do Johnson's hands.

In a fight he's a nightmare. It is in the interest of anyone put in the cage with him to turn the engagement into a bout. The meta of takedown defense has shifted more to the denying of opportunities for the takedown through proper movement and distancing than simply shoring up defense. The great danger of walking forward until the opponent shoots and then sprawling on him is that when an opponent starts throwing level changes in their striking combinations—a la Frankie Edgar and Eddie Alvarez—you start reacting to takedowns and getting hit with punches.

Mirko 'Cro Cop' Filipovic was brilliant at walking men down and sprawling on them when they shot. His most famous knockout loss came as he went to sprawl on Kevin Randleman but ate a left hook to the jaw instead.

But the point I'm making is not 'do this and you can knock out Anthony Johnson'. The simple act of being caught out will make anyone hold off a little longer before they react how they normally would. Just as in striking, you raise your rate of success by dulling the opponent's reactions with variety and misdirection. To see this in action you need only watch Chuck Liddell's first fights against Quinton Jackson and Randy Couture. Alternatively, watch Alexander Gustafsson strike Jon Jones and Daniel Cormier into a kickboxing match, and then take them both down with far less resistance than you would expect from both. Everything at the top level of the fight game has always been about deception, if a fighter comes out at the elite level of the business in a fight where most assume he will be looking for the takedown, and then shoots straight off the bat, he is giving the opponent circumstances more perfect than they even allowed themselves to train for.

Johnson moves forwards, presumably to a fight with the winner of Jon Jones versus Daniel Cormier II provided there doesn't need to be an immediate rematch between them.

The other loss which launched a hundred headlines on Saturday was that of UFC poster boy, Sage Northcutt. Northcutt tapped to an arm triangle from half guard before his opponent, Bryan Barberena could pass the guard and dismount to the side as is usually necessary to achieve full pressure on a kata-gatame style arm triangle. The unusual timing of this tap has the MMA community and a few of the crueler fighters questioning Northcutt's heart. I can't tell you the contents of another man's head, but I can point to the most interesting parts of the bout to my eye.

Northcutt made a lot of mistakes in his ringcraft and general defensive awareness. The kind of stuff that didn't matter so much in the regional promotions he came up through where his athleticism could hide these errors. When Northcutt closed the distance it was almost exclusively by pumping straight punches—rear hand first—in the karate style that gets Lyoto Machida into trouble so often on the lead. He'd rush in like this, Barberena would hit the fence, and Northcutt would concede double underhooks and get turned around and kneed.

Problematic if your gameplan is normally to charge in, change levels and hit a huge double leg pick up off of the fence. Northcutt did manage to score his straights  as Barberena was stepping in on one occasion, resulting in a knockdown, but Barberena almost immediately worked his way up and turned Northcutt onto the fence again.

Northcutt's lack of defensive considerations after throwing punches was the main worry though. He'd commit himself to throwing a hard right hand, and eat a hook in return. This happened more and more as the fight progressed.

The ending of the bout has been picked to pieces by everyone, but how Northcutt ended up there is perhaps the most telling part of this fight. Northcutt missed a right, stepped through and tumbled into a kaiten-geri / rolling thunder kick. This sort of stuff is such a terrible idea against a guy who wants to take you down, and any time outside of the last half minute of a round. Even if you have an excellent guard, it's exceptionally hard to stop a decent top player just holding you down for the remainder of the round and in a sport where takedowns equal rounds won, it's just so daft to do this sort of thing. Doing it thirty seconds into the second round against a guy who only really wanted the takedown was an awful idea and Northcutt spent the rest of the fight on the bottom, getting elbowed as Barberena did what we've seen his team mate Benson Henderson do on many occasions in forcing the half guard and grinding up from there.

A great step forward for Bryan Barberena, and a wake up call for Northcutt who needs to slow things down and understand that the best in this sport succeed through gifts and strategy, and that all the athleticism and talent in the world means little if you routinely handicap yourself by giving experienced fighters easy opportunities.

On the subject of ringcraft, I firmly believe that if Northcutt continues his training with Firas Zahabi he is in the right place to learn it. After moving to Tristar and going a year without a fight, Tarec Saffiedine came back looking terrific. Jake Ellenberger has done great work in the past as opponents back onto the fence, but Saffiedine did a great job of circling out whenever necessary. In addition to improved movement and ring awareness, Saffiedine has begun to develop that Tristar jab—but being a natural switch hitter he has started to utilize it off of both stances. A truly interesting and unique development which gave his opponent, Jake Ellenberger, fits.

Ellenberger landed two cracking blows on the exits from clinches—so often a moment of lapse in defense among fighters—but ultimately was outmaneuvered and outstruck. Ellenberger has been in love with his hands for years but desperately needs to add some kicks to his game. They don't need to be Saffiedine style, perfect rotation, leg mincers. Just the short, thudding low kicks which will hold a man in place to move in with the punches Ellenberger adores.

A final thought for Ben Rothwell, who has now knocked out a K-1 Grand Prix champion and submitted the Metamoris heavyweight champion. He's not a pretty fighter, but he keeps shoring up problems and making himself more effective. It doesn't matter how attractive your fighting style is when it's clearly winning fights so decisively. I gushed praise for Rothwell's slight adjustments in his use of smothering hands last week, but he made Josh Barnett very uncomfortable in the standing portion of the fight. When Barnett lingered too long with his head low, Rothwell snapped up his strange hugging / five finger guillotine hybrid and tapped out the great catch wrestler. In a fair world, Rothwell would deserve a title shot but with the state of the heavyweight division I would advise you not to hold your breath.

Sage Northcutt: What We Know So Far