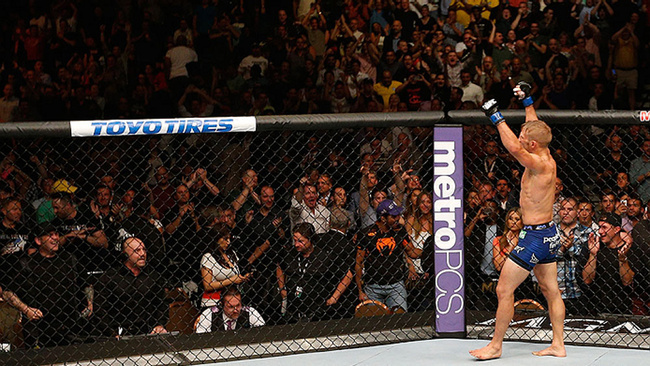 At UFC 173 we were treated to a beautiful upset. TJ Dillashaw peppered Renan Barao with strikes from all angles and Barao just never found an answer.

The event was a grand one. We saw Katsunori Kikuno continue his attempts at career seppuku, while getting soundly drubbed by a much improved Tony Ferguson. We saw Mike Chisea look all kinds of desperate on the feet but incredible when the fight hit the mat. We enjoyed Daniel Cormier channeling his “Black Fedor” as he rag dolled Dan Henderson, and we saw Robbie Lawler tune up his fists against the tough, but overmatched Jake Ellenberger.

Rather than desperately appeal to Katsunori Kikuno's team to return him to the stance which he used to get the better of Eddie Alvarez on the feet (do yourself a favor and watch that fight, Kikuno was incredible once), or focus on Robbie Lawler or Daniel Cormier's showcase bouts, today I would like to focus on TJ Dillashaw, and how he Killed the King.

Beginning at the End

For 23 minutes, T. J. Dillashaw made Renan Barao look like he didn't belong in the cage. Through four and a half rounds he picked at Barao and darted in and out with shots until finally the end came in one of the exchanges.

Last week we spoke at length about Barao's tendency to swing wild whenever he leaves his one-or-two-at-a-time punching formula.

At the time, I said that Barao's recklessness in exchanges lead me to believe that his title reign would end with a bang rather than dropping by a pedestrian decision, but I could never have imagined that Dillashaw would be the man to pull it off.

The final exchange highlighted exactly what we talked about in Barao's game. Once he gets past the first punch and into an exchange, his defense disappears. He leans forward at the waist, sticks his chin out, and drops his non-punching hand, swinging wild.

In the final round, after being out pointed and picked apart out in the open, Barao bit down on his mouthpiece and swung, and it played right into Dillashaw's hands. Dillashaw, who keeps his hands ready, moves his head, and doesn't throw himself off balance, just picked Barao apart in this final exchange and dropped the champion to the mat, following to pick up the finish.

Naturally, now that Barao has lost, the forums are flooded with people claiming that he was never that good or—more bafflingly—lost because he doesn't know how to counter punch. While I criticized Barao's boxing in my Killing the King piece, I think it is a gross oversimplification to say that he lost due to an inability to counter punch.

Firstly, Barao has great counter punching when his opponents meet him on his own terms—one charge at a time. Urijah Faber was met with counter jabs and left hooks in both his meetings with Barao as he charged in wildly with punches.

What Barao versus Dillashaw illustrated amply was the difference between boxing and punching. Barao can hit hard, we all know that, but he winds up and throws hard on almost every punch. Dillashaw wasn’t always landing headache makers, but he was consistently landing, and those add up. The pace alone wore Barao down to a husk of his usual self by the final round, and the swelling around Barao's eyes should tell you that landing at all, when landing consistent, is landing hard enough.

What really complicated the process for Barao, and this is another thing we discussed last week, was that he wasn't just given opportunities to counter punch. In his matches with Urijah Faber, or Michael McDonald, they would plod or bounce around a bit, then run in swinging. But smooth Eddie Wineland, whose performance I was very impressed by against Barao, had Barao loading up, waiting on a hair trigger, and then counter punching at thin air throughout their bout.

And that was what Dillashaw did. He feinted, he faked and he darted in and out all fight. Barao had no idea when it was coming and so couldn't load up on his usual counter punches. One thing that Dillashaw did throughout (we also looked at this last week) was to use what Eddie Alvarez calls The Dart.

Stepping in with a rear straight punch, Dillashaw would hop out to the angle, facing in at 90 degrees to his opponent, and throw another good punch. He did this a good few times throughout the bout and landed the second punch almost every time, after stunning Barao with the first punch. Angling off the rear straight like this is such a wonderful technique because it is very difficult for the opponent to make you pay if you're moving and you disguise your timing. You're through the front door and out through the side door before they have time to get into the hallway and confront you.

From a southpaw stance, this technique is a favorite of Giorgio Petrosyan, generally thought to be one of the finest kickboxers in the world.

In old Japanese martial arts lore there exists a technique called sankaku-tobi—the triangle leap. It is performed by jumping out and around your opponent and ending up behind him. You won't be able to do it Ong Bak style, but the closest thing you can try without magical wire work powers is attempting to skip straight across the opponent's back off of the dart.

Dillashaw does it here in an exchange, missing the second punch but immediately following with a jab as he turns Barao.

And here is Roy Jones showing the idea at it's finest. Hard to do, but pretty awesome if the circumstances work out right.

Nobody is invincible and no one tactic is unstoppable. I know that fight fans like to talk up champions to near deity status (just check out some forum posts about Dillashaw's chances before this fight) but a fight is a game of questions and answers in strategy. Dillashaw fought a phenomenal fight that was tailored to Barao. Had Barao fought another way, or Dillashaw not have watched his Ps and Qs, Barao could have troubled Dillashaw.

One of the main factors that was conspicuously absent from Barao's performance was his low kicking game. He landed a few, and I'm sure they hurt, but there was nothing like the commitment to it that he normally shows. That is because Dillashaw took the kicks away. As we said in Killing the King, if you don't know where to start with an opponent, it is best to take away what they do well and force them to fight their B game.

Dillashaw's feet were often underneath him as he danced and circled. This meant that to kick them Barao would really have to step in and go after them, there was not one leg out in front being presented as a target.

This is one of the trade offs of fighting—the more staggered your feet are in your stance, the more you can drive off of your back leg to create power. But, by squaring your feet you deny the target for the low kick and can move more freely laterally. If you start running in to try to land low kicks against this sort of stance, especially against a strong wrestler, there's a decent chance that as you lunge to kick that leg, they will step in through you, take the kick, and plant you on your back.

Though he didn't display much of it in this bout, Dillashaw was “the wrestler” and that had to be Barao's primary concern coming in. When McDonald and Wineland were troubling Barao on the feet, he moved to the clinch or shot for takedowns. The fact that he was so reluctant to attempt that against Dillashaw even when getting beaten up on the feet should tell you that even in absence, Dillashaw's wrestling played a huge part of the fight.

This distance which Dillashaw kept, and having his feet underneath him—ready to move laterally—really showed when Barao attempted his usual spinning kick. Barao is very much a minimalist: great jab, great overhand, great right low kick, good right back kick, and that's about it on the feet. When he runs out of ideas, he goes to the back kick. Against Eddie Wineland, it paid off. Against Dillashaw it became obvious that the Team Alpha Male representative had been training for it.

When a back kick comes at you, the best thing to do is treat your opponent like a revolving door. His back becomes the section of the door you can walk into. You follow it around and stay in his blind angle for as long as possible while his kick misses. He is left in an awkward position, off balance and craning his neck to see you as you come back in with punches.

Just look how far Barao has to turn his head to find Dillashaw, who is already coming back with punches. This happened every time Barao threw the kick. The distance that Dillashaw kept between them for most of the fight meant that if Barao wanted to kick, he had to move toward Dillashaw first, telegraphing his intentions.

So where were the weaknesses in Dillashaw's performance? Well, he still steps with a great many of his strikes. That is, he changes stances mid attack. This makes it very hard for opponents to keep up with him, causes his punches to enter from unusual angles, and allows him to get to new angles in relation to his opponent. But it also means that he is off balance while he attacks. If you take a good wallop during a stepping combination, youwill lose your footing far more easily than if you stayed in one stance throughout.

This kind of combination. It only appeared a couple of times against Barao, but it's still there.

The best example I can give you of that is Dillashaw's only knockout loss, against John Dodson. As Dillashaw ran in, Dodson gave him ground (unlike Barao who stood and tried to swing) and wobbled him. Dillashaw was so off balance that although he was clearly conscious, he was never in a position to recover his stance and the fight was called off.

Dillashaw's last loss came against Raphael Assuncao. It’s is worth noting that one of the things that Assuncao does so well is very important in out-striking someone like Dillashaw (with all his feints and charges). Against Mike Easton in particular, Assuncao came right from his guard on his jabs with almost zero telegraph. It looks strange, and it doesn't look like it should do the damage, but it takes very little exertion and it punishes an opponent for stepping in aggressively as he provides the force for the collision.

But that is all speculation for another day, for now let's just revel in Dillashaw's incredible performance and applaud him for being able to do what thirty other fighters haven't been able to—beat Renan Barao. 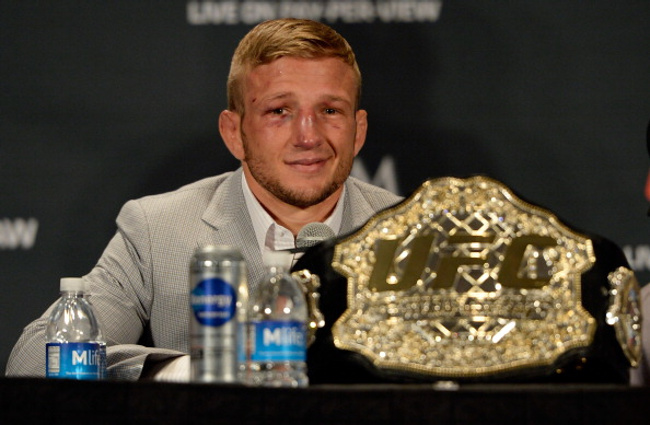 Pick up Jack's e-books Advanced Striking and Elementary Striking from his blog, Fights Gone By. Jack can also be found on Facebook and Twitter.