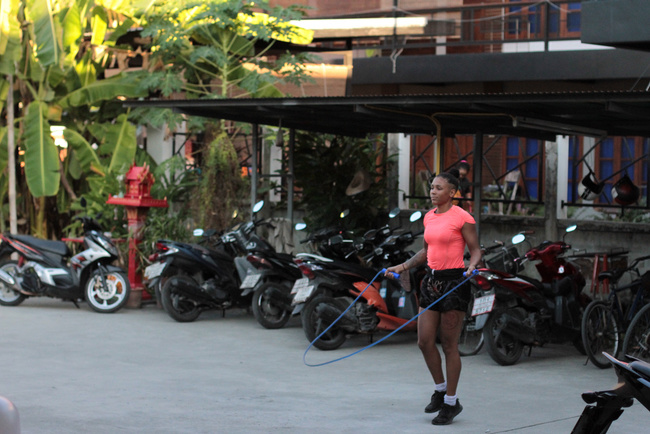 Twenty minutes in, the gym is packed with Santai students getting ready, skipping rope, wrapping hands, gloving up. They take up the checkerboard mats in front of the mirrors. They find space between the punching bags. They spill out onto the mats in the parking area.

Nik makes rounds of the gym, a look of concentration on his face. In his hands is a roster of non-Thai names, two pages long. Dates head the top of each column. Xs and check marks are spaced around the page. Some rows are marked with Nik's pencilings, some are conspicuously empty. Nik is taking gym attendance. 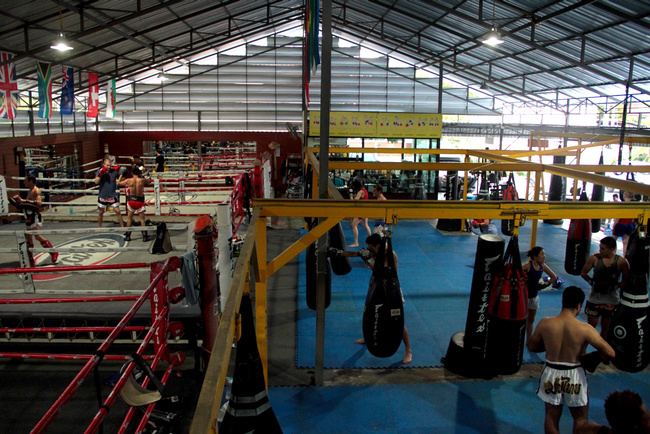 Santai Gym, in the San Kamphaeng district outside the northern Thailand city of Chiang Mai, is a foreign-friendly gym that focuses on imparting solid technique and training, not on giving their foreign students the "Muay Thai holiday" experience. No swimming pools, no cross-fit classes, no fun weekly field trips.

The gym was established in 2002 by Thai champions Daodern Pinsinchai and Anantachai Pinsinchai. In its early days, virtually all its fighters were Thai. The student demographic changed when a Canadian gym owner made a deal with Santai's owners to open a sister-gym to Canadian-based gym Siam No. 1. In 2010, with business having slown down to a crawl, Anantachai approached his friend and former classmate Ood, asked if she and her Swedish husband Nik Hjalmarsson wanted to take over the gym.

Ood and Nik agreed, wrote up a new contract with local temple and land owners Wat Santai, renovated the gym, and reopened. After the first few slow months of trial and error, business started picking up and has been steady ever since. 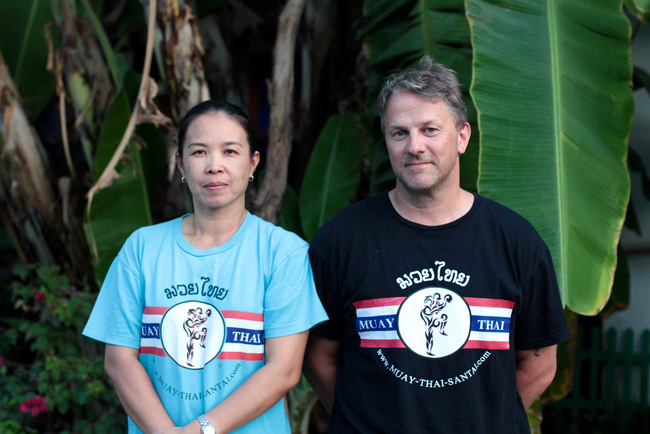 Part of Santai's success in providing a high level of training specifically to an international clientele is their policy of capping attendance: no more than three students per trainer. Currently Santai boasts eight trainers, limiting the student population to 24. "Everyone has a bag, everyone has a trainer. No one has to wait for something or someone to work with," Nik says, of the reason for an attendance limit.

It gets complicated, however, when people pay for bulk sessions but cancel last-minute or are repeated no-shows. Plus, it's easy to cap how many foreigners can live and train at the gym, especially when they make reservations in advance. But how do you cap drop-ins?

For a gym as effective as Santai aims to be, organizing the sessions is challenging. Hence the attendance sheets. 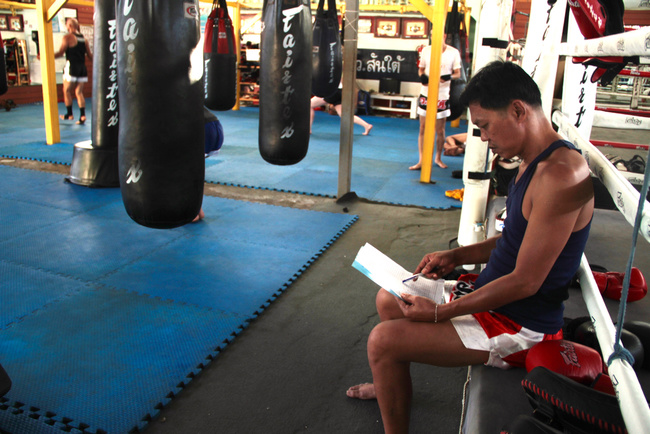 Taking attendance manually on actual paper is not common in Thai gyms. Most gyms feature a head trainer who makes mental notes of attendance, and pairs up the students/fighters with appropriate trainers as he sees fit. That's only if a gym actually has a large number of foreign or otherwise new students. Many Thai gyms have only a handful of fighters, which requires little consideration as to who should train with whom. Not so at Santai, where the foreign student population can often approach or even exceed the attendance limit.

Next in Santai's training organization is figuring out the student-trainer pairs for the day. With completed attendance sheet in hand, Nik and his two veteran trainers, former Golden Era fighters and twin brothers Kru Phon and Kru Lop, sit down on the side of the ring and assign each student to a trainer. Nik helps, as does Lop, but as head trainer, Phon has the final authority. "Kru Phon has been here since the start," Nik says. "I have a lot of opinions but I always ask Kru Phon." 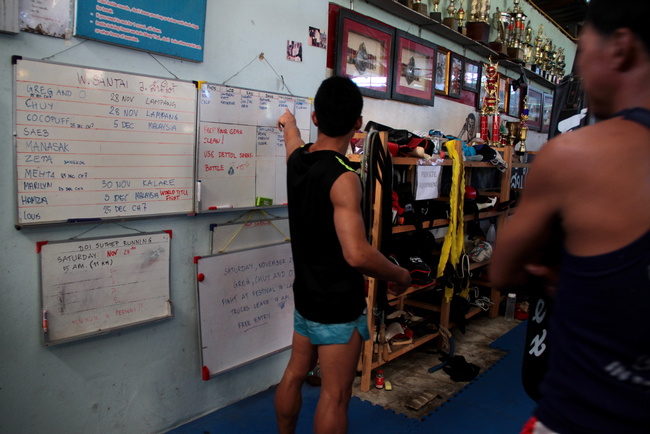 Nik, Phon, and Lop then move to the whiteboard on the wall, listing each student's name under the trainer with whom they'll be working that session. When the names are up, the gym's foreign students crowd around it like high school theater kids checking the call-back list after an audition.

This is the day-to-day operations, but all training follows a pattern starting with Kru Phon and Kru Lop. When newcomers arrive, their level is assessed on the first day. At Santai, that means training their first session with one of the twins, Lop or Phon, who then determine the best training program for each individual. Total beginners are generally placed with Lop or Phon until their technique is up to par, at which point they can join the more advanced students working with Santai's six other trainers. 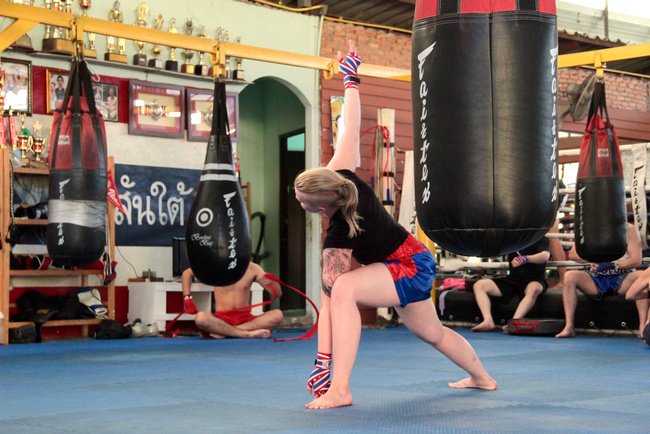 Phon and Lop train the so-called beginners, but in Thai gyms that host foreigners, "beginner" can mean a lot of things, and doesn't necessarily correlate with how long one has been training. "We have two people who have been training for months in the south [of Thailand]," Nik says, "but they still need to go through the basics because they can't kick. They kick football kicks; they need to learn to put their hips into the kicks. So they'll stay there [in the 'beginners ring' with Phon and Lop] until they learn."

Kru Phon is strict about technique. He sees the same thing over and over: foreign students who tell him they've been training a few months or even years back in their home countries, yet can't even throw a proper kick. When he asks who taught them, more often than not, they say a Thai trainer in their home country. This is one of his pet peeves, unqualified Thais who teach Muay Thai incorrectly abroad.

"Some Thai people who know nothing about Muay Thai are able to teach abroad because they speak English, but they teach bad technique," Phon says. "Some of them have never fought, or have fought maybe once at a festival. But because they speak English and are Thai, everyone thinks they're Muay Thai trainers. But they teach incorrectly. They don't explain why you have to keep your hands up, why you have to twist your hips when you kick. I'm afraid they'll destroy Muay Thai, point it in the wrong direction abroad. This is a big concern of mine." 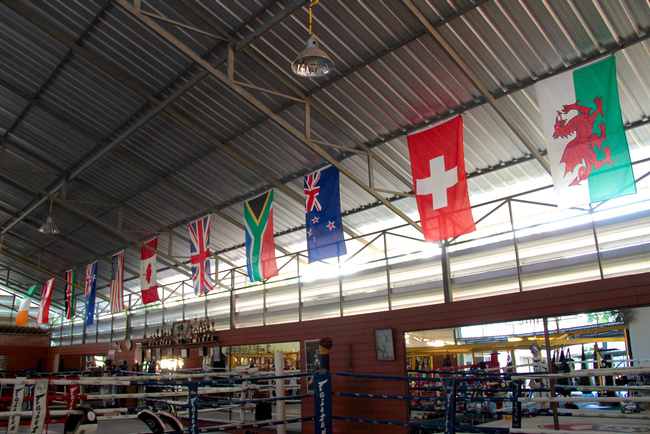 Phon is doing what he can to combat this, overemphasizing proper technique to his beginner students, giving them a solid base. After successfully passing Santai's (read: Kru Phon and Kru Lop's) core requirements of basic Muay Thai, students then progress to the gym's other trainers, all with their own specialties. Though Phon and Lop do train advanced foreign fighters as well, few fighters stay with the twins long-term; Santai needs them for the plethora of beginners it regularly receives.

For the intermediate and advanced fighters, gym management has a general theory on how best to train them: move them around and give them variety, the reasoning being that exposure to multiple trainers produces well-rounded fighters. "You should get input from everyone," Nik says. "At some gyms, you just hook up with one trainer and you're with him the rest of your life." 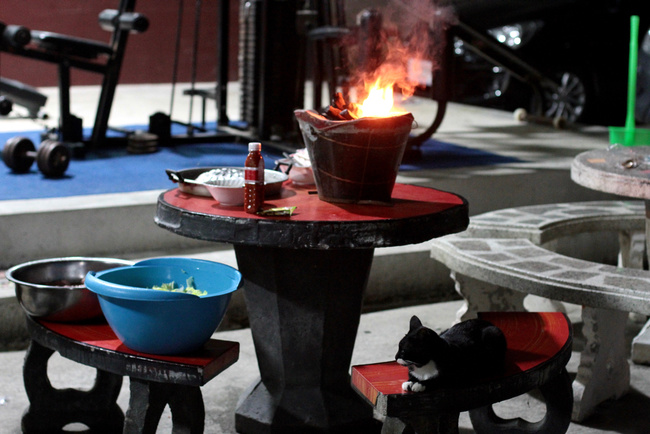 Fighters at a higher level are permitted to work exclusively with one particular trainer long-term if there is a connection, though Nik still has reservations. "I think it's breaking people's development [to stay with one trainer exclusively] because I think every trainer can teach you something new."

But what about receiving conflicting input? After all, each trainer, like each fighter, has their own style. At Santai, though, conflicting styles is not of much concern—Santai's trainers may come from different areas of Thailand, but they've all spent much of their formative Muay Thai years at Pinsinchai Gym in Bangkok, thus supposedly share the same "Pinsinchai style."

It's different for students on fight programs. "The last two weeks before a fight, you're with the same trainer," Nik says. "You don't mix trainers before a fight because it might be confusing."

When students ask to be placed with a specific trainer, however, management is usually happy to accommodate, provided the basics are down. But then again, "Even if you don't have basics, you can still train a session with anyone," Nik adds. "It's not a strict system. We just want to see progress." 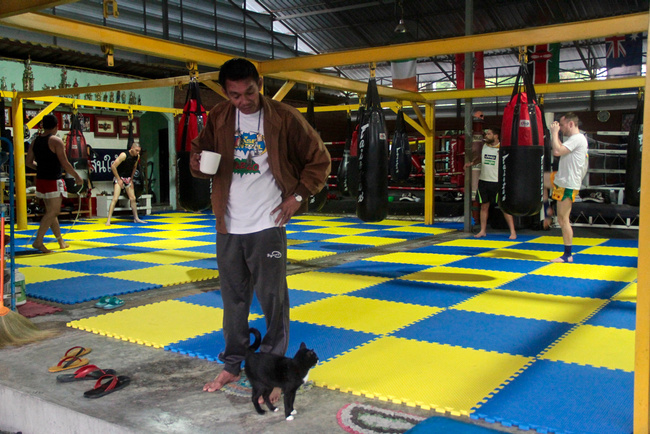 The gym is becoming increasingly known for its roster of famous Thai fighters-turned-trainers as well, boasting names like Thailand Pinsinchai and Manasak Pinsinchai. Another trainer, Keng, is also an active fighter in Thailand's top stadia. The older trainers, Nan, Dang, Phon, and Lop, are all former Golden Era fighters born in the 1960s. "What they don't know about Muay Thai, you're not supposed to know," Nik laughs. 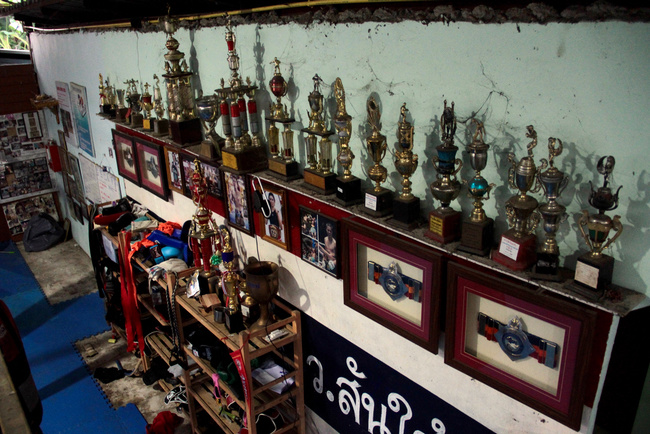 "That's something, you know?" Nik says. "We want more high-level Thai fighters here. That's why we have Manasak and Thailand here."

With Thailand Pinsinchai now part of the Santai team, the gym recently acquired two of his top-level students, Prakraiphet Nitisamui (a Channel 7 champion) and Yodwandee "Yokphet" Nitisamui (a tournament champion at Channel 7), both in their mid twenties and both active fighters in the capital. If all goes according to plan, Santai fighters will be making trips to Bangkok every month. "That was the goal from the beginning so we're going to keep going with that," says Nik. 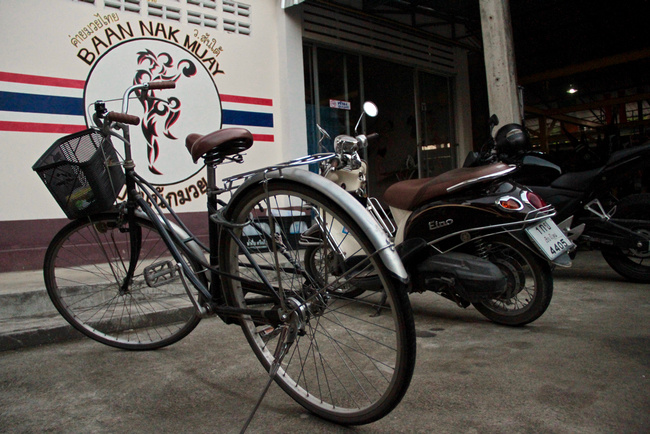 It's a challenging balance—focusing on training foreign students of all levels, but also on developing top Thai talent as well. Many gyms can't handle both goals. It's common for gyms to start accepting foreigners only to find that the foreign customers are not happy with the attention or training they're receiving as the gym is so focused on their promising Thai fighters; or the development of the Thai fighters goes by the wayside as all resources are funneled into caring for the high-paying foreign customers.

With its acclaimed trainers and careful management system, however, Santai may be one of the few gyms to achieve the balance for which it strives. If student loyalty and protectiveness is any indication, Santai is doing well. One foreign student I interviewed about Santai training asked me not to write anything about the gym. "We don't want people to know how good this place is because then it'll be overrun," he said.

"A lot of students say we're much more technique-oriented than a lot of other gyms," Nik reports. "I think we should be. If I see a trainer just trying to wear the students out, not teaching, I'll tell him, 'Hey, you're supposed to teach.' If I see a student doing a technique backwards and the trainer's not saying anything, I'm going to tell him, 'You're not teaching.' We're not paying the trainers to say, 'Oooay!' and hold up pads. We could train a monkey to do that."