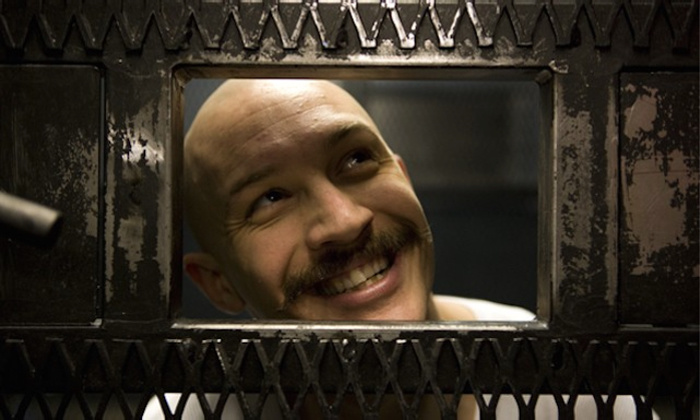 Although Legend, the drama about the infamous English gangsters Reggie and Ronnie Kray that will be released stateside this fall, is getting mixed reviews so far, everyone seems to agree that its star, Tom Hardy’s, transformation into both brothers is nothing short of miraculous. It’s not just critics who seem to think that way, either. One of the Kray’s longtime associates, a hitman named Freddie “Brown Bread Fred” Foreman, was completely stunned when he saw the 38-year-old actor in character as Ronnie. And none other than legendary boxing coach Freddie Roach, who was brought in to help Hardy prepare to play the brothers—both of whom had amateur boxing backgrounds—was so impressed by the star’s skills that he told reporters that “he could step in the ring for real.”

It really shouldn’t come as a surprise that the constantly evolving and chameleonic Hardy could nail his portrayal of Reggie and Ronnie, though. Whether he’s playing a comic book henchman (The Dark Knight Rises), a confused mid-level spy (Tinker Tailor Soldier Spy), or Max Rockatansky himself (Mad Max: Fury Road), the actor has consistently demonstrated a meticulous dedication to his craft and a near-perfect ability to inhabit his characters. He’s also proven that he has a unique talent for transforming himself into infamous British villains in the past.

As Hardy told Ask Men in a feature about the film, he only had five weeks to turn himself into the criminal and bare knuckle boxer who has attacked over 20 guards and fellow prisoners and managed to take 11 hostages during his four decades in prison. “It was a race against the clock: We didn’t have any time to waste, so I started eating and my arse very quickly got very fat. For Bronson, I put on about 7lbs a week—with no steroids. In the end I’d put on about 2 and a half stone by eating chicken and rice, which was my staple diet throughout the day. Then I’d have a pizza, Häagen-Dazs and Coca-Cola: So not good stuff, but I had to put weight on. I needed to put a layer of fat on my body, because Bronson when he was younger was a big guy, a brawler. My diet was lenient as we weren’t going for the Bruce Lee look and we weren’t looking for the cut.”

In terms of conditioning, Hardy said that he had no official workout plan, preferring to do a series of non-specific exercises, including push-ups, ab work, and random resistance training with his longtime personal trainer and friend Pnut (pronounced “peanut”). “My approach was to do a lot of repetitions in order to send messages to my muscles: this helps them start to grow in a way that you can’t make them in the gym. To achieve dense muscle, you need a specific kind of training. Also, to ‘become’ Charlie Bronson I had to quickly put a lot of weight quickly on my forearms, chest and neck. By the time I’d finished, my legs looked like those of a stork in comparison to the top half of my body.”

Initially, Hardy says that the inmate was less than impressed with the actor who’d been selected to play him on their first meeting. But the actor told Bronson not to worry. “When I came back two weeks later he was thoroughly impressed with what he saw. His sister had been telling him good things about the way I'd been doing his voice and the way I moved like him, but his concern was the physicality of my portrayal of him, but I think I did a good job in the end.”

According to an entry in Bronson’s journals, published as Diaries From Hell: Charles Bronson - My Prison Diaries in 2009, Bronson was more than happy with Hardy’s results. “He has put on one and a half stone of muscles for the movie,” he writes in an entry from January 2008. “He looks awesome and I’m so fucking proud of him. You wouldn’t want to meet him down a dark alley at 3am. Tom looks more like me than I look like me.”

Bronson also praises the four banana milkshakes and four muffins that Hardy brought along with him for that visit.

A month later, he wrote about Hardy and the film once more. “A big event today: I chopped off the most infamous tash in the UK, if not Europe—maybe the world. Yeah, my moustache has gone and it’s going to end up going through Tom Hardy’s letter box. Maybe the make-up artists on set can stick it on his top lip. If not, Tom can stick it in his pocket for luck. Then at least part of me will be on the film set!”

Although the results of Hardy’s training were clearly worth it, the actor later admitted that the preparation for that role had taken its toll on him physically. “For Bronson I just ate chocolate and pizza, lifted Pnut up and down the stairs, played Xbox, shaved my head and grew a moustache,” he told Shortlist magazine in 2011. “I was a mess after Bronson. I got really fat. I was a real road crash. So Pnut had the problem of getting the rust off me.”

After that, training to play a mixed martial artist in the 2011 drama Warrior was a shock to the system, to say the least. “By the time I went to Pittsburgh to film Warrior I had two hours of boxing, two hours of muay thai, two hours of jiu jitsu, two hours of choreography and two hours of weight lifting a day, every day for eight weeks,” he said. “I don’t know how people do that every day. Bronson was fun.”

Check Out the Only Known Fight Footage of Charles Bronson