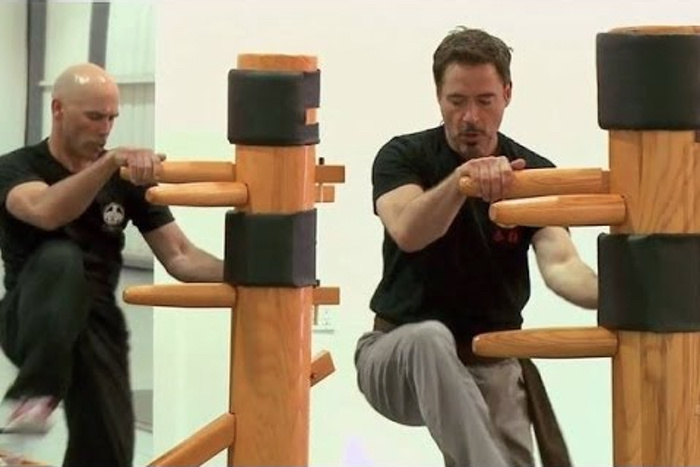 There are a myriad of ways in which martial arts can improve a person’s life. For the weekend warrior, it can be a fun new hobby, teach some cool tricks, and introduce you to new friends. For the more dedicated student, it can give you purpose, teach you discipline, help you to create a new family and maybe even lead to a new career or calling. For some people, though, taking up a martial art isn’t just a life changing experience; it’s a live saving one.

Robert Downey Jr., the beloved but troubled actor, began experimenting with drugs as a child, smoking joints with his father’s permission before he’d turned 10, and his use and choice of illicit substances descended quickly from there. He spent the better part of the next two decades struggling with addiction, racking up arrests and parole violations—and one 180 day prison sentence—as a result of his rampant drug abuse and behavior. He’d tried almost everything, including multiple attempts at rehab, when he turned to Wing Chun as his potential higher power.

Believing that the striking and grappling art, best known in Hollywood as the martial art that Bruce Lee practiced before developing Jeet Kune Do, could help to give him the routine, focus, and philosophy that could keep him on the wagon, Downey approached LA Wing Chun Academy founder Eric Oram about lessons.

Oram was dubious about the notorious actor’s commitment at first. “When he first came to me, insurance companies wouldn't bond him for movies; he couldn't get roles," Oram told Men’s Journal in 2011. "I told him if he didn't show up to a lesson, I was going to chop off his toes and feed them back to him. One day he didn't turn up, and I told him goodbye. Then he had a couple of producers call me and vouch for him, saying, 'He was with us in a meeting; he didn't have a phone. It's our fault. Don't cut his head off.' He has committed himself to it ever since and turned his life around."

A year into his training, Downey talked about the incredible change his training had made in his life during and appearance on Oprah. “Martial has just been... I can’t even say how much it’s impacted my ability to stay well and focused,” the star said on the show. “It’s a spiritual practice. It’s grounded me and its primary purpose is to promote a sense of spiritual warriordom and to respect your society and to be prepared to defend yourself and your society if necessary.”

Like any enthusiastic new convert, he tried to recruit new people to the cause while he was at it, telling Oprah that she should try it. “I think you would rock because you’re formidable,” Downey insisted.

Three years into his training, just as he was about to test for his medium blue sash, Downey discussed his continuing love for the sport on Late Show With David Letterman. “I am deeply committed to Wing Chun,” he told the host, before giddily explaining and demonstrating Bil Gee (aka as Biu Gee), the art of thrusting fingers.

When Letterman asked him if Bil Gee was the basic building block of Wing Chun, Downey somewhat guiltily admitted that there was more to it than that. “No, and I might get in trouble because if Sifu [Oram] is watching tonight, the truth is Wing Chun is meant to be a very graceful artform,” he said, adding “I need to get more into the meditative aspects.”

His Sifu obviously forgave the actor’s case of “brown belt fever,” as Downey later called in in the appearance, because the pair are still working together to this day. And sobriety isn’t the only thing that the star has gained from the experience.

“Robert’s focus is night and day from when we first began,” Oram told Men’s Fitness. “This shotgun mind of his channeled it into a single point of focus and turned it into a laser. The training demands it. During an exchange, if your brain is anywhere else, I’m gonna get ya. If the mind strays, gotcha. Stop to pat yourself on the back? Thinking about your taxes? Gotcha.”

As Downey took up more action-oriented roles, both as the title character in Guy Ritchie’s Sherlock Holmes films and Iron Man in the Marvel universe, he started to add some of his Wing Chun skills to his stunts. “Film fight choreography has its own demands,” Oram said. “It’s focus, control, timing, and lots of repetition. It’s remembering where you are every step of the way in telling a story and yet playing it as if it’s happening for the first time live. There’s an art to that, and Robert works very, very hard in that process. I’ve fight doubled for him for minor stuff, like pick-up shots, but Robert does all his own stuff when it comes to fights. When the camera’s on him, it’s really him doing it.”

That said, Downey did admit in a Deadline interview from October 2014, that he was starting to back away from that side of filmmaking as he approached fifty, and was letting the stuntmen do their jobs, instead. “Hearing the cracking of my own bones on Iron Man 3, I finally came out of what can only be described as a five year flight of fancy where I thought, if Sherlock Holmes can do this, it means I can. If Tony can jump from one part of a scaffold to the other and not bust his ankle, well then let’s do it two or three times and go to lunch. Looking back, I’m surprised and really embarrassed that some middle aged guy was thinking like that. And I honestly don’t think like that presently,” he said.

“Everybody always gets injured,” he added later in the interview. “And then it just depends on what really is your wheelhouse and what’s the tradeoff and what you are willing to do. I’m still down to doing all kinds of stuff. I think the main lesson for me was that I momentarily ceased to take the precautions that I’ve taken every other time, and obviously what caused it was a psychological point of view that I had that is just not realistic.”

And Downey is still down to continue his physical and spiritual practice with Wing Chun. He continues to stay clean as well, indulging in nothing more serious than the occasional post-practice painkiller.

When Men’s Health writer Stephen Rodrick joined him at the dojo for a May 2011 profile, Downey gave the writer the following sage advice: “Seriously, don’t worry about looking like an idiot. It’s like life: The less self-conscious you are, the better it works. And remember, lots of ice and Advil afterward. Trust me on that one.”