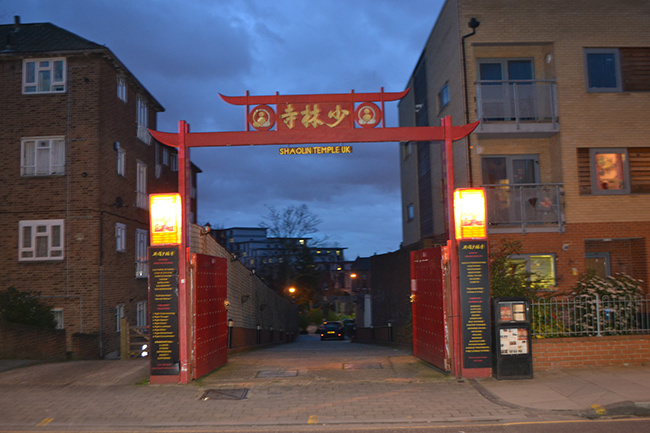 Down the backstreets of dingy Tufnell Park in North London, I found the Shaolin Temple UK guarded by plants and surrounded by traditional Oriental murals, which juxtaposed nicely with the pubs and chicken shops 100 metres down the road.

I didn’t know what to expect. Half of me thought the place might be overrun by nerdy martial arts movie buffs who knew every line from Bruce Lee’s filmography. The other half of me thought/hoped I might stumble across an authentic monastery complete with celibate Chinese devotees. I just knew I wanted to learn more about the ancient art of Shaolin kung fu and its relationship to Qi Gong meditation—a spiritual practice that teaches that the human body is a healer, a weapon, and a part of nature.

When I arrived I was greeted by Akin Akinsiky, a calm, middle-aged Londoner. After studying Muay Thai in the late 90s, Akin now dedicates all of his free time to the temple as a trainer.

Although small, the building seemed to have everything one would need a to lead a full Shaolin life: a fighting ring, training and preparation rooms, a seminar/teaching room, a food area, a sauna, even massage and acupuncture rooms. 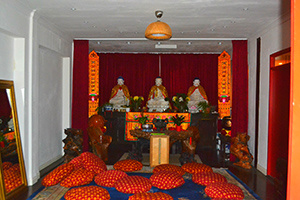 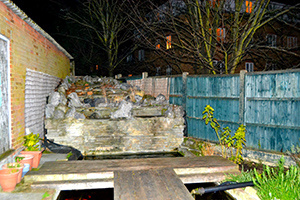 In China, children join the Shaolin temple at a very young age to begin basic training, and in London it was no different. The Shaolin Temple UK offers preparation classes for kids as young as 5. I was lucky enough to catch the end of one of these sessions--a class of three, all quietly comfortable with the moves and exercises that I would later find crippling when I attended my first class.

As in Chinese Shaolin temples, there were a selection of conditioning posts all over, both inside and out, all made of different materials, from tire to rubber-covered bamboo. It’s paramount in Shaolin Kung Fu to condition and desensitise parts of your body so that you have a high pain threshold. In the traditional monasteries this conditioning takes many forms, from water-slapping to continuously head-butting the wall. 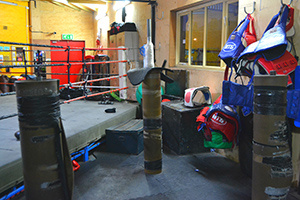 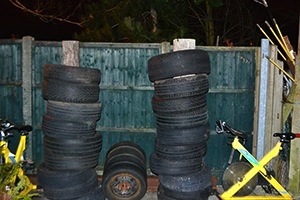 I was introduced to Milan Kapetan, a Slovenian Buddhist Shaolin who speaks fluent Mandarin, has lived in China, and would be running my Qi Gong meditation class later in the evening. I asked him what made Shaolin Kung Fu and the temple different from other forms of martial arts and other gyms.

“It’s a holistic approach,” he said. “It’s the body and mind together. People can choose but the best way is to choose everything!” Akin then added, “Here there’s more longevity, it’s more wholesome, you can do the internal stuff, the external stuff, the fighting, there’s even calligraphy.”

It was time for my meditation session; Qi Gong is the practice of “energy cultivation,” a mixture of breathing, movement, healing, awareness, and meditation. The session I attended was a bizarre experience. It was very soothing for my mind (most of the time passed in silence) but the physical side of it was unexpectedly intense. There was a lot of extreme stretching in ways that I figured were only known to contortionists; all the while we were expected to maintain a peaceful mind and slow, deep breathing. 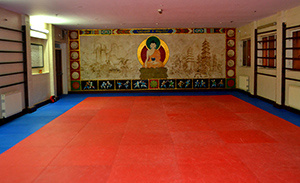 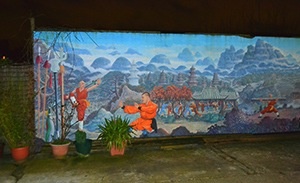 We rounded off the class with body conditioning. Armed with long metal brushes, the students repeatedly hit themselves hypnotically, gradually moving around their bodies (not excluding faces and feet) and increasing the force they applied. I didn’t have a metal conditioning brush so I was instructed to slap myself over and over, which I did. At one point, when I had been slapping myself square in the face for over a minute, I almost felt like this had to be a prank the others had decided to play on the new guy. However there were no giggles coming from the other students, only gasps and grunts, so I think it was legit.

This endless quest to craft the body into an indestructible machine goes all the way back to the origins of Shaolin Kung Fu, in the sixth century. The original Shaolin Monastery on Mount Song in the Henan Province in central China was renowned for its location and wealth and was therefore under constant bombardment from enemies and bandits trying to take it over. The Shaolin monks developed a style of fighting based of exercises they’d inherited from their founder and master, Tat Moh, an Indian monk who developed the techniques of the Shaolin Arts after meditating in solitude for nine years.

The preparation class I attended included exercises and fighting techniques I was more familiar with, and the class was a pretty even mix of male and female students, of students there for fitness and real fighters. After an hour of jogging, kicking, punching, and floor exercises, I had inched towards delirium and my body had begun to pang and cramp up. 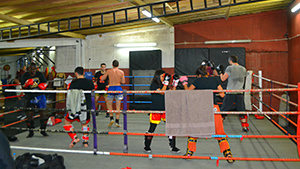 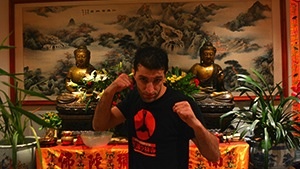 After class I sat with Markus Tamoev, a regular competitor who fights in K-1 and Thai boxing bouts. I asked him about his training. “We learn Sin Soo here, which is a different character to other martial arts,” he told me. “It’s not ring fighting and it has certain rules. So it’s good to learn this to broaden my skills and use what I learn here in other martial arts like K-1 and Thai boxing. ”

Like many others at the temple, Markus said it would be impossible for him to separate the physical act of Shaolin Kung Fu from its spiritual foundations. “Buddhism builds up in you when you start training,” he said. “You start to ask questions and understand how you can apply Buddhism in a fight. You start to respect the Shaolin spirit. Spiritually I feel that the Shaolin is for me.”

I didn’t come to the Shaolin Temple UK in search of a spiritual epiphany, but I can understand how an interest in Buddhism could be ignited and nurtured there. Shaolin Kung Fu in China is known as “meditation in motion,” so even during moments of extreme physical stress and confrontation, many practitioners claim to be in a state of meditation. Which seems like a pleasant way to handle a fight.

This Is Spardha: Ancient Monastic Wrestling and the Rise of Indian MMA