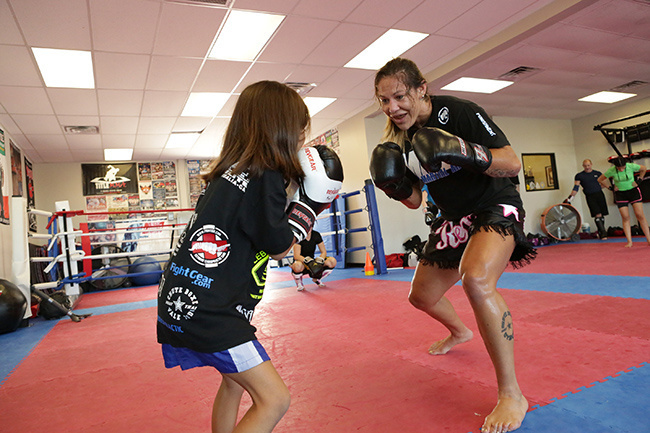 I pull into the parking lot at Cooper MMA / Jiu Jitsu in Austin, Texas, about half an hour early. The building looks empty, so I sit in my car and wonder why I ever thought I could hang with any group of people taking a Muay Thai seminar with Cris “Cyborg.” This isn’t my gym. I don’t know if I should be here.

In my rearview mirror I see a group of people get out of a car and pull shin guards and gloves out of their trunk. I guess it’s okay to go in. I step out of my car.

I get back in the car.

Cyborg is possibly the most dangerous woman in MMA, with a fitting nickname. When she fights she's relentless and brutal, something more than human, moving faster and punching harder than you can believe. She is freaking scary. And I'm a little terrified.

More people show up. I suck it up and go in.

Cyborg is just inside the door with the two people she came with— her ex-brother-in-law Cyborguinho Dos Santos and his girlfriend. They are sitting quietly in a tiny entryway, looking out over the empty gym. Cyborg says hi. I say hi, take off my shoes, and send a text: “Cyborg just said hi to me omg.”

Okay, I’m done acting silly. I go around and talk to the other women who are there for the first half of the seminar, which will be for women only. A few are amateur fighters, but one says she just started taking martial arts three weeks ago. One has done only jiu-jitsu, and the rest seem to be enthusiastic practitioners like me who will never step into a cage for real. I’ll be fine.

Cyborg tells us to run around the room; we do not argue. She leads us some warmups; I do the best goddamn bicycle crunches I have ever done.

She demonstrates the first combination she wants us to work on, and I realize something: Cyborg is shy. She’s not sure of her English. She works hard to communicate what we should do and then watches our faces closely to see that we understand before she sets us loose to try it. She speaks quietly.

Not everything. She's still terrifying. But now she’s struggling for the right words. Which makes her human. I know how to act around humans.

For one demo, she catches Cyborguinho’s round kick with one arm, elbows his quad with the other, and then switches grips and spins to deliver a back elbow with the first arm. We watch as she does it again and then try it ourselves. It’s the best. 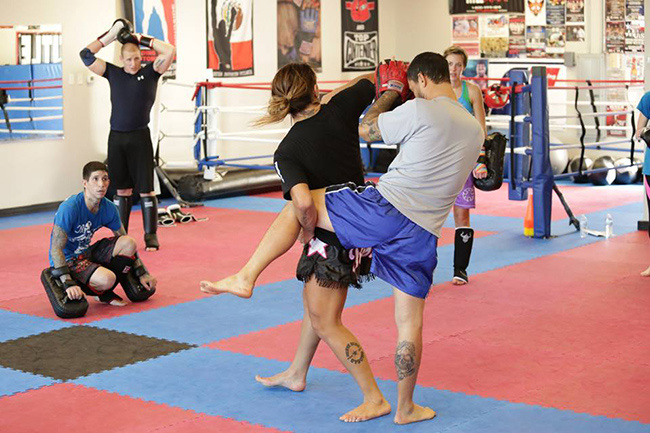 We all gasp when she says it’s time to spar and that she will spar with each of us. Sparring with Cris "Cyborg." I move around with my first two partners so that I get close enough to Cyborg to grab her for the third round.

I’ve gone from being scared to stand in the same parking lot with the best female mixed martial artist in the world to gleefully jumping right into her reach. This could be because I trust now that she’s there to help us, not destroy us, but it could also be because I always tend to get a little reckless after a few rounds of sparring. 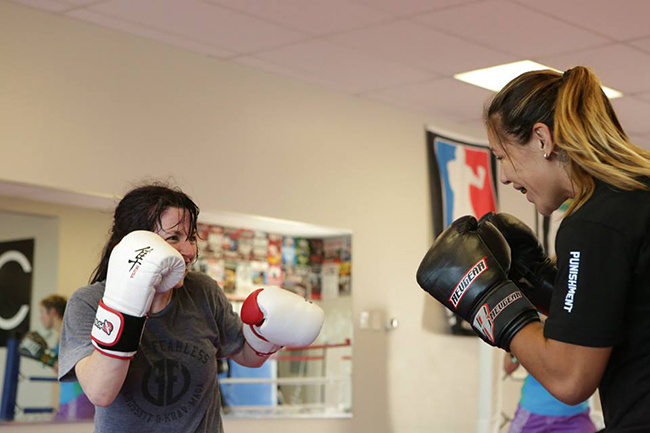 Cyborg and I bump gloves. She punches and then knees me. I try to kick; she punches me again. I try to punch her; she fends off my strikes easily and kicks me in the ribs a few times. She’s moving as slowly as she can, hitting softly, and deliberately leaving herself open a few times.

I aim a straight right and it gets through and nails her in the nose. I freeze. She’s between me and the door. There’s no point in trying to get away.

But Cyborg just smiles and kicks me gently. She lets me live.

Cyborg caps the sparring off with a round against a little girl, and we all stop to watch. She tells me later, “I have a big responsibility all the time when I fight because I’m representing me, my gym, and all the girls.” She is good with the kid. She tells me about a program she works with in Brazil that feeds low-income kids and uses MMA to encourage them to avoid drugs. 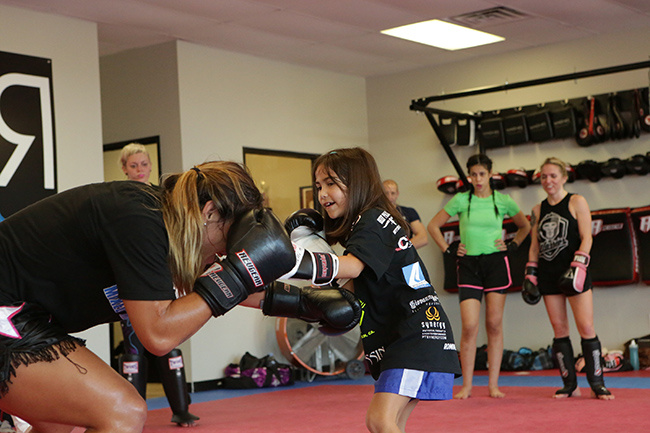 When we’re done sparring, people bring out their phones and try to still their adrenaline-shaky hands enough to get pictures with Cyborg. She poses, signs gloves and anything else people hand her, and smiles at all of us. She has pretty eyes. She tells us she is proud of us for fighting.

For the second half of the seminar, men join in. This time, Cyborg asks us to do the combos in unison. “I want you to make a song,” she says. We do our best.

She shows us a combination that ends with, as she says, “step and ... move your body.”

We are now all in love with her. We step and pivot as hard as we can.

I Ate Lunch With Dominick Cruz