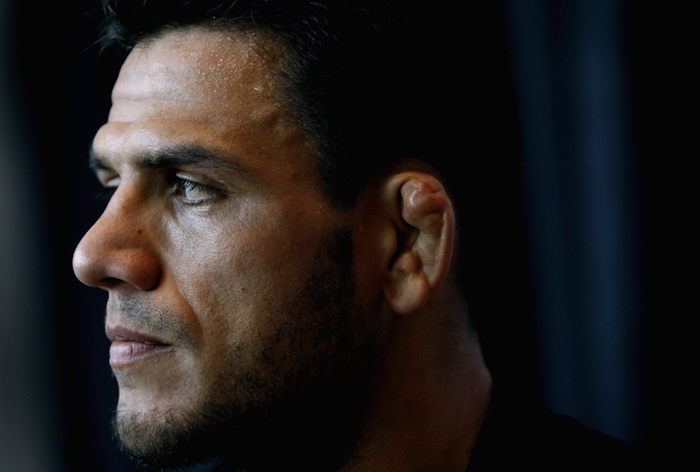 Calling an injured athlete a coward is a peculiar privilege. It's part of the chasm between athletes and fans. Of course we doubt them. Of course we call them cowards and worse. After all, there's a screen, some electronics, and much distance separating our experiences from theirs.

Chances are you already know that UFC 196's original headliner between featherweight champion Conor McGregor and lightweight champion Rafael dos Anjos is off. Instead, Nate Diaz—a perennial contender at fluctu-weight and one of McGregor's most vocal antagonists—steps into the great big hole in the card's top spot at 170 pounds, a satisfying substitute even if it lacks the historic stakes of one champion moving up a division to face another. That switch comes because of an injury to dos Anjos: his coach, Rafael Cordeiro, told MMA Fighting that the champion fractured his foot after kicking a sparring partner in the knee last week. On Tuesday night, dos Anjos shared an image of his left foot swollen like a turnip. 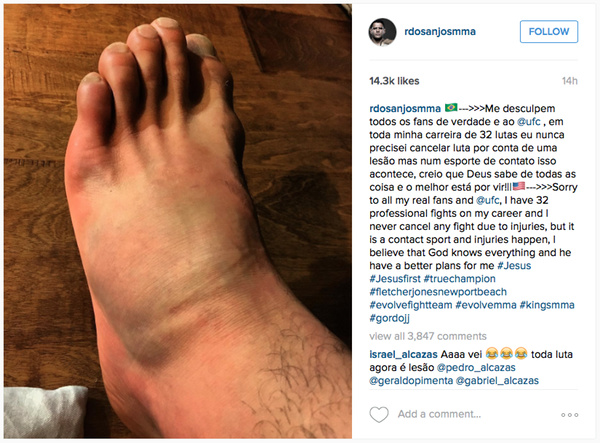 The fallout from dos Anjos's withdrawal continues a tradition as predictable as it is stupid: accusations that a fighter who's hurt is really just faking his injuries out of fear.

Look at dos Anjos's Instagram picture that precedes the purple appendage, in which a presumably healthy champion preps for the sparring session during which the foot-to-knee mishap occurred. As he stayed silent on social media during the search for his replacement, the comments underneath that image became a verbal sewer coursing with the kind of shit you could only say to people without ever meeting them. And hey, generating impulsive, ill-informed, obscene bickering is pretty much the sole purpose of Internet comment sections in 2016.

But the idiotic charges that dos Anjos is ducking McGregor and that his injury is just a cover aren't only unfounded: they ignore what a professional fighter—in this case a champion—does for a living. Dos Anjos has been beating people up in exchange for money for 12 years, and at the moment, he is better at beating people up for money than anyone else at 155 pounds. To get that good, injuries along the way are inevitable. They're frustrating, for us and for the fighters. If you've spent time in a fight gym, you know the lengths to which fighters will go to work around their pain, keep it secret, and make it to their fight night paycheck. Injuries might be symptoms of poorly designed training regimens, but not cowardice. In reaching the top of the lightweight heap, dos Anjos surely learned to deal with the anxiety at the prospect of personal harm a long time ago. But since stoic silence is a poor defense, he did what every other fighter does: provide photographic evidence and hope the dumbest, loudest voices go quiet.

Maybe calling dos Anjos scared is just a poorly considered way to express disappointment. McGregor-dos Anjos falling apart less than two weeks out is a bummer, and the easiest guy to blame is the one whose health status changed because of his own mistake. And while dos Anjos has a basically clean track record (until now) of showing up on fight night as planned, it's not like fighters have never sat out with less-than-compromising injuries—in the final days of Strikeforce as the promotion was being rolled into the UFC, its idle champions were rumored to be doing exactly that when they turned down fights. Last month, Fabricio Werdum, heavyweight champion and a dos Anjos teammate, provoked suspicion by announcing he was suffering fight-delaying injuries on the eve of a proposed match-up against short-notice opponent Stipe Miocic. (That fight is now expected to headline UFC 198.) And, of course, last summer there was the bellowing chorus—including the UFC brass—who said Jose Aldo's rib wasn’t badly hurt, despite being presented with medical imaging testifying to the damage.

No matter how many pictures of X-rays or mangled body parts meet our eyes, we'll never truly know how any other person feels. And that's one of the weirdest aspects of being a typical MMA fan: we bear witness to a physical toll we'll probably never endure, but there's always room for doubt. That punch wouldn’t have knocked us out because we can't feel it. If that were us in there, we'd go unconscious rather than tap out. We can't be hurt, and that makes it so hard to conceive of it happening to anyone else.

Rafael Dos Anjos Is out of UFC 196 With Broken Foot. What Happens Now?