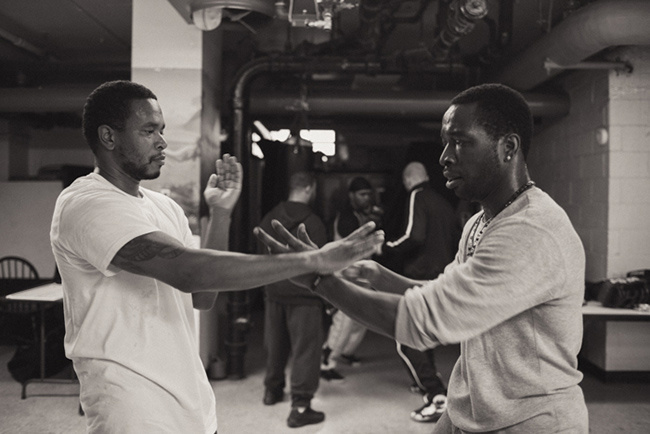 The Jeet Kune Do master of East Harlem hadn’t seen his father since he was a kid, but a few years ago the old man returned to New York to explain himself.

“You know that song ‘Papa Was a Rolling Stone?’” Dawadah King David asks when he tells the story. “That was like my dad.”

Dawadah, his mother, and his two sisters managed on their own. He discovered and fell in love with boxing, especially the way Sugar Ray Leonard flashed across the ring. He learned to throw a jab.

Dad had grown up a musician. With his family’s blessing he’d taken drum lessons and was out of patience for more instruction when he realized he didn’t know anything about raising a family. More than anything, he wanted to be a percussionist. He did well enough that if you’re the right age, you might have heard the warm bloom of his snare in a Budweiser commercial. When he got back to David he was old and he was sick, and died shortly after.

Dawadah understands why things happened the way they did.

“His family spent a lot of money on those drum lessons, man,” David says.

It's Monday night, which means David is training in the community room of the Woodrow Wilson Houses, a 20-story housing project on E. 105th Street. It’s the kind of place that shows up in the tabloids often enough for New Yorkers to have heard its name but not often enough that anyone would remember it beyond maybe a dim association with trouble.

There was Aaron Kobe Collins, who was 28 at the time of his death. In December 2011, police found his body in burned-out stairwell, a single bullet in his chest. Carter was the 14th homicide in East Harlem that year. More recently, an 80-year-old resident was in critical condition at Harlem Hospital after his legs were caught in the building’s elevator and crushed between the first and second floors. After that, tenants threatened to sue the New York City Housing Authority, which responded by promising investigations and repairs.

Dawadah has never had a gym, but he has a heavy bag and a wooden training dummy stored in the community room’s closet.  For 10 dollars a class, he’ll train anyone with an interest in Jeet Kune Do, the hybrid martial arts system developed by Bruce Lee. But tonight’s tenant meeting is running late, and none of his pupils have arrived anyway, so he waits, looking out the building’s glass doors and catching up with whoever passes through. The lobby floor is flecked with spent cigarette butts, and there’s hardly a person Dawadah talks to he doesn’t bum a Pall Mall to from the creased pack in the jacket pocket of his red tracksuit.

Dawadah has made his living as a nurse for the last 22 years. If he belongs to any special martial arts clubs or gyms or has ever been awarded a belt of any color he keeps it to himself. He first started to learn Jeet Kune Do when he moved out of his mother’s apartment at the age of 16 and discovered a wooden practice dummy in his new roommate’s living room. He collected mentors and if their advice held he passed it along.

In the right crowd, Bruce Lee’s words mean as much as Moses’ did in the desert, and “Be Like Water” may as well be the First Commandment. Lee wanted his pupils formless, adaptable to circumstances. In the community room at the Wilson Houses, Dawadah’s students adapt as best they can to what they have. They take turns working the heavy bag or throwing combinations at a shared set of mitts. They measure their footwork by the length of the tiles on the floor.

They had to clear the room before they started, moving around folded, stacked steel chairs and cheap office tables. Baseball caps hang on the wall commemorating things no one would pay to cheer for, like the last U.S. Census. There’s an “Out of Order” sign on the bathroom door that meeting attendees said should be ignored.

Dawadah usually attracts no more than five students to a session, but no matter who else shows up 30-year-old Mike Brown is the star pupil. Brown is now lying on the floor, eyes shut, knees pulled tight to his chest, imagining all the ways his next fight could end.

He pictures himself intercepting a kick with his own foot then snapping back a counter before his heel finds the mat. He can feel the capillaries under his knuckles hemorrhage, his opponent’s hand slapping the canvas desperate for Brown to let him breathe again. He can feel the ref taking his fist in hand and swinging their arms to the sky.

Brown opens his eyes but stays on the floor, practicing the defense he expects to need if he finds himself on his back. “If you try to get at me this way, I got the counter,” he says, and swats at the air. He rocks forward onto the small of his back, pops his knees out, and slaps the soles of his shoes to the tile floor as he stands.

Dawadah sits on the edge of the only office table left unfolded, watching. His arms are crossed across his chest, covering the writing on his short: Dawadah’s Total Complete JKD. Next to him is Sean Davis, a student who enjoys the workout but has no intention of repping the floating school in a real fight.

“Yeah, but you still got to be ready for those wild shots,” Dawadah cautions Brown. “They can come at you with that Superman shit.” He strikes a comic book pose with one arm frozen in mid-arc over his head, mouth open so big he could fit his fist inside. He lets only the striking arm loose from the pose, dangling it like it’s become unhinged for a moment before the rest of his body follows along and shakes it off.

“I’m ready for that shit, too,” Brown says. “I almost want that to happen.”

“That’s why Frazier gave Ali so much trouble,” Davis says. He does a "Smoking Joe" impression, hunching over with fists pressed against his head, tossing elbows side-to-side and grunting. “Guys with no technique will come at you with angles you’d never think of.”

Jeet Kune Do isn’t a discipline being taught at many MMA gyms these days, and Lee’s philosophy sometimes seems more useful to fight academics interested in the evolution of style than to the person who’s actually in a fight. Despite having fallen out of fashion, however, Jeet Kune Do has helped Mike Brown notch more wins than losses at martial arts tournaments and amateur MMA fights.

“I don’t think other fighters know what to think of me,” Brown says. “If I tell them the style, I get a lot of uncertain responses.”

If Brown can make himself into the perfect athlete that he has in his head it will mean he has practiced the textbook rhythms of a roundhouse kick or a straight lead so well that he’ll never have to think about them again. He will have mastered form so he can refute it. He has contempt for anyone who might win a match in spite of the laziness or vanity he sees in a muddied form.

“The thing is those crazy, wild haymakers you see people throwing,” Brown says. “Guys with no defense, no technicality. Like it’s a street fight. What it’s supposed to be is guys who actually have some skill in something. Guys acquiring everything you need to be a complete fighter, standing their ground. Otherwise you might as well be in the streets.”

As long as professional mixed martial arts is against New York state law and nobody is worried about registering for a license, there’s really no way to tell how many fighters there are out there practicing choke holds in their building’s laundry room. Gyms are one thing, but people who actually want to see how well they can manage sharing 22-square-feet of ring canvas with a person who actually means to hurt them is another. For years, the only real barometer to measure this has been the Underground Combat League, the city’s oldest amateur, and intermittently legal, MMA promotion.

One week after their training session at Woodrow Wilson Houses, Mike Brown is due in a UCL ring. His record at the promotion is 2-0, but the man he’ll fight, Jerome Mickle, is a rising underground MMA star with a 6-0 record, and he’s training with the Underground Combat League’s founder and owner, Peter Storm.

Storm is described as being a heartbeat away from folk hero. And the atria are squeezing. Stories get around. One person thinks Storm is likely training Mickle in the attic of an abandoned house they’re squatting in. Another mentions ominous and unverifiable things about his arrest record.

There is one thing absolutely certain about Storm: For 10 years he has kept the UCL alive in New York with little help, offering a place for fighters to test themselves and be seen.

What will always generate more rumors than Storm is the possibility of New York finally joining the rest of the Union and making MMA legal. In the spring, 2013 seemed like a good bet. A bill had been introduced, there was money to be made, and the sport’s biggest enemy in state politics had left his seat. The question wasn’t “if” but “when.”

Sanctioning wouldn’t happen in 2013, as it turns out. But when it does happen, the logic goes that Storm is positioned best to profit off the legitimacy and in turn get fighters in front of the right set of eyes.

“He’s got connections,” Dawadah says. “I researched this man. That’s how we do it. When it’s legalized and Storm blows up, we blow up.”

The prospect that legitimacy will allow for better competition only makes Dawadah like the idea even more. Who knows what promotions will rise up to battle for supremacy in New York, who they might be connected to, or how they’ll treat their fighters? Once the law is signed, they can only rise.

“That’s the American way,” Dawadah says. “And if my way be better than your way, that’s how it’s gonna be. You sell rice? I’m gonna sell rice and cookies. Be on your game.”

Creeping Toward the Overground

The Fighting Life of Kaream Ellington