In the Racket: The Mystery of Danaher 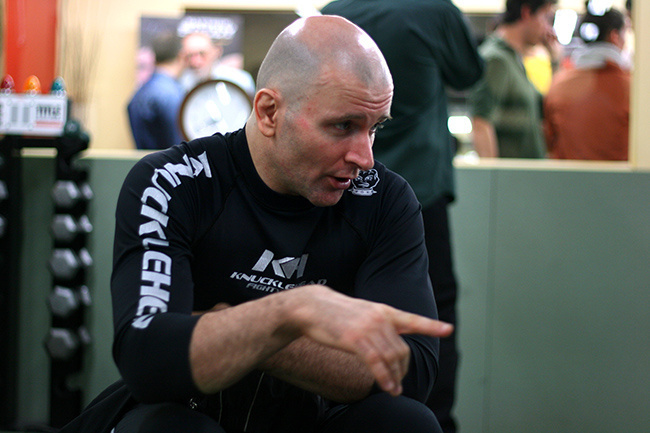 Sometime around the second fight between Georges St-Pierre and Matt Serra, amidst all the ballyhoo and reckoning, you might recall that a genius began to emerge. John Danaher was intertwined in the behind-the-scenes drama, and via some timely video blogs later on and Serra’s endorsement of Danaher as the “genius” behind his first camp, that genius was thrust into the open public.

That was five years ago. Today Danaher has gone on to become a sort of Socratic figure in MMA, who uses Brazilian jiu-jitsu as his philosophical medium. The New Zealander, who came to prominence with Georges St-Pierre and is now helping Chris Weidman prepare for UFC middleweight champion Anderson Silva on July 6, is always in a state of figuring. If you’ve met him, you know—his eyes look right through the thing in front of him. They’re never fixed entirely on the rolling partner. Never seeing anything specifically, but seeing things as a whole. Seeing things unfold inwardly in a drawn-out, contemplative quiet.

He is, in essence, a sort of modern-day sage.

When I saw him giving one-on-one training to fellow Ivy Leaguer John Cholish at Renzo Gracie’s Academy in Manhattan one day last year, he would demonstrate a move then fall silent for a few moments and into active introspection. He’d stand up with his arms akimbo and then scratch his chin, playing out a reverie. Then he would demonstrate a “what about this” sort of addendum—in an unnervingly even voice—to the thing he was just working on.

“You can’t quite put John Danaher into words,” Cholish said that day. “It’s cool because he actually went to Columbia University and got a Ph.D. from there. There are a lot of times we’ll sit for a couple of hours just talking about the game. He’s one of the few guys will give me homework: ‘Go home and watch this and work on this.’”

Danaher’s black belt came from Renzo Gracie, and one of the instructors at Gracie’s was Matt Serra. St-Pierre was also training at Gracie’s. So by the time St-Pierre and Serra fought the first time back in 2007, the thing was already getting a little incestuous and divisive and, even still, never entirely unfriendly. Things did get territorial by the second fight, however, and in Manhattan people started busting each other’s balls.

Serra's coach Ray Longo, who has worked with Serra for nearly 20 years, recalls: “When Matt fought GSP the first time, he threw Georges out of Renzo’s because he was fighting him. And the first thought was, Matt is Danaher’s instructor. But, Matt is a strong personality, and they kicked GSP out of Renzo’s, which was met with some small resistance. Georges has to leave, and Matt beats him. They let Georges back in, and for the second fight, I think, Matt put Danaher on the map with all the video blogs, saying ‘This is the genius that helps me.’ And then Georges beats him, and Danaher’s since been with Georges, so he starts getting the notoriety.”

Now they are all friends. In Longo’s gym office, there’s a picture of himself, looking bewitched as usual, standing next to Georges St-Pierre. Only, under St-Pierre’s smiling face, somebody mistakenly put the label “Matt Serra.” Longo wasn’t about to change it. It’s too funny the way it is—too emblematic of the everyday folly going on around there. There’s also a famous story about Danaher showing up to Serra’s wedding wearing his rashguard. The thought back then remains exactly how it is now with Danaher: Is this guy serious?

Is he serious? Yes. Always. Except when he’s not. And even then his non-seriousness has mysterious origins that, you get the feeling, can be traced back to seriousness.

“He’s an interesting guy,” Longo says. “Sometimes when we talk I’ve got to filter it out—the accent and the low tone, and I’m thinking, Is that making him sound smart, or is he really smart? Because he’ll fuck with you, too. He’s funny. One thing Danaher is, is a free thinker.

“Now we’re all friends now, of course. I feel like I’m a close friend of Georges’. And you know what, he’s still fearful of Matt. Matt’s like a street guy. We were at a club in Montreal, and I was talking to some drug dealer, and I told him to take a fucking walk, and Georges said [Here Longo attempts GSP’s French-Canadian accent], ‘Oh my god, I can’t believe the way you handled that.’ So now Georges … he thinks I’m somebody I’m not.”

In looks alone, Longo could pass as a mob boss, and it’s one of the reasons that Dana White keeps saying he wants to start a sitcom about Serra and Longo’s daily lives on Long Island. And what a back-story that would have:

At the perch is Renzo Gracie. Then there’s Longo, who first took in Serra when Serra was a teenage jiu-jitsu prodigy, and has since become a coach, mentor, and friend. “These days Matt gives me advice,” Longo says. In between, lots of laughs. Upsets. History. Championship belts exchanging hands. Redemption. Danaher, who stood in neither man’s corner, was in the thick of it all. He was Serra’s pupil, but in later years it was Serra going to Danaher for guidance. Today he is more associated with St-Pierre, the UFC’s long-tenured welterweight champion.

He’s the “genius” behind the curtain.

“Thing is, he’s a true student of the game,” Longo says. They all are. That’s what makes the game’s masters interchangeable, starting with the acknowledgement that there are no masters ...

Check out the first installment of "In the Racket":