In the Wake of Karolina: Women's Strawweight Gets Interesting 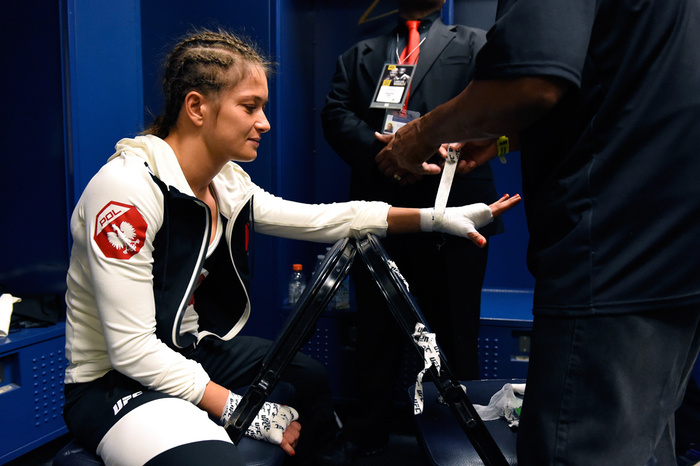 Ronda Rousey, Dana White’s unapologetic thirst for “needle-movers,” and matchmaking that takes storylines and crossover appeal into account are all, at best, polarizing elements in the greater UFC picture. But, for one brief moment in 2013, those pieces came together, Voltron-style to pull off a work a seemingly unsurmountable feat: they launched a division that almost immediately attracted the attention of everyone from the most invested, long-term women’s MMA fans to the completely uninitiated.

Like most moments of genius, though, it was unsustainable. Treating Rousey as a tentpole of sorts for the Bantamweight division—and, arguably, the very concept for women in the UFC—gave the outside world an intriguing narrative and main character through which to get to know the sport, but her star power and Octagonal dominance prevented all but the most dedicated fans from getting to know anyone else in the division as a fighter or a personality. Excellent martial artists like Miesha Tate and Cat Zingano—neither of whom have a deficit of skill or fascinating back stories—were treated as little more than foot notes and cannon fodder. Which worked as long as Rousey was on top, but left the division in the kind of disarray not seen in pop culture since Troy Barnes went to get the pizza in the Community episode “Remedial Chaos Theory” upon her infamous departure.

While all of the women who have claimed the Bantamweight belt in Rousey’s absence have been worthy champions who have earned their title through hard word, dedication, and impressive displays of technique and strategy, the turnover rate at the top of that division—and the dizzying transitive property equations that it inspires—is making even the most invested followers of the sport wonder if too many upsets is just as bad as none.

With no such tentpole around which to construct itself, the UFC’s second women’s division enjoyed a far more grass roots star-making machine. A collection of interesting fighters and personalities were gradually introduced to the world through the 20th season of The Ultimate Fighter, while other promising contenders like Claudia Gadelha and Joanna Jędrzejczyk made their first impressions in the Octagon. Paige VanZant, who was too young to appear on TUF, and who possessed a potential Rousey-lite combination of talent and charisma, was added to the mix as a potential needle-mover. From there, the Strawweights began to grow together, to a certain extent. They may not have captured imaginations in the same way that The Ronda Rousey Show did initially, but the subtle, slow burn allowed almost everyone involve to develop as a fighter and personality in their own right.

Interestingly enough, the free hand of women’s Strawweight development quickly settled into a far more stable arrangement. Joanna Jędrzejczyk dubbed herself “Joanna Champion,” a clever move that allowed English-speaking audiences to skip any struggles with pronouncing her surname while forcing them to associate her with greatness, offered inaugural champ Carla “The Cookie Monster” Esparza an expired cookie, quoted Nick Diaz on Instagram, and then definitely handed Esparza’s reign its own best before date on March 14, 2015. She’s ruled over the division ever since, expertly fending off three strong challengers and becoming one of the UFC’s most reliable and long-standing current champs in the process.

Underneath her, the young division has been going through almost as many growing pains as its slightly elder sister. VanZant who was subtly being pushed as the heir apparent to Rousey’s breakthrough throne—a move that did neither her nor any of her contemporaries any favors—was systematically picked apart by the new and very much improved Rose Namajunas in a show-stealing fight last December that seemed to signal the beginning of Thug Rose’s climb to another shot at the title. In what was arguably yet another upset, though, that journey was definitely ended on Saturday night when the division’s other Polish powerhouse, Karolina Kowalkiewicz defeated her via unanimous decision at UFC 201.

With a dominant but not invincible champion at the top and a series of intriguing competitors fight amongst themselves for a shot at her throne, though, the Strawweight division’s chaos inspires little of the ambivalence that now faces the shakeups at Bantamweight. It might even inspire more investment, as each promising new contender brings their own unique twist to the division’s overarching story, almost as if Joanna Champion is the star of a super hero movie franchise, and her opponents are all the villains who almost vanquish her, each one more threatening than the last.

Kowalkiewicz emerging as the most obvious #1 contender definitely provides some fascinating fodder for the division’s next chapter. She doesn’t just hail from the same country as Jędrzejczyk, she comes from the same MMA origins. In fact, they faced each other as amateurs back in 2012. Jędrzejczyk won that bout via rear naked choke in the first round, but a lot has changed in the past four and a half years, and a match between the two at the height of their professional powers could be a very different beast. Physically and mentally, the similarities between the two are striking. Both are undefeated as pros. Both have a slyly casual way of verbally needling their prey. Kowalkiewicz has already thrown a Joanna-esque gauntlet, suggest that the Champion is “scared” to fight her again.

In terms of capturing both dollars and minds, you couldn’t ask for a better fight. Polish star vs Polish star is a dream fight for a promotion with interests in expanding their European market, and the buildup could easily rival the plots of many actions and martial arts films, almost as if the only hope for toppling a defiant queen is an equally dominant challenger from her home planet. And, no matter what happens between those two, the next women to emerge from the Thunderdome beneath them will bring her own story to the chapter after that.

Much like truth is stranger than fiction, a division without any pre-packaged heroes can sometimes provide more captivating plots than any McGregor hissyfit or suggested Rousey return could ever stir up.

Fixing the ‘Face’ of Women’s MMA in the Bantamweight Division