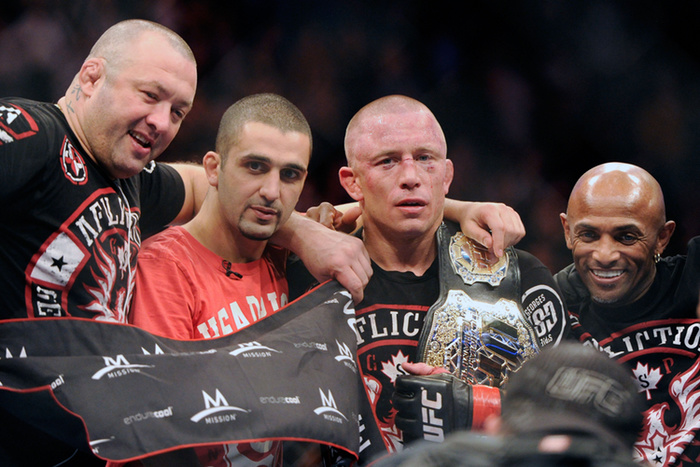 The ink is barely dry on the contract signaling the return of longtime UFC welterweight champion Georges St-Pierre, and speculation about whom he should face in his first bout after a more-than-three-year hiatus runs wild and across weight classes. Middleweight champion Michael Bisping is lobbying hard for a shot at the Montrealer. Other names floating in the ether include Anderson Silva, Conor McGregor, and Nick and Nate Diaz. It's all in line with the second-act career trajectory St-Pierre outlined for Ariel Helwani last spring: "Yes the belt means a lot…But I want to fight the best, the biggest name."

In my selfish opinion, however, there's only one way for arguably the greatest mixed martial artist of all time to return: to head back to the division he abandoned in November 2013 and try to recapture its title.

Superfights are fun, shiny things that we can't help but swiping our credit cards for, and the prospect of a million-dollar payday spurred an injured Bisping to call out St-Pierre even before he announced his UFC return. But it's strange how often we the spectators end up thinking about the merits of fights in terms of the revenue they'll generate. We aren't the UFC's financial advisors: we should want to watch fights for their potential to interest or excite or educate.

And beyond a heap of money made for other people, what's on the other side of a superfight? Take St-Pierre's 2009 cross-divisional bout with then-lightweight champion BJ Penn: for all the intrigue and publicity ahead of time, we learned almost nothing from seeing St-Pierre beat Penn badly and decisively except that the bigger fighter with the better game plan beats the smaller fighter. In the aftermath, BJ Penn's success at 155-pounds—his natural weight class—underscored what a hollow lesson that was. What would we glean from seeing St-Pierre fight an un-established champion in Bisping, an aging and beatable Silva, or an undersized McGregor? Something, but not as much as the build-up would suggest.

The more interesting questions come from measuring a fighter against the rest of his or her division. It's easy to forget that was how the subdued St-Pierre made his name in the first place: he beat the shit out of everyone to earn the title, then knocked off each available challenger, who also had to endure similar trials just to earn that privilege. That's why you can't poke holes in his résumé the way you can Fedor Emelianenko, who alternated credible opponents with freak-show fights, or Anderson Silva, whose peak talent was light years beyond an often-mediocre division. The best fighting the best at a given weight was once standard operating procedure, and in that environment, St-Pierre flourished: the Penn fight emerged when St-Pierre made beating his similar-sized peers look routine.

As St-Pierre comes back from hiatus, don't we have questions? How would St-Pierre deal with Woodley's hands and wrestling or Thompson's kicks and creativity? More importantly, how would the mid-30s version of one of the best MMA fighters of all time compare to what's on the archival footage, same weight and everything?

And if we are playing the UFC's financial advisor, remember that the promotion's bigger and more immediate issue is sustaining interest in a brand driven by personalities while Ronda Rousey, McGregor, and Jon Jones are sidelined or possibly retired. Dana White called St-Pierre "the king of pay-per-view," largely because he carried so many events on the strength of his name alone. Best to use that name to fill dead space in the calendar, and his presence opposite Woodley or Thompson would do a lot to raise the low profile of whoever emerges as champion next weekend.

But on Monday, St-Pierre's longtime coach Firas Zahabi was lukewarm about the idea of fighting Woodley, and he essentially ruled out fighting Thompson because he was a former training partner. Instead, offered excitement at the prospect of fighting Bisping or McGregor, calling them "really, really intriguing fights." Chances are St-Pierre is satisfied with his legacy and wants to harness the UFC's post-WME-IMG willingness to book fights in the spirit of drawing a crowd above all else. It's just too bad that, in this brave new world, divisional supremacy is an afterthought: apparently, being the best isn't enough to hold an audience in the palm of your hand.

Georges St-Pierre Should Be Returning to the UFC Soon