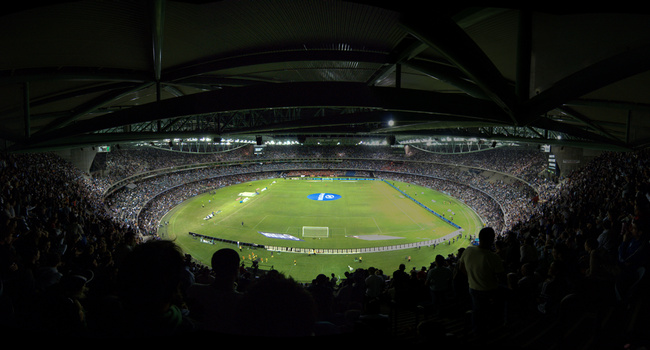 A couple of weeks ago, the UFC announced that Alexander Gustafsson would face Anthony Johnson on his home turf, in Stockholm, Sweden. The event is slated to take place at the Tele2 Arena, which fills to a whopping 30,000 spectators. The Stockholm event will make history as the largest show the UFC has ever produced in Europe, and the second largest in the history of the promotion, second to Toronto’s UFC 129 in 2011, an event that Lorenzo Fertitta called at the time the UFC’s own Super Bowl.

UFC 129 was the sixth event the UFC hosted in Canada, but it was the first mixed martial arts event to be held in Ontario since the province legalized the sport in August of 2010. Tickets sold out on February 12, and on April 30, the Rogers Centre in Toronto hosted 55,724 fans. The gate at the event was over 12 million dollars. Georges St-Pierre successfully defended his title versus Jake Shields, José Aldo beat Mark Hominick in the Fight of the Night, and Lyoto Machida received Knockout of the Night in his win over Randy Couture.

Last month, Fabricio Werdum won the interim heavyweight championship in spectacular fashion against the New Zealander Mark Hunt, after Cain Velásquez withdrew from the original plan due to injury. UFC Mexico sold out all 21,000 tickets in eight hours. It’s become clear that bringing UFC events abroad has been a successful venture, and in their Time Is Now conference, the UFC announced that there will be several more in the future. 2015 will see 45 events, with seven of those taking place in Brazil, while five new countries will see their UFC debut: Korea, Poland, Russia and Switzerland will all see the very first UFC card on their soil. Other countries that’ll get fights at home are repeat-countries China, Germany, the United Arab Emirates, Japan, Canada, and Australia.

Australia has been host to six UFC events—one in Brisbane, one in the Gold Coast, and four in Sydney. Recently, Australia saw Luke Rockhold take down Michael Bisping on Fight Night in Sydney—widely regarded as the best night of mixed martial arts of the year—which had a modest attendance of almost 10,000 people, about half the capacity of the Allphones Arena. Now, Australia may get an event large enough to rival that legendary Toronto night, if it doesn't altogether beat it.

The Australian state of Victoria—which seats the second most populated city in Australia, Melbourne—has enforced a ban over the use of cages in combat sports since 2008, keeping the UFC away from one of its most enticing landmarks: Docklands Stadium, also known since 2009 as Etihad Stadium.

But after recent elections, the Labor Party is now in power in the state of Victoria with a pro-mixed martial arts stance in accordance with the rest of the country, and it is expected that they will lift a ban that most people consider ludicrous. The argument for the ban stated that combat sports in a fenced-in environment encourages street violence. It’s full of holes, as there is no supporting evidence of this farfetched claim. We think that forbidding the use of a cage to host mixed martial arts events—which are otherwise fully legal in Australia—is logically akin to forcing a football game to take place on a basketball court, ultimately making the sport more dangerous than anything else. Fighters are more at risk in their sport if they have to compete in a roped-ring, as they could easily plunge off the side of the ring.

In any case, the UFC has set its sights on Docklands Stadium to celebrate the new turn. It features a retractable roof to ensure perfect conditions at all times. It can be configured into several formations to fit the needs of different sports and entertainment events, but this mammoth building is used first and foremost for Australian rules football, which has the highest spectator attendance of all sports in Australia. Now, it may be host to a numbered UFC event that could feature some heavy players headlining—rumors afoot include Ronda Rousey and Conor Mcgregor, and that the event will certainly feature at least one title fight, if not two.

If the UFC does its job of coming up with an unforgettable card, there should be no reason why this stadium’s 55,000 seats aren’t filled with Australian fans—especially if they bring back crowd-favorite and Sydney-based heavyweight Mark Hunt.

This is great news. We want to see the UFC use more of the world’s biggest and best sporting venues to take mixed martial arts to the forefront of the world’s sports.

Running with the Cubans: Edgar Kaliboti's Lifetime of Martial Arts