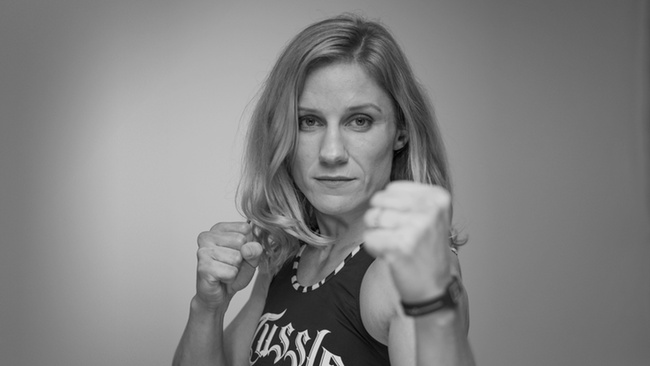 “Every time Barb Honchak chokes a bitch out a unicorn farts a rainbow.” This is the promise that emblazons the bright blue front of Invicta FC flyweight champion Barb Honchak’s brand new t-shirt, which was released just in time for her hometown fight at Invicta FC 9 in Davenport, Iowa on November 1.

Honchak, who won the promotion’s inaugural championship match against Vanessa Porto in April 2013 and successfully retained her title with a December 2013 win over Leslie Smith, will be defending her belt against the dominant Japanese veteran Takayo Hashi in the main event. And she’s prepared for a battle. While both fighters come from grappling backgrounds, they’re equally adept at striking and both of their impressive records (Honchak’s is 9-2 and Hashi’s is 15-4-1) are packed with a mix of submissions, TKOs and decisions. The championship fight can—and probably will—go anywhere. In other words, a unicorn earning its farts is only one of many things that may happen when Honchak and Hashi step into the ring. 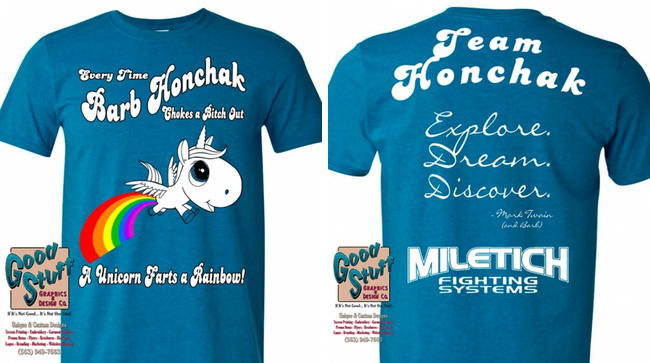 In the days leading up to the big fight, Fightland talked to Honchak about her preparation for the match, her close friendship with the UFC bantamweight’s number one contender Cat Zingano, the importance of having her medical professional husband in her corner, and the growing success of women’s MMA. We also talked about unicorns.

Fightland: First of all, I really want to talk about your new t-shirt. Please tell me that’s real.
Barb Honchak: (laughs) It’s for real. There’s a local guy who makes shirts for all of our fighters at MFS [Miletich Fighting Systems] who fight here locally. His company is called Good Stuff graphics. He wanted the opportunity to work with me, but I never fight locally. Because [Invicta 9] is a local fight, he was interested in doing one, and I already had a couple of people be like “Hey, are you going to have shirts?”

So my friend, Julie Stout, and Mark from Good Stuff Graphics put that shirt together and then showed it to me and asked if it was all right and I was like “All right. Let’s do it.” Really, it was just supposed to be a small, local thing but we’ve had so many demands that they’re working on putting a web store together for it right now.

How does an MMA fighter become so strongly associated with unicorns?
When I was little, I had unicorn wallpaper. It’s kind of been around forever. And then I think it was my last birthday, one of my friends gave me this little plastic unicorn that she found at a Goodwill store for my birthday. He’s a carnivorous unicorn named Larry and that kind of restarted it. I would take him with me when I would travel and I would take pictures and send them to my friends. It just kind of went from there and my childhood stuff came back.

And Cat Zingano, I always tell her son that I’m a unicorn. I call him my little jellyfish and I try to convince him that I’m a unicorn. So then Cat started posting all of this stuff with the unicorn and the cat and it just sort of snowballed. So I was like “All right. There’s going to be a unicorn on that shirt.”

Now let’s actually talk about your fight. Takayo Hashi is an interesting match for you. Both of you come from strong grappling backgrounds, but you’ve also evolved into very well-rounded fighters over the years.
Yeah. She’s phenomenal on the ground. Every fight I’ve watched her, she’s just dominated people there and I think we’re pretty similar there where we both like to fight from the top and top control. She’s got great hips, great movement and she’s got a solid background in Judo as well. She’s definitely going to be a tough fight.

Cat did fight Takayo and she took Cat into the third round. That’s nothing to sneeze at. That’s hard to do with Cat. So she’s extremely resilient. She’s a tough, tough girl. It’s going to be a tough fight. 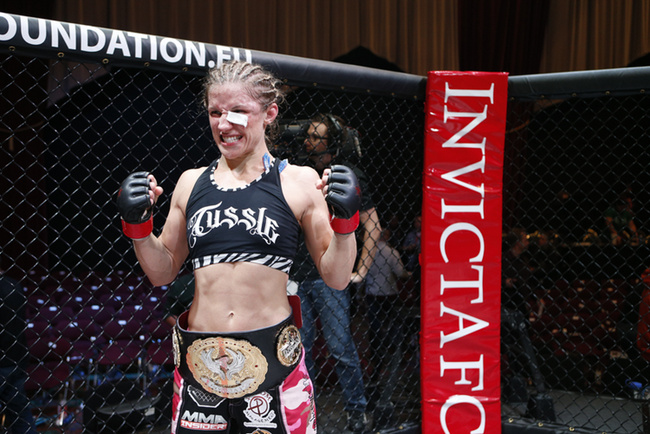 Cat did end up defeating her rather definitely in that third round, though. Is it helpful at all to have a good training partner and friend who holds a victory over your forthcoming opponent?
I mean, it’s nice to get her perspective, but that fight happened so long ago that I think it’s safe to say that neither Cat nor Takayo are the same fighters now that they were then. It is nice to get a perspective, but I don’t take too much weight on it, because I don’t know what Takayo’s working on. I don’t know how her strength has changed. There’s a lot of things that could vary from then. I did ask her what she thought of Takayo but, at the same time, I had to take it all with a grain of salt because it was so long ago.

Is there anything about your game plan going into this fight that you can or would like to share?
I don’t really Game Plan game plan, I just fight my fight. I just get in there and, once I get my hands on you, I have an idea of what I want to do. But until I really get in there and feel you and know how I feel at that time, I don’t necessarily have a solid plan in my head. Obviously control, I think, for both of us. I think we’re both looking to be the one that controls the other. Takayo likes the clinch. I like the clinch. She likes the ground. I like the ground and I think we’re both more than happy to bang it out. So the fight could go anywhere. I really think it could.

You also managed to take Cat to the third round when you fought her in 2010. What that the first time you two met?
Yes. That was our first meeting.

There’s something so classically women’s martial arts about that: You beat the shit out of each other and then you become best friends.
We had a tough tough fight and I was a little concussed after that fight and Mauricio, her husband, came back and asked me “Hey that was a great fight, you should come train with Cat some time.”

I remember lying on the mat, feeling kind of dizzy and not feeling so great and, the second he came in, I stood up like “I’m good! I’m good! She didn’t hurt me that bad.” And I’m sure I said something like “Yeah! That would be great!” never really thinking that they would actually give me the call, let alone fly me out to come train with her, which is exactly what they did for her next fight.

I think we were both a little bit nervous about that first time when I flew out to Colorado and stayed in their house. She was flying me out, this girl that she didn’t know if I was coming for revenge or what. And it just worked out really well. I learned so much from her and Mauricio and their camp about fighting and how she trained. because she was on a different level than I was then. She was very professional. She was already doing it full time. She owned a gym, ran a gym, and fought and that’s all she did. I was still working a 9 to 5 and trying to do everything else at the same time. So I learned a lot from them on how to fight, how to prepare, things that that I should be adding in, like lifting (laughs) protein shakes, stuff like that that I wasn’t doing at the time. I credit them a lot with my growth in the sport.

Your husband is your cutman for your fights. What’s that like?
It’s nice. He’s been in my corner since the very first fight. I can’t think of a single fight where he wasn’t in my corner. Through all the different camps all the different fights, he’s been there and he knows me, he knows how to keep my head right, he knows how to work with my coaches. And off course, on top of it, him having his medical background gives me a whole lot of faith in his ability to fix me up and keep me in that fight, if for some reason I need to be.

He’s also been instrumental in helping you pursue this career at all, I understand.
I couldn’t do it without him. I couldn’t. He’s the one that told me that I needed to quit my job and do this full time and I never would have done that. I think it was the scariest thing I’ve ever done was quitting my solid job at a university with benefits and health care and all of that to fight professionally. And, at the time I did it, Invicta didn’t even exist and other organizations with women were folding left and right. So it was difficult to do and I never would have done it without his support.

Is fighting full time less scary now?
Yes. I mean, there’s opportunities now. There’s a lot of opportunities for us now. All of the promotions that are... I don’t want to say lesser, but maybe a tier below the UFC, the majority of them have women now. At multiple weight classes. So there’s other avenues. There’s other places to go. And having them in the UFC, on the big promotion, it’s like we’re close to being mainstream now. You can see it. It’s happening. So yeah, it’s not nearly as scary as it used to be.

You have a bachelor’s in molecular biology and a Masters in genetics. Does that have any application to your current line of work?
Sort of. The way I look at it is that I approach fights similar to the way I would approach a final in college. You have a ton of studying you have to do You have to learn. You have to prepare. You have to get ready. There’s a lot of grinding and late nights and discipline that goes behind it. I think the discipline that it took to get through school and get those degrees is very similar to the discipline that it takes to maintain the day in day out even when it gets grueling gym time. II think the mentality that goes along with obtaining degrees and the mentality that goes with fighting, there are some similarities to that.

The Dawn of a New Invicta FC