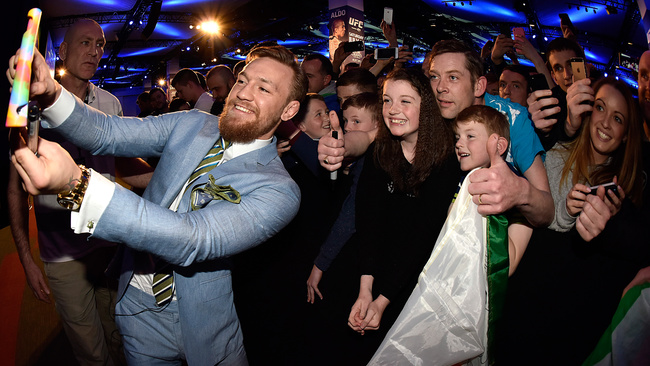 The writing was on the wall last week when the news of Jose Aldo’s injured rib surfaced. UFC claimed the fight would go ahead as planned, but as Andre Pederneiras continued to make comments underlining how “painful” Aldo’s injury was, the Irish expected the worst.

It wasn’t until after his first round TKO win over Dustin Poirier that Jose Aldo became a fixture in the casual Irish MMA fans’ consciousness. It had always been about McGregor. ‘The Notorious’ became an overnight sensation after his debut victory over Marcus Brimage, but after his sole UFC decision victory over Max Holloway the Irishman was forced to take a year out due to a knee injury. Despite that, he still managed to return in Dublin last July with what was the fastest selling promotional event of all time.

With the Poirier win, the title talk became legitimate with even Dana White agreeing that McGregor’s performance may have been worthy of a championship date. Then, when ‘The Notorious’ finished Dennis Siver in their January bout in Boston, the Aldo talk took another boost.

A highlight reel of the featherweight champion started doing the rounds on Ireland’s social media feeds. The majority of the film captured Aldo back in his WEC days and from the various other promotions he had fought for before UFC. The vicious knees from the clinch, the devastating power—all hallmarks of why he became the world’s 145 lbs king—were featured in the video, and they became the stable of the casual fans’ arguments as to why McGregor would lose.

“Did you see that video of Aldo?” they would ask. “He looks really good. Don’t get me wrong, Conor is good, but seriously, that video.”

The thing that really cemented Aldo into the Irish mainstream was the UFC 189 World Tour, that last leg of which was hosted by the Irish capital. The national broadcaster showed up to cover the event and it was shown later that night on terrestrial TV. Although the reaction of the crowd to McGregor was very much for the Irishman, as the footage was shown across the country a lot of the Irish started to side with the Brazilian.

Taking the belt was a step too far for many. The treatment of Aldo, the heckling he was projected to, was even too much for some of the most diehard MMA fans. Liveline one of the most popular radio programs on the island, a current affairs show, spoke at length about the world tour the day after. They critiqued the fans that launched tirades at Aldo and McGregor’s behavior in general. Essentially, it was a home run for UFC because they got a whole nation talking about a fight that set to happen over three months later. 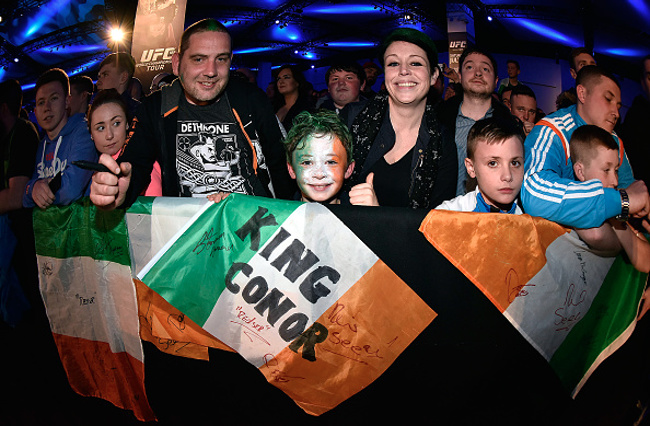 As the fight has grown closer, the knowledge of the Irish MMA fan base seems to have grown too. Opinion was split on the UFC 189 main event bout and talk quickly turned to what would happen if McGregor had his hand raised. “He’s being protected from them wrestlers,” is a common recital. “Let’s see what happens when he gets Mendes or Edgar.”

Realistically, McGregor could walk away with a win from a bout with either Mendes or Aldo and even his own countrymen would still want some questions answered. A win over Aldo would still mean the wrestling issue wasn’t resolved and a win over Mendes still isn’t a win over the undisputed champion, Jose Aldo.

The real worry was McGregor not fighting at all as the news of Aldo’s rib surfaced. After so much money had been forked out, after such a long build up, they wanted to see their guy fight for a world championship, and now with Mendes in place, he still gets to do that. It might not be the undisputed title, but should McGregor win he still gets to hold a title aloft for the people who have no doubt saved up a lot of money for the trip to ‘Sin City’.

There are plenty of complete fanatics heading over from Ireland too. They no doubt wanted to see McGregor fight for the undisputed world title, but things could have been a lot worse.

Truth be told, McGregor could have pulled out of this fight. If there is one thing that we do know about ‘The Notorious’ is that he is loyal to his following and more importantly, loyal to the Irish. He claimed he was offered to postpone the bout and meet Aldo seven weeks later, but he felt obliged to perform in front of the Irish people.

“The fight might have had to be rescheduled for seven weeks time,” said McGregor in a media scrum after Aldo’s injury was first announced. “I said that there were a lot of Irish people coming over here, it cost them a lot money. They came here to see me fight and to see me perform, so as long as I’m fit and healthy I think it’s only right that I come and perform.”

McGregor deserves serious kudos for stepping up and facing Mendes on a little over a week’s notice. On paper, it’s a completely different fight with the threat of the American’s wrestling background, despite his latest performances being contested mostly on the feet. Whether it is out of his loyalty to the Irish, or him not wanting to waste his weeks of preparation, ‘The Notorious’ is taking a risk, even if he doesn’t want to admit it.

As for Aldo, the Irish seem to have two views on his withdrawal. Some seem to side with McGregor in thinking that the featherweight frontrunner was simply afraid of the man that stood in front of him. Others believe that a rib injury is just too much to fight with. Again, the main thing is—everyone is still talking. So it’s full steam ahead for July 11 in the MGM Grand.

It’s Official: José Aldo Is Out and Chad Mendes Is In