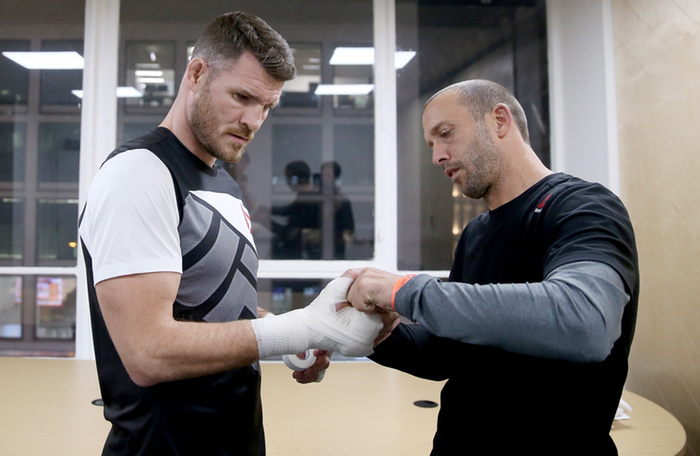 Late pullouts have become commonplace in MMA over the years, but you can’t help but feel that familiar pang of despair when you hear the news. The latest casualty came yesterday when former champion Chris Weidman was forced out of his UFC 199 title bout with Luke Rockhold.

While the rest of the world mourned the loss of championship contender, Michael Bisping must have been salivating at the thought of stepping in and attempting to avenge his loss to Rockhold. The bout being contested a for the middleweight title would also be a huge factor given how elusive the scenario has proven to be for the Brit. If it happens, Bisping will shed the underhanded title of “best fighter to never fight for a title”.

Several sources confirmed that Weidman was off the card after some whispers started to trickle through on Internet threads. Rockhold quickly took to Instagram to state that he would take on any replacement that UFC could put forward for him.

“I might lose my hair but I will never lose my work ethic,” posted the middleweight champion. “No matter who, no matter when, no matter where. I’ll be ready.”

Bisping wasted no time in putting his name in the hat to be Weidman’s replacement with a tweet he put out after the news had broken.

“Training camps separate the boys from the men. This sport isn’t for everyone. 2 weeks notice? I’m down,” he tweeted before posting a speculative thought on Chris Weidman.

“I’ve seen less brittle Pringles than some of these middleweights. #usada.”

Ronaldo ‘Jacare’ Souza is a man that a lot of people have called on to replace Weidman. Despite fighting last weekend and claiming a first-round victory over Vitor Belfort, a lot of people believe he is the right man to step in on a little under two weeks notice to take the championship bout.

Souza has more than likely established himself as the number one contender with a win over Belfort. This is the fourth time that Weidman has pulled out of a contest in 25 months and that will not sit well with UFC when thinking of future contenders, although they will definitely want him to play some part in their November 12 show at Madison Square Garden as a native New Yorker. By stepping in to replace him, Souza could sacrifice a full camp and proper preparation for a championship contest.

Bisping may never have a better opportunity to claim his title shot. The three men he has lost to in number one contender bouts–Dan Henderson, Vitor Belfort and Chael Sonnen–were undergoing the banned testosterone replacement therapy treatment when they fought him. Because of those circumstances, it’s always seemed like Bisping is owed a date with the title. Another thing that will help him is he is coming off a win against a man considered by many as the greatest fighter of all time, Silva.

If you could take any middleweight in the world and make him sell a fight on short notice it would be Bisping. The fact that he and Luke Rockhold seem to genuinely detest each other will only help the situation.

Some of the greatest shit talking in the history of the middleweight division came when Rockhold met Bisping in their Sydney main event in November 2014. Suffering a cut over his eye that he claims impaired him before Rockhold claimed a second round guillotine win, Bisping has always wanted a chance to set the record straight against the AKA man.

Even with the monumental task of dealing with ‘The Spider’ in front of him with the backdrop of his hometown crowd in London’s 02 Arena, ‘The Count’ still had Rockhold on his mind.

“Obviously, Weidman and Rockhold are having a rematch, which I thought was curious matchmaking at best, but hopefully, I beat Anderson and then I get to fight Rockhold. Rockhold will beat Weidman again, and hopefully, I will get to fight him again down the line.

“I’ll get that rematch, he won’t head butt me this time and split my eye wide open. The blood won’t be going straight into my eye and blurring my vision. This time next year I will be the world middleweight champion, it’s that easy.”

Souza is not known for his prowess with the English language. Calling him in on short notice may not have the same impact on the PPV market as bringing the outspoken Brit who, love him or hate him, always get the masses to tune into his fights.

Weighing the Options of Michael Bisping