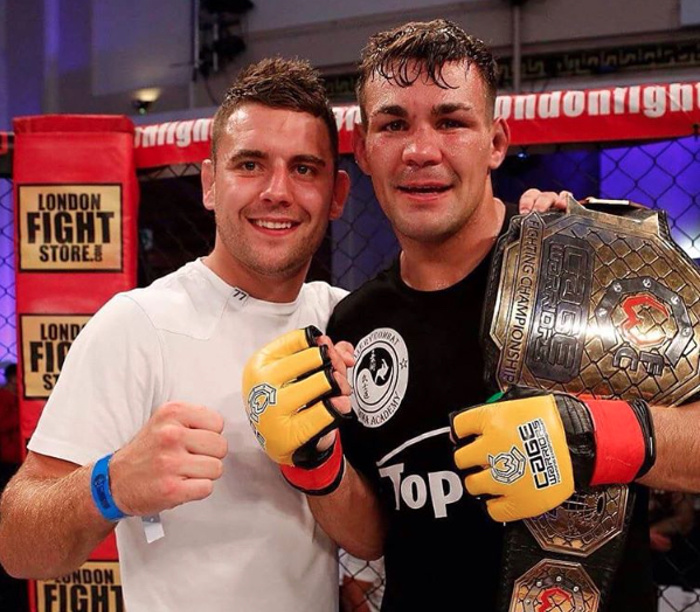 It was the day Welsh MMA’s contingent of fans has been long clamoring for. On Thursday 6th October, 2016, the UFC finally signed its first Welsh fighter to complete the collection from the British Isles.

Jack “The Hammer” Marshman is the man to have earned the coveted role as Wales’ most prominent fighting son to set foot in the cage—a country which so vehemently supported its world champion boxers in the unbeaten Joe Calzaghe and latterly Enzo Maccarinelli, Nathan Cleverly and Lee Selby.

It’s been a long time coming for Wales—a country which has produced a number of good fighters with fantastic nicknames to boot. Bantamweight Brett “The Pikey” Johns has continually impressed and has won titles at top promotions Cage Warriors Fighting Championships and Titan FC, while the likes of John “The White Mike Tyson” Phillips and Lew “The Foot” Long have been successful on both domestic and international stages.

Marshman, a soldier serving as a Lance Corporal with the 3rd Battalion Parachute Regiment, was one of the Welsh names which always seemed destined to grace the UFC’s Octagon some day. Only 26-years-old, Marshman has plenty of experience which perhaps belies his age, boasting a 20-5 record. He has also fought some tough European competition, beating the likes of UFC veteran Che Mills and The Ultimate Fighter: Smashes contestant Bola Omoyele, while losing to current and former established members of the UFC roster in Scott Askham, Xavier Foupa-Pokam and Tom “Kong” Watson—the latter of which saw Marshman walk into the cage as a 22-year-old relative rookie to Watson’s six-year pro career. In fact, Watson’s win over Marshman was the one that earned him his own call up to the UFC.

Riding a six-fight win streak, the man from Abertillery earned his first ever world title in July, defeating French fighter Christopher Jacquelin by knockout with just two seconds remaining in the opening stanza for the Cage Warriors middleweight championship.

Marshman was dominant throughout the contest with his striking, which was as powerful as it was precise. Soon, Jacquelin crumbled under the pressure mounted by Marshman and crashed to the canvas after tasting a perfect right hook—one which forced the referee to call an end to proceedings. It was the perfect performance from Marshman, who was fighting in front a large TV and Internet audience with the Cage Warriors event broadcast on one of the UK’s leading sports channels, BT Sport (the country’s UFC broadcaster); while UFC Fight Pass streamed the fight live for international audiences.

After his first world title win, Marshman respectfully outlined his ambitions to be well beyond the promotion he found himself in at the time. "I stuck to my game plan and did what I had been training to do for weeks and it paid off. The dream for me now is to go to the UFC. Everyone wants to go to the UFC, that's the dream for every cage fighter. Now that I've won the world championship, I hope I will get signed by them."

Cage Warriors is a promotion which has been instrumental in helping build European MMA, with former competitors Conor McGregor, Michael Bisping, Gegard Mousasi, Dan Hardy, Paul Daley, Jack Hermansson and Antonio “Big Foot” Silva—who was a long-term member of the Wolfslair stable based in England’s North West—earning their stripes under the CWFC banner before moving onto the international stage.

Cage Warriors is also a promotion which embraces its role as a feeder league to the UFC, proven by its social media accounts’ apparent pride in helping a man achieve his goals—and that’s despite the late call-up throwing its upcoming show on October 15th, Cage Warriors 79, which was due to be headlined by Marshman in his first title defence against Andrea Michailidis in Newport, Wales, into total disarray. CWFC President Graham Boylan echoed those sentiments, saying: “Many have said this is long overdue, as Jack has been at the top of his game for a while, and so he leaves with our best wishes. He has been a fantastic ambassador for this sport and for us.”

Welsh sport has enjoyed a belated purple patch of late. The Welsh national football team wowed audiences across Europe, surprisingly exceeding the expectations of most by earning a berth in the Euro 2016 semi-finals—defeating the highly fancied Belgium team en route to the final four. Marshman’s UFC signing even prompted the BBC to tweet about it, a broadcaster and media entity which was previously freezing cold in its reception to MMA—that was before BBC Three’s partnership with the UFC, anyway.

The soldier from Abertillery will make his UFC debut by facing off against streaking Swedish middleweight Magnus Cedenblad on 19th November in the UFC’s long-awaited return to Northern Ireland in Belfast’s SSE Arena—the promotion’s first visit to the capital since UFC 72 back in June 2007.

Cedenblad, a towering middleweight at 6’4”, made his UFC debut in 2012 to much hype on the European MMA circuit, riding a seven-fight winning streak with six stoppage wins. However, he was succumbed to a second-round submission to a hard match-up in Francis Carmont. But, now accustomed to the bright lights of the UFC, Cedenblad is enjoying a four-fight winning streak under the UFC banner, defeating Jared Hamman, Krzysztof Jotko, Scott Askham and Garreth McLellan in the process.

It’s a tough test for Marshman as he steps into the Octagon for the first time. But, it would appear Marshman is extremely grateful to the gym, Tillery Combat, which has stuck with him over the last decade while excited to open this new chapter of his MMA career.

“Well the news is out. It's been a mental week and I just want to say thanks to Richard Shore, who I started training with at 15. I'm a few weeks shy of 27 now and I've had a long and tough MMA career with huge ups and massive downs and Richard has stuck by my side throughout.

"I had my doubts and thought about knocking it on the head, but they pushed me to a world title and now a UFC contract. With that all being said getting to the UFC was a goal not the end: this is just the beginning."

As his team said, Wales was once deemed the “forgotten nation” of European MMA. But, the UFC may have struck gold by signing a Welshman who has forced stoppages in 85% of his 20 victories. Now, Marshman will have the chance to etch the Welsh dragon on MMA’s consciousness on the sport’s biggest stage of all.