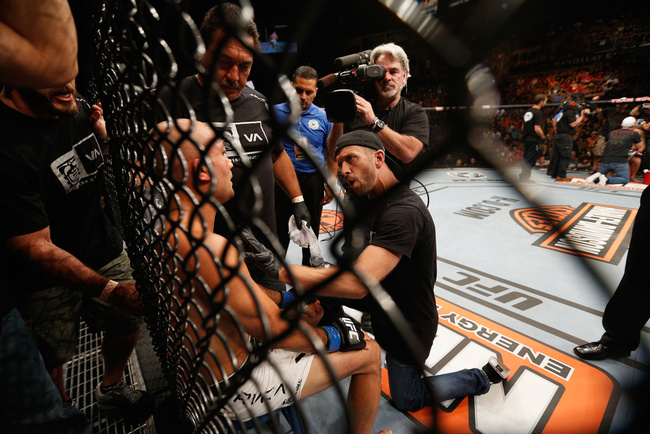 BJ Penn didn't step in the ring with Frankie Edgar last night. A bad Renan Barao impressionist did. A man who wasn't sure of his identity. A man who was so desperate for answers to 'The Answer' that he had become a jumbled array of parts which would not, and could not, work in harmony.

The identity crisis of BJ Penn is similar to that which you will see in any great fighter who has been “worked out”. You can talk about “motivated” BJ Penn, and “the look in his eyes” at the weigh ins all you want, but styles make fights, and Edgar's game was always a horrible stylistic match up for Penn.

BJ Penn's golden years were some of the finest in mixed martial arts. He was the first lighter weight fighter to really break through and interest the casual fan base. A terrifying finisher, a master technician, and all the while ruthlessly offensive. Penn once described his philosophy—in one of his online jiu jitsu videos—as taking the basic techniques and ramming them down his opponent's throat.

A Brazilian jiu jitsu world champion who could box. The closest we had come to that before was Murillo Bustamante, and he was nowhere near as venomous on his feet as Penn. You can reel off a list of names of jiu jitsu players who worked religiously on their boxing, but none ever became as effective on the feet as Penn.

A standard Penn performance was mostly striking. In his early career Penn was all about the left hook, but around the time of his return to the UFC we started to see him standing more side on, throwing the counter jab and slipping to set up his right hand counters. The modus operandi was always to break a man standing though, then Penn would take his man down, start working through his smashing passes (mixing in some razor sharp elbows along the way) and by the time he mounted his opponent wouldn't even want to be in the cage any more. 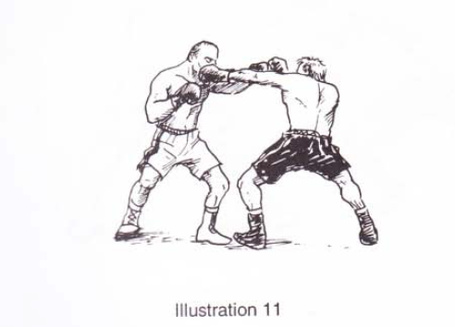 At his best, Penn boxed from a bladed stance. He was a dip away from his counter jab, and could hide behind his lead shoulder to weather most attacks, returning with that classic Eddie Futch counter uppercut.

He could advance or retreat as rapidly as needed and he demonstrated that beautifully as he drew out the charges of Diego Sanchez. After the first punch had missed, there was a good deal of time where Sanchez was chin up, pouting, with no defence before his next punch, and Penn would make him pay every time.

The bladed stance is a trait of very traditional boxing as it exposes the least target and provides the longest reach from the centreline to the end of the jab. You will remember two other fighters who use it, the Diaz brothers, and they suffer from exactly the same difficulties.

The side-on stance with the lead leg more turned in exposes the fighter to low kicks, which buckle his stance and prevent him from countering. But also, it is far more difficult to pivot to face someone who is circling past your lead leg when you are in a more bladed stance. Consequently both the Diaz brothers and BJ Penn have struggled against fighters with strong kicking games and good lateral mobility.

Set aside your “he's just running” mind set if you have one, and instead remember how easy it was for Carlos Condit, Georges St. Pierre, Josh Thomson, and Benson Henderson to move around the Diaz brothers and never get trapped on the fence, where they love to do their best work. Penn was never really an infighter along fence, he liked to draw opponents out and counter, but he had the same difficulty with Edgar's mobility.

Sean Sherk's wrestling was every bit as good as Frankie Edgar's, and he mixed punches into takedown attempts nicely. But he always did it on a line. And if you start fencing with BJ Penn, he's probably going to mess you up—especially if you're giving up reach like many lightweights did, though many welterweights did not.

Go straight at BJ Penn with single punches at a time, and it probably won't end well.

Edgar's mobility played into his takedown game. It was never one element of his game which won him his bouts, but his complete game.

The Return of Penn

Much was made of Penn's training at Nova Uniao before his return, where he worked with Jose Aldo, Renan Barao and many other elite lighter weight fighters. Many would argue that none of this showed in the Octagon, but in truth it seemed that too much did.

Rather than sparring with men who can move and kick—honing his reactions to check kicks from his stance which naturally disadvantages him against them, and working on his pivots and ring cutting—Penn had apparently been turned into a poor replica of Renan Barao. The high stance, the upright back, the squared hips.

Here's the brutal truth. No matter how good a fighter is, they are good at doing things their way. You could not teach Anderson Silva to fight like Fedor or Georges St. Pierre, or vice versa, with anywhere near the same efficacy.

Penn looked unpracticed in his new stance and I was, sadly, lost for words when a friend asked me why he was “mincing” towards Edgar. Penn's footwork was atrocious. His back foot was moving first most of the time, but not often enough that it seemed to be deliberate. He followed Edgar around the ring, a squared up target, unable to sway away with his head movement, and unable to punch.

Penn's jab was gone. You cannot jab with authority when your feet are together. Kenny Weldon discussed this in talking about “fighting tall”. No matter who you're watching box, to throw a good jab, they will normally lower themselves to eye level before jabbing. Renan Barao fights from a high stance much of the time, but when he jabs he's suddenly in full boxing form, transferring his weight into his lead leg. 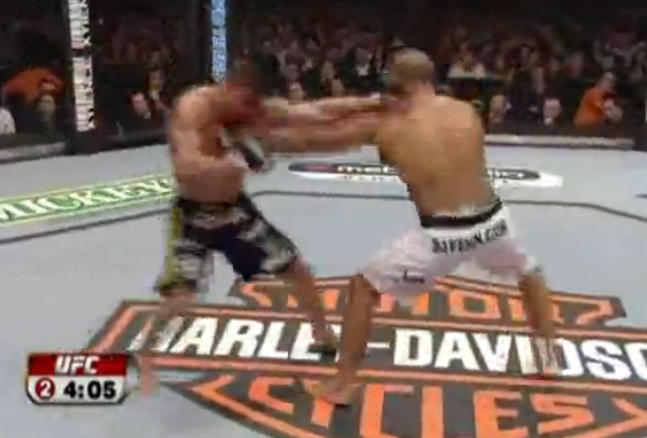 Need to spread your feet to jab well.

Penn's punches looked like slaps, there was no body weight dropped into them, no twist of the trunk even. He looked as though he was—for the first time in his career—doing what someone else told him, and he was doing it at the expense of fighting well.

Penn was able to check some of the low kicks that Edgar was throwing—among the first Penn has checked in his career—but his narrowed stance and awkward footwork made him an easy target for takedowns. You will remember Penn, in his long stance, would feed the single leg. There is a wealth of footage of Penn hopping towards the fence on one leg, hitting his opponent all the way, then fighting off the takedown while leaning against the cage.

In his new stance, it was easy for Edgar to attack the lead leg (as he always does), then scoop up both legs and land in guard.

BJ Penn's guard has always been a curiosity in MMA. He's incredible at holding it, recovering it, and sometimes getting up from it. But he has never submitted an opponent from guard in mixed martial arts. Yet throughout the “grease-gate” saga, it was made out that Penn was incredibly dangerous from his back.

Against Edgar, Penn alternated between having his feet on Edgar's hips and various contortions of butterfly guard, but at no point was he on the offensive. In their second meeting, Penn's work from the guard had been a sight—threatening sweeps and getting up from underneath Edgar. In this bout, he looked as though he had none of the limb control that he used to.

Just as Matt Hughes and Georges St. Pierre had done in their second meetings with Penn, Edgar was content to stay in guard and simply hammer away. The end came in the third round, but many of us breathed a sigh of relief.

With a great fighter, it takes a truly crushing defeat before we can actually put their career in perspective. There were a great many people who thought that Muhammad Ali could beat Larry Holmes, after all. And some thought he could take a rematch before he lost to Trevor Berbick.

BJ Penn is remembered as one of the finest lightweights ever, defending his lightweight title 3 consecutive times and finishing each challenger. He is also, rightly, remembered for his incredible wins over Matt Hughes, considered the second best welterweight of all time. There is no doubting that Penn had Hughes' number.

But we must also remember that Penn was not a good welterweight. He fought there out of stubbornness and never picked up a win over anyone not named Matt Hughes.

What Penn's career really highlights, however, is that our definition of a complete fighter is forever changing as the sport improves. BJ Penn could do it all when most were just grapplers or strikers who learned to sort of deal with the other elements of the game. He looked as overwhelmingly talented from his UFC (and MMA) debut in 2001 to his crushing of Diego Sanchez in 2009. In all that time, no-one at lightweight could match him for skill.

But Penn couldn't really “do it all”. He couldn't kick for toffee and he struggled against lateral movement. He was easily winded by body shots (see Matt Hughes II, Georges St. Pierre II, Nick Diaz), and he couldn't check kicks at all well.

Is that a smear on Penn? No. No one can do it all. In fact we owe Penn a huge debt of gratitude for firstly, attracting so many new fans to the sport over a decade, but also for forcing fighters to improve across the board.

He revolutionized the use of the jab in MMA and made fighters understand that the jab alone could break a fighter. Penn battered a young Georges St. Pierre with the counter jab to the point where St. Pierre said “I need to learn me some of that” and mastered the technique himself. Not only that, before Penn mastered the jab, he was one of the first fighters to really use a left hook (rather than wild swing) effectively in MMA, as a counter strike.

Penn's smash passes and “dope mount” are legendary, as he crossed his opponent’s legs over each other and as soon as they tried to kick free, transitioned straight into mount. And Penn's various passes from half guard to mount seemed unstoppable—whether it be his no-hands pass or his near side underhook pass (still incredibly rare in MMA).

Penn's list of innovations is incredible. Penn was probably the first fighter I have seen use a heel kick to the abdomen from the back—which Jon Tuck secured a submission with the other day.

Penn pioneered the use of the legs to trap an arm from back control, which we now see men like Marcelo Garcia utilizing constantly in BJJ competition.

Penn was a technical genius with the animal instincts to lash out with whatever he could, and use every moment to his advantage. Whether it was elbowing his opponents right in the eye or smothering their mouth with his hand to make them squirm and give up a limb, BJ Penn was the most violent kind of prodigy, and produced the most prodigious kind of aggression. The man in the cage last night, was not BJ Penn.