Jack Slack: A Weekend of Breakdowns 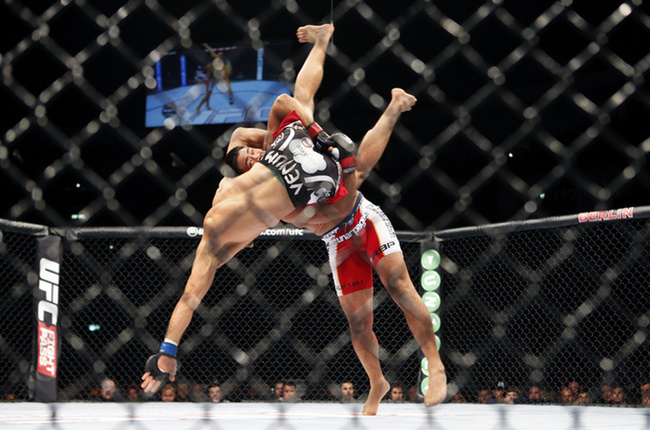 If you are a fight fan like me, you had your entire Saturday wiped out by fights. And you wouldn't have it any other way.

You might not have seen all the biggest names of the sport in action, but there were three separate fight cards that demanded your attention. Some 13 hours of fights in the UFC as it put on events in Germany and Brazil, and the highly anticipated rematch between boxers Carl Froch and George Groves was going on in between!

With so many fights on, there were plenty of lessons to be learned.

Vaughan  Lee looked absolutely sublime in his last showing, against Nam Pham, where he picked Pham apart on the feet with beautiful snapping kicks and punching salvoes. Lee's fight with Alcantara lasted less than a minute, however, and he was left on the mat for some time afterwards.

Rushing out of the gate, Lee immediately got in Alcantara's face with a nice flurry of punches. He then stepped up to throw a front snap kick—something we're seeing a lot more in MMA nowadays, and I love that—while loading up his same side hand to punch.

This is a traditional karate trick. You'll see many karateka kick and rather than straighten the arm on the kicking side, or keep it in place as cover, they'll load up a punch. Normally this is done by not committing completely to the kick. Kicking with a snap of the hips rather than a full turning of them.

It was a favorite of Andy Hug, my favorite kickboxer of all time. Here it is off of a spinning kick against Mike Bernardo.

Notice the dropping of the kicking side hand, and the holding back of the shoulder until retracting the kick.

It is also used effectively by another karateka, Lyoto Machida. Most memorably, he used it to score a knockdown on Rashad Evans. It is just so unusual to have a punch coming as the kick retracts on the same side.

The trick of it is that it's really like a superman punch. The hip goes forward, then retracts and it is the upper body leaning forward as the hips swing back, rather than turning, which provides power for the punch.

Here Hug performs it against a young Duke Roufus.

What you will notice, however, is that both Hug and Machida performed the technique the majority of the time from an open guard position. That is southpaw vs orthodox. The distance is generally greater in an open guard engagement, and both of those men did a good job of using the kick to keep the opponent off of them just long enough to have them run in on the punch. When they used roundhouse kicks, Hug and Machida aimed to brace the opponent's arm against powerful strikes from the side, then sneak a quick straight inside of it.

Machida has also used the front kick, with his rear leg, to rear straight combination a few times. A front kick to the midsection can encourage an opponent to rush in as it is retracted. Machida caught Tito Ortiz running in with one of these straights off of a front kick.

What Lee did was to sprint in, get too close on the kick, and then have no distance to land a good snappy punch. He punched across himself to reach Alcantara, and got clocked almost on the back of the head as a result.

Distance is the key to the fight—he who controls it has all the power. Sprinting in on an opponent like Lee did is only giving them the chance to crack you. This was a complete departure from the lovely, measured work Lee did against Phan. Props to Alcantara, however, who picks up his third win in his last 4, with the sole loss coming to Urijah Faber.

You all knew this was a squash match going in. Maldonado is one of the bravest people in the fight game, stepping up on short notice and giving up huge amounts of natural weight in a division that isn't his own. Miocic did exactly what was expected of him.

Fabio Maldonado gets a hard time in my articles because I have such a hard time wrapping my head around him. He has sublime hands—in that when he puts together a combination it is marvelous to watch and his opponent readily feels the effects. But every other part of his boxing game is painful on the eyes.

Most important among these is his absolute inability to get inside and do the infighting he loves so much without taking punches on the way. He comes in with a rod up his spine, but his hands in no position to defend himself, with a loose jab as he tries to work his way in, and almost every time he gets cracked. 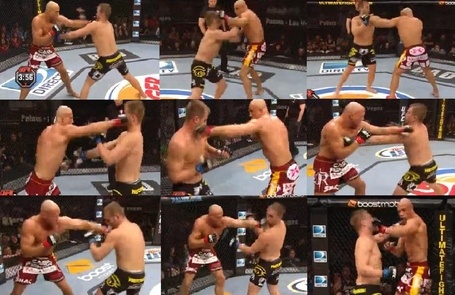 The infamous Fabio Maldonado collage of pain. Every single one of these happened as he stepped in to attack.

It is made worse by the fact that he absolutely refuses to move his head or change his level when he jabs to the body. Instead, Maldonado will step in and jab downwards. The body jab is supposed to be a long range technique. You crouch until your have lowered your shoulder to the height at which you want to punch, and this ensures that you use your maximum available reach. Punching upward or downwards sacrifices reach, and removes obstacles from your opponents punching path.

The knockout came quickly, and it was the direct result of attempting to jab downward at Miocic's body. Stepping in and punching down, Maldonado ate a right hand coming back and was dropped for the finish.

On the subject of body jabbing, you know who does it well? George Groves. What Groves didn't do well until the eighth round of this contest was throw his left hook. And the same was true of Froch. The two men traded jabs for seven rounds, without a good left hook in sight. When Froch wanted to win the round he would run in, chest to chest, and swing in flurries to the body.

Suddenly in the eighth round, Groves realized that the left hook was there. When two men jab at each other for an extended period, whether they realize it or not, their rear hand starts to come closer in, more in line to block the jab and neglecting the path of the hook. This is why the 1-2-3 (jab, right straight, left hook) and 1-3-2 (jab, left hook, right straight) can be played off of each other so well.

Groves started to find his mark with the left hook, getting back into an uneventful fight that he was dropping points in. Suddenly, Froch threw a left hook, got to an angle and landed a right that ended the fight in one punch.

It was a terrific punch and set up. By using the left hook to take the angle, Froch placed Groves in front of his right shoulder—shortening the path of Froch's right hand—and lengthened the path of Groves' left hook. This is what is meant by scientific boxing and angles. Lengthening his punches and shortening your own. Froch could have been 40 or 50 years old, when he took that angle there was no way that Groves' left hook was getting to its mark faster than Froch's right straight.

The main event of UFC Berlin really demonstrated that Mark Munoz, though he has learned to throw a good punch, still runs short on ideas. Straight from the start of the bout he was rushing in and reaching for takedowns, telegraphing his attempts and reducing his chances of getting in cleanly.

Mousasi returned to his low stance, which he tends to favor against wrestlers. What Mousasi does so well from here is place his hands into the “blind angle” underneath the opponent, and flick them up through the middle in upward jabs. It's a trick that Glory's Artem Levin is brilliant at.

What Munoz did well was after a failed shot moved as if to turtle as Mousasi came in on him, then re-shot from his knees. Something which wrestling coaches will repeat over and over is the importance of re-shooting, because there is no time when an opponent is thinking less about the danger shot than when he has just successfully defended one.

Munoz successfully got in on Mousasi's hips and lifted him off the mat, but as Munoz brought Mousasi down, Mousasi was almost able to turn it over into a mount.

This same threat became a reality later in the fight. After fighting off takedown attempts (and landing some shady downward elbows to the back of the head), Mousasi seemed largely in control. As Munoz attempted to take Mousasi down off of the fence, Mousasi rolled it over straight into mount.

This understanding of momentum is so beautiful to see and reminds me of Mousasi's old training partner and mentor, Fedor Emelianenko—likely the best all around heavyweight to date—and his incredible ability to turn exchanges from seemingly desperate positions into dominant ones. Here is Emelianenko reversing an Olympic gold medalist in judo, with judo. Seconds later, Fedor arm barred him.

Gegard Mousasi moved to the back and choked Mark Munoz out, reassuring everyone that he is, in fact, still a top middleweight. And this from a fighter whose consensus weakest area was in his wrestling game.

Pick up Jack Slack's new ebook, Fighting Karate at his blog, Fights Gone By. Jack can also be found on Facebook and Twitter.