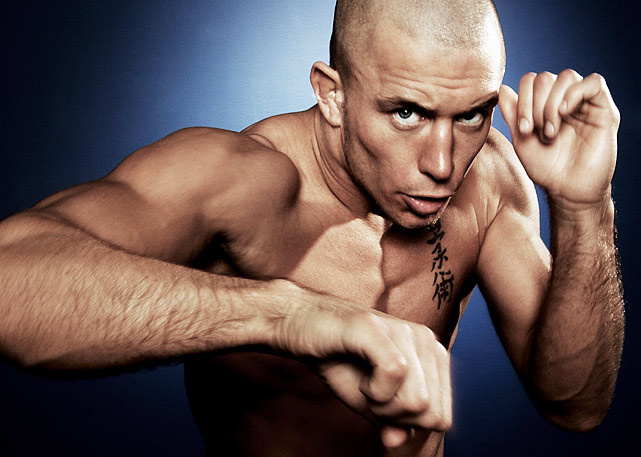 Excellence is something anyone can get behind. If a fighter starts tearing opponents up on the bottom end of the main card you will soon see a bandwagon appear full of folks touting that fighter as a future champion. Unfaltering, unwavering excellence, however, seems to serve as a lightning rod for criticism. To put it another way: more wins, more haters.

The common misconception is that St-Pierre fails to finish fights because he is a safe fighter. In terms of his style he is certainly not one to take any outlandish risks, but at the same time he is one of the most offensive fighters in MMA. There is rarely a moment in a St-Pierre fight when he isn’t jabbing, kicking, shooting, passing, or attempting one of these things.

Today we will examine some of the striking tools St-Pierre employs so effectively in his fights:

An Arsenal of Jabs

It would be ludicrous to write an overview of St-Pierre without including some information on this weapon. The frequency and potency of St-Pierre’s jab in his recent fights earns it top billing here.

The jab is a pretty simple weapon and anyone can learn to jab hard if they can learn to step in on their punch. It is the will-breaker, the face-sweller, and the table-setter for the big punches. A good jab at the right time can turn a tough-as-nails banger into a timid survivor better than any combination or set up can. Just ask Josh Koscheck, who came in to his rematch with St-Pierre thinking that he knew more than a little about throwing punches and ended the match reluctant to even come close to the champion.

The most important point I can give you about watching St-Pierre utilize his jab is that no two jabs are the same. It’s not a one-size-fits-all punch. There’s a good deal of trickery involved in St-Pierre’s jabbing game.

For instance, his most basic jab is that technique we all know from boxing, kickboxing, or karate. Springing off of the back foot, the body is turned into a more bladed stance and the lead hand connects as or just before the lead foot lands. This jab assures the most power and covers the most distance.

There are plenty of instances of St-Pierre nailing this full body jab, but he’s not fighting idiots. A professional fighter will be able to react almost every time they see him spring off of his back leg. It is the variations on this simple base that make St-Pierre so effective.

One method is to deliver a jab with staggered timing. This is hard to pick up in stills but if you review St-Pierre’s bouts with Jon Fitch and Josh Koscheck you should be able to pick it out by watching St-Pierre’s feet.

Rather than springing in with the jab, St-Pierre will perform the foot motion of springing in, planting his foot just inside of jabbing range, but he won’t initiate the upper body portion of the technique until his opponent has flinched at the spring in and is recovering to his normal guard.


St-Pierre plants his lead leg then jabs after Jon Fitch has reacted to the step.

By stepping and then jabbing, rather than co-ordinating the drive off of the back foot with the extension of the lead arm, St-Pierre loses the kinetic chain that creates great power in his lunging jab. But the beautiful thing about the jab is that it is not necessary to throw it with power on every punch. The motions are so similar in the eyes of an opponent that small, biting, staggering jabs serve to create confusion that allows the jabber to land the harder headache-makers.

St-Pierre excels in using the threat of his wrestling to out-box opponents. He'll take any chance to change levels and run through his opponents, and this allows him to create a double attack: two or more attacks that play off similar movements but exploit different openings.

Take a look at St-Pierre’s blowout of B.J. Penn in their second meeting. Notice how often he changed levels only to jab Penn in the gut. On almost any occasion that a fighter uses body jabs (most recently in Alexander Gustafsson’s boxing master class against Jon Jones) I am quick to congratulate and point to the successes it brought them.

We live in an age, particularly in MMA but even in some boxing gyms, where coaches and fighters do not give due respect to training counters, defence, and conditioning to deal with body jabs. It is seen as a nothing punch or a distraction, but the reactions Junior dos Santos can illicit from 260-pound opponents using just a couple of jabs to the solar plexus suggest otherwise. Boxing great “Sugar” Ray Robinson was a master of jabbing to the solar plexus and really threw his opponents off with it.

To return to the Penn-St-Pierre rematch, St-Pierre’s body jabs rapidly caused Penn’s hands to drop. Almost every time St-Pierre threw a body jab, he would immediately stand up into a jab to the face to stop Penn from coming in on him as he recovered.

A second technique of similar design was his choosing to step into a deep stance, as if he was about to crouch all the way in with a body jab or shot, and immediately driving up out of his crouch with a powerful jolt to the head--a perfect example of lesser leads setting up stronger ones. The kickboxer Artem Levin is also a master of this variation.

One of St-Pierre’s neater techniques, and one that has appeared since he began his work with boxing guru Freddie Roach, is his safety lead. This is a term coined by Edwin Haislet. You hear the expression “textbook boxing” thrown around a lot; Haislet wrote the textbook. In On Boxing Haislet discusses in detail the method of jabbing combined with a circling step to the left side.

This is a pretty advanced technique. Jabbing and circling into an opponent’s right hand is a great way to get yourself knocked out. Michael Bisping’s loss to Dan Henderson is a great example. It is a matter of subtleties that allowed Georges St-Pierre to circle into Josh Koscheck’s vaunted right hand all night without any repercussions.


St-Pierre jabs normally--notice the position of his left foot. He then performs a safety lead, jabbing as he circles to the left. Notice his new foot position.

As St-Pierre steps out to the left with his jab, he keeps his left shoulder extremely high. More importantly he dips his head slightly to his right side. By moving as much of “the good stuff” (his jaw line and temple) below the line of his shoulder, St-Pierre can keep himself safe in the event of his fouling up his timing and running into a right hand.

More importantly, St-Pierre stays alert. He knows the risks of stepping into his opponent’s power hand and he is ready to make a more severe duck below his shoulder if he needs to. Contrast that with Bisping’s lowered shoulder, more upright posture, and failure to react when a right hand did come in.

If it takes so much practice to master the safety lead, and if it requires running into the opponent’s most powerful punch, why bother?

For a start it places a fighter nicely off line from the opponent’s jab, which against a good boxer is like stepping off line in a fencing match. His jab will miss and yours will connect. Against any kind of fighter, it allows one to better target one eye and temple. Not coincidentally, the right eye of Josh Koscheck was battered and damaged and swollen shut after his fight with St-Pierre.

Additionally, stepping off line to the left can set up our next technique.

You thought this piece was going to be entirely gushing about how great St-Pierre is? Nope. His newly acquired jabbing skills have all but removed his ability to punch with authority from his right side. In fact, GSP has almost completely forgotten his right hand.


St-Pierre jabs off to his left, placing Koscheck on his right side. This shortens the path of St-Pierre’s right hand.

St-Pierre will very rarely throw a right straight at an opponent who is directly in front of him. Instead he will nail them when they move to about half past one. St-Pierre did it to Fitch routinely, against Koscheck, and even against Carlos Condit.

Shortening the path of the right straight is a brilliant way to hit an opponent with a punch he can’t see coming. A brilliant example from the annals of boxing history is when Ingemar Johansson knocked down Floyd Patterson in their first meeting in June 1959.

Notice how moving to Patterson’s left places Johansson’s right shoulder between his opponent’s shoulders, securing the shortest path. This is why even the slight angle created on a small step to the left can be considered a dominant angle.

On the subject of angles, it would be negligent to write so much about Georges St-Pierre’s game without considering the superman jab.

The superman jab is essentially a jumping switch of the legs with a left straight. St-Pierre sets it up through use of the lead inside low kick. After a few hacks at the inside of his opponent’s lead leg, St-Pierre will lift his left leg just a little, before jumping forward off of his right leg, dropping his left leg down behind him, and connecting a left straight.

Sound complicated? It is. And St-Pierre uses it all the time.


St-Pierre lifts his left leg to draw attention, before leaping forward off his right leg into a southpaw stance, combined with a hard left straight.

Once you get over the idea of it being a jumping technique, the superman jab is really just a shift. A shift is a punch thrown as you change stances. The advantages of the superman jab over the regular superman punch can only be understood when you realize that the change of stance is everything.

After his superman jab, St-Pierre is in a southpaw stance. Sometimes his lead foot will be outside his opponent’s, in a slight dominant angle. Other times it won’t, but as St-Pierre never follows up with another punch it doesn’t much matter.

What this technique does do is completely change the angles and positions that his kicks are coming from. St-Pierre will perform the superman jab and suddenly his favoured left leg is behind him, ready to swing through in a harder low kick than it would from an orthodox stance.

St-Pierre will also use the superman jab to step forward again and essentially run into a right low kick--a thing of beauty and a combination everyone should play with.

Despite the length of this article, this is only a very brief overview of some of the methods St-Pierre uses so effectively. We haven’t even looked at how he sets up or chains his takedowns. We haven’t even touched on his feints, which he uses routinely; his counter left hook which works marvellously; or his spinning kicks. And I’ll save the discussion about his ground game for next week, after his fight with Johnny Hendricks.

St-Pierre, to my mind, is the most well-rounded fighter ever to have competed in mixed martial arts, an honour I had previously reserved for the great Fedor Emelianenko. Don’t let the lack of finishes or the bitterness from various fan groups distract you. Whether GSP destroys Johnny Hendricks this weekend or loses by knockout, retires after the bout or goes on to fight five more times, there is a great deal more to say about perhaps the greatest champion the UFC has seen.