Jack Slack: How Prince Naseem Became the King of Boxing 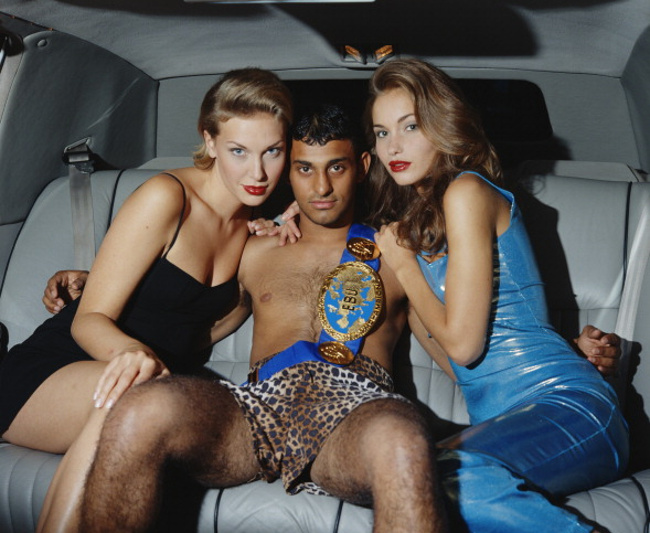 Earlier this month, Naseem Hamed was inducted into the International Boxing Hall of Fame. It marked a final point in the unusual and divisive career of Prince Naseem. There are educated fans who will swear until they are blue in the face that he was never that good, and there are others who consider him the most under-rated fighter in boxing history. My humble assessment is that Hamed was one of the greatest featherweights who ever lived.

I find that often the detractors base their argument against Hamed on his flaws as a textbook boxer. But that simply isn't how you should judge a fighter. It might surprise some to hear it, but if you held a boxing textbook up to the screen while you were watching Willie Pep or Sandy Saddler (who most will agree are all time greats in the same weight class as Hamed) you would not see much similarity.

Pep crossed his feet, bent at the waist, and when he wanted to actually punch, he had to get into southpaw stance first. Saddler barely boxed at all at range, he simply smothered punches and got in close to hit the body. Boxing isn't about flaws you can point out from a textbook, it's about hitting and not getting hit. To write Hamed off for his goofy, but spectacularly successful style, means writing off Pep and Saddler as scrubs as well.

No, when you reduce it to “hit and don't get hit”, Hamed was a virtuoso boxer. The product of Brendan Ingle's bizarre system of switch-hitting, perhaps the finest performance of Hamed's complete game came when he won his first title by taking the WBO featherweight strap from Steve Robinson.

Steve Robinson was not a bad boxer by any means, this was his eighth title defence, and he knew what Hamed wanted to do. Much of Hamed's game was about slapping the gloves and face of his opponent with backhanded southpaw jabs. Often Hamed would simply slap at the gloves from way out of range, making a scene of sloppily dropping his hand after each jab.

When his opponent fired back at him, Hamed would swing the dropped right hand around, leaning back at the waist, and look to take the opponent's head off with a southpaw lead hook. There's a tendency to get hung up on Hamed's uppercut and left straight, but the short counter right hook was where Hamed did much of his damage in the ring. It was the threat of this counter that turned forty-punch-a-round boxers into ten-punch-a-round boxers against Hamed. But Robinson was well prepared, and his left hand was always snapped straight back to his head after he jabbed.

In his anxiety to not give up an opening for the counter right hook, Robinson's left hand was almost always pinned to his head. With his ear muffs on, Robinson was exposed to that cracking punch—the southpaw right hook to the body. It just isn't there all that often, but for a right-handed southpaw like Hamed, it's a terrific power punch. If an opponent turns a little too side on in his stance, the punch can catch the kidney pretty nicely too and will normally fly under the referee's radar.

One criticism that you could certainly level at Hamed throughout his career was that he didn't take his punching power to his opponent's body all that often. His frequent body work, when so often he was an over excited headhunter, is another reason to consider this bout with Robinson his most complete work.

This southpaw right hook to the body paired nicely with Hamed's usual hops to angles. Here's a nice instance where Hamed hooks the body, angles out and assumes an orthodox stance momentarily, ready to come back in.

One of the most unusual moments of the fight came as Hamed, seeing that Robinson would not open up for him, decided to stand with his feet level and his hips square. Brendan Ingle has remarked in interviews that he teaches five ways to fight, orthodox and southpaw, both traditionally and more side on, and then completely square. You won't see this all that often because it's so ineffectual for creating power and it presents such a large target, but Hamed used it excellently to draw an attack from Robinson.

While this stance undermines all of the great Jack Dempsey's points about generating punching power through the transfer of bodyweight, it does demonstrate a principle which Gene Tunney spoke about in his A Man Must Fight. Tunney used to fight more square on than most fighters (though not with his feet level) and punch with short, piston like arm movements. His punches were “impure”, lacking power, but they got to the mark quicker. Tunney believed it was these shorter, weaker punches that won him the fight against Dempsey.

As the fight progressed, Robinson was reduced to simply covering up, and that opened the door for Hamed's usual antics. The classic Hamed lead uppercut was on full display. In amateur boxing, dipping the head below the belt line is illegal, in professional boxing it isn't... but then why would you bother? For Hamed it became a set up. Bringing his head low, Hamed would weave back and forth below his opponent's vision and come up to the side with a lead uppercut. The number of opponents Hamed hurt with this boggles the mind.

Those of you who read my articles regularly will know that Hamed's corkscrew uppercut was combined with a hop to the right to line up his left shoulder with the opponent's centerline, shortening the path of the left straight which followed. In the instance above, Hamed angled to land a short left hook, something he also did regularly.

The corkscrew uppercut raising the head, as Hamed jumps out to his right.

Another angle, showing Hamed's footwork. Notice how Hamed's lead foot hops outside of his opponent's, and his left shoulder is lined up perfectly to punch.

By the end of the seventh round, Hamed was plastering Robinson in heavy shots, and Robinson couldn't hit anything. Hamed's bizarre limbo-like head movement (which often left him off balance when he was hit) clearly frustrated Robinson, who at times settled for pumping his hands towards Hamed's chest.

In the eighth, Hamed came out conservatively and switched to orthdox stance, as he was wont to do. Robinson hung his right hand out a little too long and suddenly Hamed was on him. Hamed's leaps across the floor could put him in trouble—as when he lazily and repeatedly leapt at Barrera—but sprinkled in through a solid boxing performance, they were lethal. In a split second Hamed went from on the end of Robinson's reach to right up on top of him. Robinson had weathered punches like this one throughout the fight, but this one caught him out. Robinson stumbled, fell, and the fight was waved off.

Hamed wasn't around the fight game too much longer, but this might have been the performance that best captured what made him great. A falling out with Brendan Ingle, a loss of motivation, a move to a more orthodox coach who didn't understand him—in the late, great Emmanuel Steward—and coming to rely on his power alone were ultimately what did the Prince in. But you'd have be really set in your ways to ignore all of Hamed's success in the ring just because it didn't look like what you're used to.

Jack Slack: Badr Hari and the Specter of the Red Scorpion