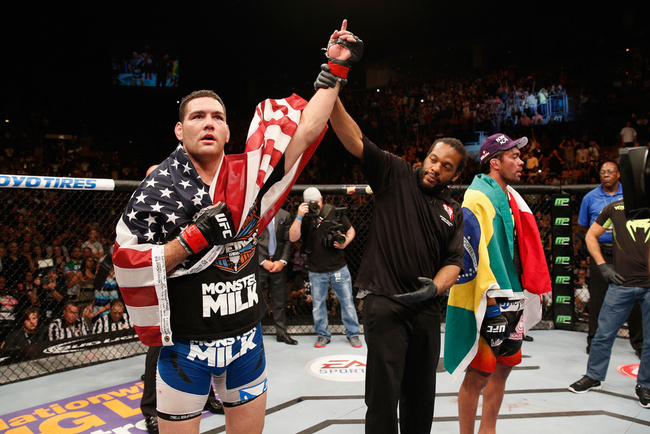 If I didn't believe that pound-for-pound is an overused and poorly understood concept, I would be happy to argue the case for Chris Weidman being one of the finest fighters at any weight on the planet.

It was a decent night of fights overall—Urijah Faber remained undefeated in the UFC against people without championship belts as he submitted Alex Caceres, Rob Fent showed that the tall man will always be vulnerable to the overhand as he put away George Roop in 2:19, and Ronda Rousey predictably beat Alexis Davis.

But let's not talk about any of that because it all paled in comparison to the main event!

If you have been reading my articles on Lyoto Machida, you will remember that Machida's style is always about forcing that second step and creating the collision. If he can get an opponent to overcommit—step in twice, expecting him to run, and then meet them, he can generate terrific, fight-ending force.

In truth, this is the first time we have seen Machida in with a gifted ring cutter. Seems weird right? Well, frankly there just aren't many good ones out there in MMA right now. Weidman took it one step at a time, staying over his hips and ready to move if something came back at him, just as we discussed last week. He moved Machida to the fence, over and over, and Machida spent large portions of the fight attempting to confuse Weidman with what direction he intended to circle out.

It's great to do this kind of direction switching along the fence, and the sign of a good understanding of ringcraft, but if it is all you are doing, you are fighting a defensive fight and not scoring any points on the cards.

Great example of getting off the fence, but an awful lot of movement to score no meaningful strikes.

Most of the time Machida would attempt to control the lead hand as he circled out. That great favourite of Giorgio Petrosyan, the pivot master.

Pressure is a very real force in a fight. If you are near the ropes or fence, waiting to counter, the stakes suddenly get a lot higher than if you were striking out in the open. Machida was reluctant to step in with his counters, he wasn't really given the opportunity to all that often, and when he did, he often missed.

The other great danger is that you cannot kick well while on the back foot. Kicking requires a transition of weight forwards, into the target, and places you on one leg. We mentioned this last week with a couple of clips from the Quinton Jackson bout. If you do all of that near the fence, while the opponent is coming forward, you are playing with fire. When Machida did kick while Weidman was pressuring him, the kick would land, but Machida would be fighting off a deep takedown and wound up exerting a great deal of his energy.

Weidman used kicks liberally throughout the bout, presumably because of the success others have had with low kicks against Machida, but also Weidman feinted kicks well and stepped in behind them.

The Chris feints a kick to get Machida to the fence, circles along the fence with Machida, and chops at the trailing leg.

When Weidman did step it up in the third round, and actually attempt takedowns, he had great success. I previously stated that there simply isn't enough footage of Weidman, but the more I see of him the more I pick up on the little signatures he leaves in exchanges. This double right hand (remember that?) into a takedown as they hit the fence is a beaut.

I won't go into great detail on the ground exchanges, we've got enough to get through already, but Weidman stuffed a single butterfly hook into that “lockdown” position we spoke about last week, and attempted to stand for a knee cut pass.

The Problem with Pressure

Being on the back foot is hard, but pressure fighting brings its own set of disadvantages. You have to be on a hair trigger all the time so that you don't 1) lose the opponent and let them off the hook, 2) end up chasing, or 3) eat unnecessary strikes. Moving towards the fence over and over is easy, but doing it while being cognisant of the other guy waiting to take your head off is a slog.

By round four, Weidman had eaten a few kicks, and had been moving forward for 15 minutes, and for a moment he let his foot off the gas. If you were just watching the two of them, you wouldn't notice, but factor in the cage position and you'd realize that the same fight was happening, but out in the open. There was no cage to Machida's back, there was nothing to punish him for missing strikes and there was plenty of room for him to move.

It was in this round which Machida landed his usual counters with great accuracy.

Notice the cage position, the lack of pressure, and the freedom of movement which Machida has.

After ringing Weidman's bell with a couple of left hands, Machida landed more body kicks as he moved Weidman to the fence for the first time. What you will have noticed throughout the bout is that both men were throwing many snap kicks with the ball of the foot (koshi in Japanese) to the body.

I've been saying these are the future since Katsunori Kikuno fought Eddie Alvarez to a stalemate on the feet years ago. Now guys like Yancy Medeiros, Kyoji Horiguchi, James Kraus and a ton of others are throwing them consistently and they are winding opponents who just don't expect it.

After a moment of success on the buzzer in the fourth, Machida suddenly realized that he could step in through the wake of Weidman's kicks, just as Weidman had been doing to shoot takedowns on Machida. The next four or five times Weidman kicked, he was hammered with counter punches.

What happened next was fascinating. For the second time this year, in a title fight, both fighters went to the hand fight. This so rarely happens in other fights, but in both Robbie Lawler versus Johny Hendricks, and Lyoto Machida versus Chris Weidman, we have seen extensive work at trapping range.

When both men can wrestle, and strike, and use hand traps well, the hand fight becomes a far more important place. Both men did decent work out of it, and worked in for collar ties and knees, but Weidman capped off his performance by wobbling Machida with that same brilliant elbow he used to knock out Mark Munoz.

Weidman picked up a hard fought decision through his excellent footwork, his tremendous pressure and his undeniably sturdy jawline. Machida put up a cracking performance and it is hard to see him not fighting his way back to another title shot on that form, though he will need to make serious amendments to his game to prevent Weidman from walking him down for three rounds again.

Weidman versus Machida: The Illusion of Speed