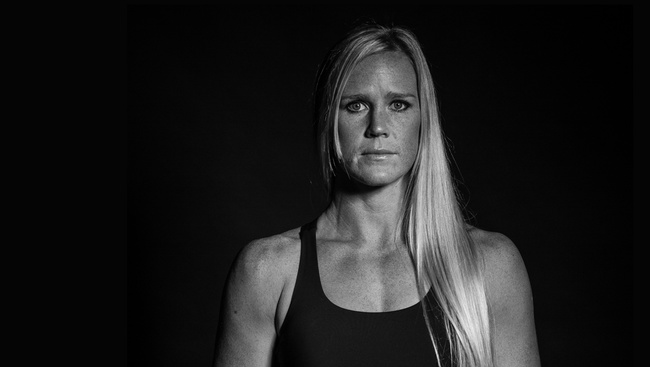 Photo by Will Fox/Zuffa LLC

I feel the same way about Holly Holm's MMA career that I did about Eric 'Butterbean' Esch's boxing one. I have enjoyed her body of work tremendously, and she's clearly getting better, but I recognize that in mixed martial arts she's fought a whole lot of folks who don't even have Wikipedia pages.

Though I'll grant, she's a lot easier on the eye.

Now I would stress that MMA, being as young as it is, is not a sport where you need to prove yourself against top competition consistently. Chris Weidman and Alexander Gustafsson were both bumped into title shots with maybe one notable win a piece, and the latter gave Jon Jones a hellacious scrap, while the former finished Anderson Silva twice with no trouble. Ronda Rousey herself got a shot at the Strikeforce strap after her fourth win, over a 2-1 opponent, and look at her now.

This is not a business which has particularly clear avenues toward that title shot, and often the guys who come out of nowhere pose more of a threat than the guys who have shown all they've got on TV half a dozen times. Certainly with Ronda Rousey we're getting to the point where the UFC is struggling to find warm bodies for her to armbar—and that is exactly how the two aforementioned surprises came about.

So, could Holly Holm knock out Ronda Rousey? You're damn right she could. Could she fall flat against Raquel Pennington? Absolutely. Are the two mutually exclusive? Of course not, you should know better than that by now.

Whatever the case, she's got the sharpest striking I've ever seen in women's MMA, and I believe that the squared circle had been shackling a great many of her abilities. Let's ruminate on her a while.

Breaking the Shackles of Boxing

Now women's boxing gets a bad press, and is on the butt of a great many jokes. One of the common ones about Holm is whether world titles which are only fought for in Alberquerque are actually world titles. But whether you find that funny or not, Holm beat the vast majority of women put in front of her, belts or no belts. And becoming Ring Magazine's Female Fighter of the Year two years running is certainly not easy.

There's a lot of talk about “fighters” versus “athletes”, but if I were to point at anyone in WMMA and say “that's an athlete” it would be Holm. Through her boxing career her pace was ludicrous. Far from orthodox in her boxing style, she used a tremendous amount of energy springing around the ring from one set of ropes to the other, but still fought better in the last rounds than many of her opponents. And of course, if you fight exclusively in New Mexico, why try to put the pace on the opponent? Altitude is a killer.

Holm has always done an awful lot of walking with her punches. Left hand and right foot, then right hand and left foot, etc. There's two schools of thought on punching footwork, one has you always pushing off of the same side as the punch and stepping with the opposite foot—generating the most torque—and the other gives more considerations to maintaining stance.

Notice Holm's left foot pulls up so far that she is in fact not in her stance but has her feet level. Bad classical textbook boxing, good for actually covering ground with your blows. Also notice the least subtle head butt in the world from her opponent. Learned that one from Fireman Jim Flynn.

Classical footwork is to extend the stance with the first blow, usually the jab, then return to the original length stance with the rear hand, ready to spring forward again if the opponent has retreated. The key point is that classical method stresses the importance of at no point abandoning the stance as Holm does in the above gifs. But Holm, in the boxing ring, had footwork as crazy as a stoat's.

The thing is, in mixed martial arts bouts are almost always fought at a much greater distance than in boxing. Kicks are a consideration, but also many fighters will back straight up as soon as they see their opponent start firing. Holm's stepping punches have made her quite at home in mixed martial arts—just as they did for Fedor Emelianenko, Igor Vovchanchyn and numerous others.

Why do I say Holm was shackled by boxing? Well, her coach is, and always has been Mike Winkeljohn. She went to him to learn to kickbox, and found success as a boxer. She's been training with quality kickboxers and mixed martial artists in the gym for years and never had chance to show it. Two things slowed Holm down in the ring—the lack of kicks, and the corners.

In terms of corners, Holm's style in the boxing ring was extremely mobile, but she could get stuck in corners at times. In her later fights Holm got a lot better with her ringcraft and was able to dodge herself out of corners and away from the ropes.

But in MMA? No concern at all. She can skate around the mat for as long as she wants and her opponent has to come and get her. Against Nikki Knudsen, Holm boxed on the counter for a bit and it was marvelous to watch. You could tell that Knudsen had been taught to the left against the southpaw Holm, but Holm began the fight by skipping around to her own left. Knudsen followed, triple jabbing at the air and trying to hand fight with a hand which wasn't there.

Circling to her left and coming back in with beautiful left straights, the technique which Willie Pep used so effectively. In fact, most watch Pep's fights and see a master boxer, but miss the fact that he does most of his best outfighting with southpaw left straights.

While Holm has ended up in a fair few clinches in her short MMA career, they have almost always been on her own terms. They say that coming in with limited grappling experience is a tremendous disadvantage in MMA—and it is—but shortcomings in wrestling can be made up for in great ringcraft in mixed martial arts. Anderson Silva (yes, we're still allowed to talk about how great he was) beat plenty of stronger grapplers, but barely ever wrestled. He simply denied them the opportunity with his cage circling.

If the guy you're fighting is a terrific ring cutter, yeah he's going to get you. But if there's one thing we all know about Ronda Rousey, it's that she loves to rush in with her head upright and no consideration for what's coming back.

Holm's counter left straight is simply marvellous, and it might be the best strike in WMMA now that Gina Carano's right hand is never coming back.

But what I've really enjoyed about Holm's step away from the boxing ring is her kicking game. In seven fights it's become one of the best in WMMA. Tied with maybe Tecia Torres when she remembers to kick.

And it all comes off of that little bump off to the right. Standard southpaw strategy, but Holm's three main options from there cook up a storm. I'll sum them up with one gif, from her fight with Angela Hayes, the only Holm opponent to make it the distance, but who got picked apart in the process.

Holm steps out to the slight angle outside Hayes' lead foot, and chops in a right low kick. Then she does the same step off, but follows with a left kick to the liver. She returns to the initial low kick, then gets off line and high kicks.

And this is what three round fights do for someone who is used to boxing for ten. Combined with the enormous cage, Holm takes her time to work, to set things up, and to build from the ground up. She plants expectations in her opponent's mind, then kicks them in the face.

That same liver kick snuck under Jan Finney's arm as Finney attempted to punch, and sent her to the mat.

Right hand extends, left shin slams into the exposed ribcage. Exactly what we were talking about with Brandon Thatch, Donald Cerrone and Badr Hari the other day. The best time to hit the body is when the opponent is punching.

And lately she's been adding the lead leg side kick to her game. A brilliant technique for southpaws, an even better technique for a boxer. The jab into lead side kick, or feinted jab into lead side kick, was the money-maker for Bill 'Superfoot' Wallace. Wallace will often recount himself that though the round kick is his favorite technique, he achieved most of his knockouts out with the side kick underneath his jab. It simply hides the kick so well.

In her most recent MMA match, Holm also introduced the low side kick which Jon Jones uses so effectively to keep opponents off of him. She looked a little rough around the edges with it, and it kept glancing off and leaving her exposed, but if she can develop that into an accurate attack, she can further slow the opponents who want to clinch her and encourage bum rushes onto her counter left.

So why is Holm such a knockout kicker?

This is someone who has been springing in with punches and being ready to rush out on an angle all her life. Allow her to throw the kick up when she exits and she starts catching opponents flush. As Remy Bonjansky and others will often point out, a leg weighs a great deal, doesn't matter if it slaps into someone's face or exposed rib, or crashes into it, you've got a good chance of knocking them out anyway.

Here's the same long right hook she used throughout her boxing career, and where she'd circle off in the ring, she chucks up an effortless high kick. No harm if it's blocked, but its not and down her opponent goes.

Holly Holm has a great many questions being asked of her, and that's exactly the way it should be. Fight fans should always be cautious of the hype being poured down their throats, but Holm, more than most, can back it up. The level of the competition has not been there, but the quality of her work, has been superb. There are things that Holm is doing which top five fighters in each men's division could sit down and learn a good deal from.

Whether she falls at the next hurdle, or gets all the way to Rousey, she's someone you should be watching for her craft above all else. If she can provide Ronda Rousey with the first real challenge of her career it's a bonus.