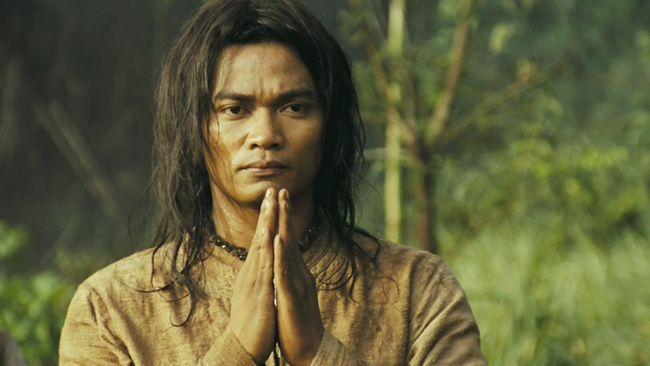 Ong Bak is perhaps the finest martial arts movie of this generation. When the popularity of Crouching Tiger, Hidden Dragon had Eastern cinema spiralling off into a blur of uninteresting, floaty wire work and swordplay, Ong Bak reminded us of what martial arts movies are supposed to be all about. Talent centric, bone-on-bone action.

Ong Bak boasted absolutely no wire work and promised to make a star of its lead, Tony Jaa. Jaa was a publicist's dream: a gymnast, an actor, and an incredible martial artist. Not only that, he would actually perform the stunts from his movies at their first screenings. He seemed born to be a star.

While Ong Bak contains no harness work, it is known for its flamboyant gymnastics and free running sequences between brutal Muay Thai fights. The plot isn't worth two cents, and the situations feel contrived—such as the chase scene through a market place, wherein men carry panes of glass and hoops of barbed wire across the street just in time for Jaa to leap over or through them—but the action is breath-taking.

In this movie of throwing men through second floor windows and jumping out with them just to land an extra flying knee, you would be surprised at just how much of what Jaa did has appeared in real world fights since. Often between world class professionals. So, without further ado, allow me to list some off and make you say “I can't believe that actually happened...”

Let's begin with the first real action of the film. Jaa's yokel character somehow bumbles his way into the middle of a fight club in Bangkok. As the opposing fighter rushes him, Jaa ducks his head almost to the floor and brings a knee up on an arc most of us wince at just watching.

It's not the only time he does it either. In this instance you can see him duck all the way down to lean on the floor.

This is an application of a traditional Muay Boran technique. Muay Boran predates the sport of Muay Thai, but is part of the same fighting tradition.

Chinese martial arts tend to be remarkably poetic in naming their techniques, presumably to keep them secret. For instance, ducking down and grabbing a hold of your attacker's crown jewels becomes Monkey Steals a Peach.

Thank god they used a mysterious name. If knowledge of this got out, everyone would be doing it!

Where in Japanese martial arts the names are dull, precise and particular. Gyaku-ude-garami for instance is “reverse arm entanglement”, the famous kimura hold. Traditional Thai martial arts seem to strike a nice middle ground, evoking Buddhist or Hindu symbolism while still describing the technique in a roundabout way. Hanuman (the monkey king) Presents the Ring, for instance, is a double uppercut. The same thing in karate is morote age-zuki or two hands rising thrust.

Jaa's head-to-the-floor knee is an old Thai techninque called Push the Elephant.  Ducking down low and bringing the knee overhead. The optional pushing on the opponent's rear leg as you do so—to jam his kicking ability and perhaps stoop him forward—is where the technique seems to get its name.

Slick right? But the overhead knee doesn't seem very practical. It requires great flexibility and hardly seems like a guaranteed connection. But the same principle was applied in a televised mixed martial arts match by that master entertainer, Anthony “Showtime” Pettis. In his bout with Shane Roller, Pettis ducked low, slipping inside of a punch, and used that same overhead knee motion, instead throwing a high kick down onto the back of Roller's neck to put him on wobbly legs. The Uppercut Back Elbow

This technique seemed like a pretty inconsequential moment in the film. Certainly, most folks weren't walking at the end of the film and saying “that back elbow though...”

Most people aren't Anderson Silva though.

Silva saw Ong Bak at a low point in his life. He'd been dismissed from PRIDE FC, the biggest MMA organization on the planet, while his team mates were still mopping up there. Silva was an also-ran, nothing special, but he took some fights in the British promotion Cage Rage (which was so seedy that it looked like you could catch Hepatitis from the seats) and got some momentum, but threw it away with an illegal upkick against Yushin Okami, getting himself disqualified.

Coming off of the loss to Okami, Silva was convinced he saw something in this elbow. His coaches didn't believe him, but Silva stuck at it. He even had his wife holding a couch cushion for target practice. In his next bout, Silva came out, checked Tony Fryklund's lead hand, and brought the elbow straight up between Fryklund's forearms. Fryklund went down instantly, the right side of his body temporarily paralyzed, it was astonishing.

Silva was immediately signed to the UFC off of this fight, and the rest is history—Silva went on to become one of the most dominant champions in MMA history.

A common feature of martial arts films now, which really found popularity after Ong Bak, is the climbing elbow. This, again, is some old school Muay Boran stuff. You've seen it before I'm sure, you run up the opponent (who is conveniently standing in a nice low, strong, sturdy stance, and start elbowing him in the top of the head. Jaa's double elbow on “Big Bear” in Ong Bak is one of the most memorable moves of the film.

But it's do-able. Saenchai, sometimes known as the god of Muay Thai, regularly takes on opponents with up to fifteen pounds of weight on him, and will often attempt to climb up them. He does this seemingly out of wanting to have some fun, which is commendable, if a little reckless in a full contact fight.

In Muay Thai though, the opponent will normally freak out before you start dropping elbows. All it takes is a little movement and you're back on the ground again. In MMA though, Demetrious Johnson performed the same climbing elbows against the fence. Johnson is probably the most under-rated fighter in the world right now simply because he is only 125lbs.

If they look a little sloppy it's because 12-6 elbows are expressly forbidden in mixed martial arts, so Johnson had to make sure they came in slappy and from an angle.

Okay, so this is where things get stupid. The scorpion kick is that flick across the back to hit someone in the face as they go past you. Bruce Lee did it in enter the dragon with his opponent in a front headlock. In Ong Bak, Jaa is working his way through the array of nasty racial stereotypes at the fight club when he is confronted with the ultra fast Japanese kicker, Toshiro.

Toshiro is able to slip all of Jaa's punches, but Jaa catches him slipping past a punch by whipping up the scorpion kick.

Now you're saying “no way... this can't have happened in the real world”. Well, prepare to be amazed, it did.

The Azerbaijani karateka, Rafael Aghayev is the consensus best in the world. Against Koh Matsuhisa, Aghayev was looking to do his usual move in, duck and hip throw business. But as Aghayev closed in to throw Matsuhisa, the Japanese fighter unleashed one of the sharpest, fastest kicks I have ever seen!

I jest, that was a sloppy mess. The saddest part is that Matsuhisa got the points out of it and is now starring in an instructional DVD which plays up this spasmodic mess as a calculated Matsuhisa special technique. But that's competition karate, largely just playing tag in pajamas.

The truth is that there is a limit on what you can apply in the real world—we have to draw the limit somewhere. There are simply so few advantages to kicking across your back like that. You have to move past the opponent to do it in the first place, essentially giving him your back and a blind angle. We have to admit that some things are only for the movies, because to be honest I cannot see a situation where this kick would actually be useful...