Jack Slack: Reflections on Silva/Weidman I 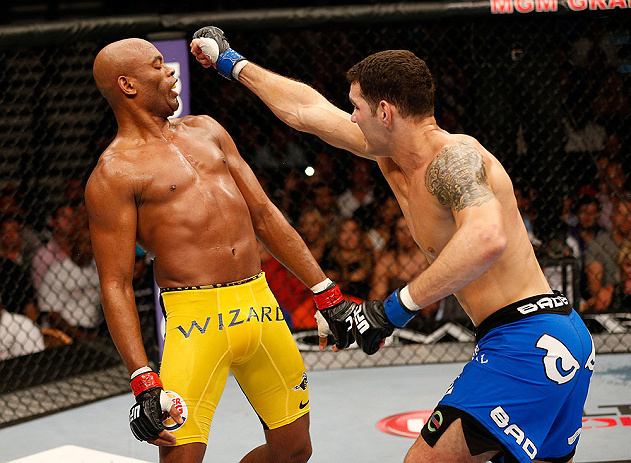 Tomorrow night at UFC 168 Anderson Silva and Chris Weidman will meet for a second time to decide who the best middleweight in the world is. No match this year has taken on quite so much significance to quite so many people and for quite so many different reasons. To some the rematch is a chance for Silva to prove that Weidman got lucky when he knocked him out in their first fight, or that Silva threw away the first fight with a reckless strategy. To others it's a chance for Weidman to prove he’s the real deal.

Without meaning to sound preachy, a fight, like anything, is more complex than it appears on the surface. There is so much entering the arena withtwo fighters that it can never be reduced entirely to the simplicity of the physical, the mental, or the technical. But what we will do today is just that: review the first bout and the stylistic match-up between the two men.

“That Backfist” and the Pull

I received a good deal of attention after the first Silva-Weidman fight because I had written a piece the week before the fight titled Killing the King: Anderson Silva in which I described Silva's habit of rolling with punches and pulling away from punches, both of which are reactionary movements and can be stifled with feints and double ups. I argued the importance for Weidman of doubling up on punches from one side and creating a situation where it would not be safe for Silva to simply react to expected punches. Sure enough, in the fight's crucial moment, it was Weidman's doubled right hand that had Silva leaning back with nowhere to go before that left hook sailed in and knocked out the middleweight great.

I enjoyed the attention, but to pretend that the doubling up of Weidman's right hand alone won him the fight would be daft. Yes, Silva pulled his head back in anticipation of the jab/right straight/left hook combination that every MMA fighter has thrown at him for the last 10 years. But there was a whole lot more going on leading up to that moment. Even in the moments immediately preceding the knockout, Silva got hit with a left while he was switching stances in range of Weidman (generally a taboo). He then brought his feet level to play off the punch, acting out as he so often does..

Why Silva Acts Out

Mike Tyson said it best when he remarked that tough guys don't last long in combat sports; smart guys do. Anderson Silva is not, as he is made out to be, a man who lacks intelligence or mental discipline. He is instead a man who acts out (or plays around) to create openings, to steal rounds, or to hide inactivity. And he does this by dancing, moving his head, dropping his hands, and daring his opponents to attack.

The most famous examples of this came during his fights against Forrest Griffin, Thales Leites, and Demian Maia. Against Griffin and Leites Silva was simply attempting to draw them out without committing himself. It worked like a treat against Griffin because Griffin was willing to engage the Brazilian, but Leites was not keen on doing anything.

Against Chris Weidman, Silva had lost the first round fairly convincingly. He had been taken down, attacked with submissions, and hit with a few hard punches. Silva's antics--his dancing, his shouting, his clowing--were an attempt to put himself over to the judges and to draw Weidman out of his shell, not proof of him underestimating his challenger.

Which means Weidman's knockout of Silva was the product of circumstance. Were Silva not acting as he did, there is little question that Weidman would have struggled to catch Silva so far out of position. Weidman had, however, shut Silva's counter game down well throughout the fight. He did this by first creating uncertainty with his attacks and then correcting the distance between himself and Silva between engagements.

Uncertainty in the Fight Game

The importance of hiding one’s intentions in a fight is no secret, yet when confronted with a dynamite counter puncher (and Silva is among the best in MMA) even experienced fighters can get drawn out. They become reluctant to lead, which kills a fighter's chances. When you go on the offensive only two or three times during a round, you have to go all in on each attack to make them count, and that is exactly what a counter striker wants.

We spoke last week about Silva's ability to draw his opponents in to be countered. Whether it was Forrest Griffin, Chris Leben, or Dan Henderson, they all bum rushed the Spider at some point becuase the Spider seduced them into it. .

With many of Silva's opponents one can almost sense them bolstering their courage for a big push just before they step in and Silva douses their lights. It doesn't matter what fighting discipline you come from, or indeed what sport you are competing in, smoke and mirrors is the name of the game. If every time you step in you throw yourself into a committed attack, a good counter fighter will be able to tell what you're going to do before you even do it.

Take a look at poor old Yushin Okami. When he fought Silva in 2011, every single time his front foot moved, he threw a jab. Not only that; he didn't have a left hand or a right hook for variety, just the jab. He never feinted or faked; he just came forward, throwing fully committed jabs. If you attack every time you move, you make a counter striker like Silva's life very easy indeed. Silva could have closed his eyes as soon as he saw Okami's lead foot move, and his counter would have worked just the same.

What Chris Weidman did so well to combat this tendency was to constantly be in motion, to throw feints and noncommittal shots in between his genuine attacks. He flicked out jabs without lunging in wildly, he shot in for half-effort takedowns just to keep Silva's hands down, and each time Silva mugged at him, he managed to at least flick off a glancing blow without giving Silva anything to fire back at.

Weidman created an environment where it was very hard for Silva to pick his counters, and that is really the only way to survive against a stellar counter puncher, aside from simply doing nothing and getting humiliated.

Weidman's constant flicking attacks allowed him to set up heavier strikes, which we don't normally see land on Anderson Silva. For instance, the straight right hand Weidman used in round one: Weidman pulled his jab short as Silva backed away, and Silva thought that Weidman was still refusing to give chase, so he relaxed, hands down. Weidman sprang in with a right straight a beat later. Lovely stuff. Not elite boxing, but simple psychology, and that is often the most effective strategy against a confident counter puncher.

The second thing Weidman did so well to shut down Silva's game was to re-establish distance correctly every time Silva moved. There was no running wildly after Silva, or exposing himself; he just reset the positions each time Silva inched away. Half of Silva's game is to force opponents to reach for him. There are many fighters who got their opponents to reach for them and fall short and who then countered over the top. Muhammad Ali and Prince Naseem are great examples. If you can draw a fighter into overextending he is a sitting duck.

What Silva will also do is create a false sense of distance by keeping himself far enough from the opponent that he is effectively safe and then lean forward at the waist to appear closer than he actually is. Roy Jones Jr. was a master of this particular trick; any time an opponent lunged for him they either found Jones was nowhere near as close as they had thought, or they wound up on their knees, floored off of a counter hook.

Here's a nice instance of Roy Jones starting from distance but bending towards his opponent with his head straight over his lead knee. As Jones' opponent comes in, Jones pulls back, creating more space. The opponent lunges in and over commits, leaving him in perfect countering range.

By constantly correcting the distance and refusing to reach out over the fake distance Silva presented, Weidman avoided having to overextend and simultaneously removed Silva's first, and most important, line of defence.

Here Silva attempts to draw Weidman into lunging but instead eats a flicking jab while Weidman offers him very little to fire at.

And here is a nice example of why Weidman's refusal to overcommit was so integral to his success. Silva draws him forward and Weidman opens up with multiple punches. Yet when Silva fires back, Weidman is still in position, on top of his hips and feet, and ready to move away.

Just look at the difference between Weidman, who flicks his jab out without committing himself then steps in behind it, and Forest Griffin, who simply bum rushes.

Notice how Weidman is always in position to deal with the threat of a counter attack, where Griffin constantly runs onto them.

Would Silva Have Caught Weidman in the End?

Silva's strength in the Octagon has been his use of distance, his low hands to prevent takedowns, and his ability to convince opponents to overextend. Now, assuming his style remains that of the brilliant, baiting counter fighter, will Silva be able to pull it off tomorrow night? Or put anther way: How close was Silva to getting Weidman riled up before the knockout last time?

For all of Weidman's discipline throughout the first fight, there is no denying that the combo that knocked out Anderson Silva was sloppy and wild. In fact, Weidman actually chased Silva with the finishing combination, something he was not supposed to do, and was pretty clearly reaching wildly for the champion with the right backfist. Notice how his head comes well forward of his hips and his chin is exposed. Nothing like the upright, pressuring style he had employed so successfully up to that point.

If Silva hadn't still been trying to convince Weidman to open up with his mischief, and had instead been set to move his feet and counter, could he have caught Weidman and turned the fight around? Maybe we'll find out tomorrow night.