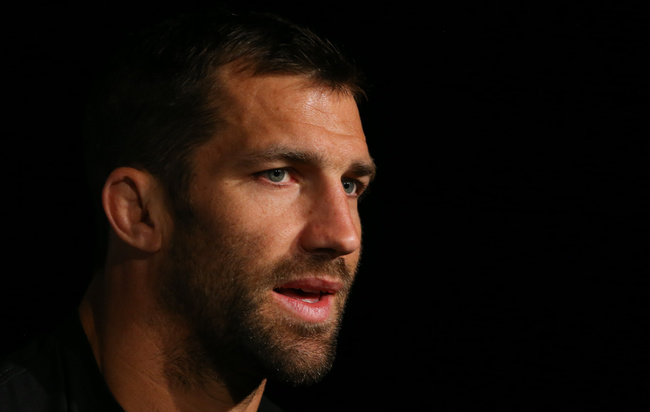 Often when I write about how fantastic an upcoming card is looking the event fails to live up to my expectations. UFC on Fox: Machida versus Rockhold was every bit as great as I hoped and, better yet, there were a hundred moments where technique or strategy made the difference. A perfect night of fights in my eyes.

Much has been made of the main event, with many speculating that the loser of the bout, Lyoto Machida must have come in injured or had a devastating weight cut. I cannot comment with any authority on that, but I will say that the way he got dropped would have happened to the best Lyoto Machida.

Earlier in the week we discussed the competition style of karate which Machida uses—it was one of my best, so check it out—but one of the characteristics of karate is lunging in with straight punch flurries, with no regard for punches coming from the side. The non-punching hand is always low, and this is a bad habit which Lyoto has carried into MMA. It means that when he runs in, he can get chin checked with hooks from his sides.

On Friday, when we looked at the stylistic match-up, we discussed Rockhold's counter right hook. As Machida lunged in, Rockhold's forearm clipped him over the back of the head and it threw Machida to the ground.

That was where Machida stayed for the rest of the round, and he took a pasting. Just as in the Jon Jones bout, when Machida returned to the feet—at the start of round two—he looked nothing like his usual self. He'd been beaten to sluggishness. Machida was desperately stepping in with punches when Rockhold kicked but the quickness was gone and his timing was off as he wobbled around the cage.

Rockhold manhandled him to the ground with ease and after a short struggle, Rockhold locked in the rear naked choke. It was an excellent showing from Rockhold—both as a crushing ground fighter and in his moment as a counter puncher, and demonstrated the flaws which still exist in Machida, even as a martial artist who recognizably grows with each performance.

In terms of growth, one of the finest showings of the night came from young Max Holloway. I have had my eye on Holloway for a long time. His boxing can be beautiful, he was throwing left hooks to the body straight off of the jab against Dennis Bermudez and it was beautiful to watch. He has, however, always had something of an immature attitude. He was the kind of guy who thought “putting on a show” meant leaping in with missed flying knees over and over.

Perhaps Holloway is now realizing that having some of the prettiest and most varied combinations in the division is more than enough of a show. You can see all the flying knees you want on regional shows, it's only in the big leagues that you'll see guys kickboxing like Holloway did last night.

Using his reach wonderfully, Holloway picked Cub Swanson apart. Swanson, meanwhile, looked just as one note as his moments on the feet against Frankie Edgar. One swinging counter attempt at a time. Whoever is feeding Swanson that tired old line of tripe about only needing to land once needs firing immediately. Swanson excels in those peculiar combinations—the kicks to the shin into the swinging lead hook and so on.

Would Holloway beat McGregor in a rematch? Who knows, but McGregor's strategy against Holloway was to go to the lead leg side kick, jamming Holloway's attempts to step in with his boxing. Swanson, meanwhile, seemed to want Holloway to step in so that he could attempt to counter.

Here's my strategy of the night—unaffiliated with Metro PCS's replay of the last thing which happened in a fight:

Lower down the card Ovince St. Preux put on a great showing against Pat Cummins. Scrambling up off the deck whenever he was taken down by the terrific wrestler, OSP did excellent work with a long left front snap kick to the body—summoning the spirit of the great Semmy Schilt. It was a left uppercut off of a cross face as Cummins ducked in which did the job for OSP though, and secured him a fabulous knockout win.

A final brilliant moment from last night came in Jacare versus Chris Camozzi. It was always seen as something of a squash match, but had Jacare done anything short of easily finish Camozzi again he would have been met with a heap of criticism. Not only did Jacare Souza easily armbar Camozzi in the first round, but he showed us something completely new—a wall walking guard pass. At one point Jacare's toes were actually in the fence and holding his hips up—which raises all sorts of questions about whether it can be technically called fence grabbing. So if you start seeing guys turning their opponent perpendicular to the cage, rather than the current norm of driving the bottom man's head and shoulders into it, you'll know who was the innovator.

And that's not even to mention Aljamain Sterling's rare arm triangle from the closed guard against Takeya Mizugaki, Beneil Dariush's continued success against the veteran, Jim Miller, or Paige Vanzant's ludicrous pace and ground and pound from the weirdest positions against Felice Herrig.

A terrific fight card all around, aside from the unfortunate loss of Yoel Romero from the bill a few days back. I cannot fault this perfect chunk of combat sports viewing. I can only hope that the UFC will one day abandon the pay-per-view model and bring cards like this to TV with regularity—casual viewers need to be exposed to fights like these.