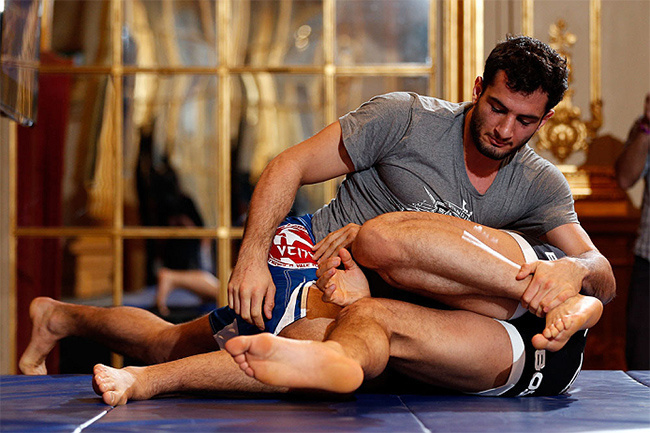 If you are looking for a dark horse in the UFC middleweight division, Gegard Mousasi is your man.

After years of battling in every other organization you could name—and plenty you couldn't  name with a gun to your head—Mousasi finally made it to the Octagon last April. Even after a successful promotional debut, however, Mousasi remains something of an enigma within the UFC, partly due to the nature of that victory.

Mousasi had originally been scheduled to face Alexander Gustafsson in Stockholm but a cut in training forced Gustafsson to pull out of the fight. One of Gustafsson's training partners, Ilir Latifi, a journeyman who’d been fighting mainly for regional Swedish promotions, stepped up on short notice and took the pasting most expected him to.

But Mousasi is a cautious precision striker at heart, and despite the convincing win, he wasn’t able to knock the overmatched Latifi out. For 15 minutes he jabbed Latifi's face into mince, and Latifi wasn't able to stop him, but the result was a performance as underwhelming as it was clinical.

As a result, the feeling among many MMA fans is that Mousasi hasn't gotten a real win under his belt inside the UFC yet, but this Saturday he will meet the great karateka Lyoto Machida at UFC Fight Night in Brazil in the first true test of his skills. I'll talk more about the specifics of that match-up later this week, but for now let's take a look at Mousasi's career and fighting habits.

Mousasi's career began at age 21 in 2005, and, for each of his first 14 fights he seemed to appear in a different minor-league promotion. After a decent showing in Japan's DEEP organization, Mousasi was invited to compete in PRIDE's Bushido events.

From 2006 to 2010 Mousasi looked incredible. Evangelista “Cyborg” Santos, Denis Kang, Melvin Manhoef, Ronaldo “Jacare” Souza, Mark Hunt (yes, the heavyweight), Renato “Babalu” Sobral, and Rameu Thierry Soukodjou: Mousasi not only defeated these men but knocked out or submitted every single one of them.

Mousasi's run was finally stopped in 2010 by Muhammad “King Mo” Lawal in a Strikeforce title bout. but after a couple more decent wins, and the folding of Strikeforce into the UFC, Mousasi finally found himself in the big leagues… and using his lead hand to reconfigure Ilir Latifi's features.

The Style of Mousasi

One of the reasons for Mousasi perhaps not being a fan favourite is that he is an adaptive fighter. Mousasi doesn’t have a trademark style; he changes from fight to fight depending on what he feels is appropriate.

For example, his fight against Keith Jardine was a fists-up walking down of the “Dean of Mean.” Mousasi cut off the cage, hands high and head low, ducking anything Jardine threw back. Meanwhile against Sokoudjou, Mousasi fought upright and kickboxed. Against Latifi it was hands low and bent at the waist. 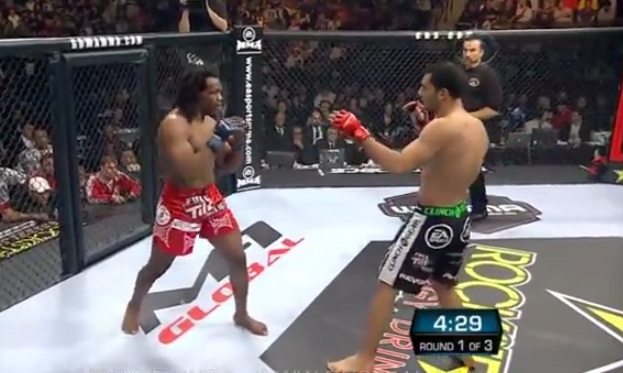 High stance, hands high, weight on the back leg in order to pull away from Sokoudjou's powerful kicks. 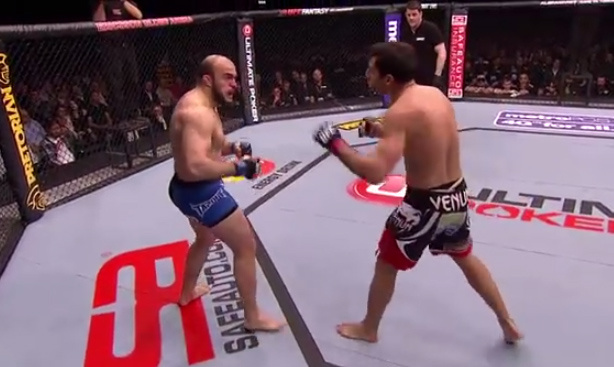 Crouched stance, heavy on the lead foot, hands low so as to travel a less detectable path and to stuff Latifi's takedowns.

There are a few things we can point to in every Mousasi fight, however, the first of which is a stiff, intelligent jab. When I say an intelligent jab I mean one that works differently depending on context. A fighter can have a power jab or a flicking jab, but if he only uses his lead hand in one way all the time he is missing out on a lot of opportunities.

For instance, Mousasi can use his jab to get inside on his opponents. The fight with Keith Jardine is a textbook example of this. Mousasi would come in behind his jab, duck Jardine's counter, and work in close with flurries.

Notice here how Mousasi steps in behind his jab, but rather than springing in and out, he steps in low to avoid the threat of a retaliatory swing (though Jardine kicks in this instance) before returning to standing with a flurry of hooks. Against Jardine, who is known as something of a chinny fighter, Mousasi was noticeably more aggressive in his striking style and used the jab to enter rather than as a stand-alone weapon.

In contrast, Ilir Latifi had a significant height disadvantage and was therefore swinging upward and losing length on his punches. Mousasi would dart in with a jab before stepping back and letting Latifi's swings fall short. What was a little disappointing about this performance was that though Latifi's counter swings most often fell short, and Latifi himself was left terribly out of position, Mousasi showed no desire to follow with a counter of his own.

In the opening round of that fight Mousasi had some trouble getting away from Latifi's counter punches, but by the end of the fight Mousasi's distancing was faultless and the chances of Latifi landing a knock-out punch had almost vanished.

Mousasi's distancing and composure are by far his most valuable traits. Rather than check kicks he will often withdraw the leg just slightly--a favourite move in Thai boxing. By fighting out of that high stance shown above and retracting his leg slightly from kicks, Mousasi had the hard-kicking Sokoudjou tripping over himself.

Mousasi will also use his jab to make his opponent retreat then chop out their front leg with a low kick. Here's a notable instance from his his 2010 victory over Japanese star Kyotaro in a kickboxing match

The Kyotaro fight is tremendously significant because Kyotaro, with his back-pedalling and ability to draw opponents onto his rear hand, is the closest thing high-level kickboxing has had to Lyoto Machida, Mousasi's next opponent. We're going to talk about this a lot more later this week when we look at the specifics of the Machida/Mousasi match-up.

Suffice it to say, getting an opponent to take a step back and leave that lead leg trailing is a fantastic way to hack away their base.

The Kyotaro fight also showed the value that Mousasi places on the teep (push kick). This is a criminally underused technique in MMA, but Mousasi has had good success irritating opponents with it in the cage.

Finally, Mousasi's jab serves wonderfully as a momentum breaker. Even when retreating he can connect a good, snapping jab and make his opponent reconsider their attack.

Up-kicks are something of a wild card in most fights. They don't land often but you only need to watch Oleg Taktarov versus Renzo Gracie, or even Frankie Edgar versus Benson Henderson, to appreciate the power in them. It doesn't matter how far the grappling game evolves, passing guard with your head in range and your opponent's legs free is always going to be dangerous in a fight.

In their 2008 Dream middleweight grand prix fight, Ronaldo “Jacare” Souza, who is an excellent grappler, attempted to dive into Mousasi's guard with punches. Mousasi caught him with an up-kick and knocked the Brazilian out cold from the bottom.

Earlier in that same tournament Mousasi's up-kicks distracted the accomplished Denis Kang. An up-kick is a committed movement with considerable wind up and recovery and Kang attempted to duck under Mousasi's up-kick in order to pass guard, but found himself instead locked in a triangle choke.

Against Soukodjou, Mousasi utilized a foot on the hip and an ankle grip to keep Sokoudjou on the feet in front of him for up-kicks before switching to a beautiful tripod sweep.

Notice how “The Dreamcatcher” distracts Sokoudjou then sneaks his right foot behind his knee. With both legs controlled (the right with Mousasi's left hand, the left with Mousasi's right foot), it is simply a case of pushing Sokoudjou away with the foot on the right hip until his centre of gravity reaches the point where he needs to step. At this point, of course, Sokoudjou can't step and he falls to the mat.

Unfortunately for Mousasi, he spent much of his time competing in Japanese organizations where the rules on up-kicking were different from promotion to promotion. In PRIDE FC kicks and knees to the head of an opponent were legal from all positions. In Dream FC knees and kicks to the head of a downed opponent were illegal unless both fighters were on the ground--which made up-kicks perfectly okay from the guard. The unified rules of MMA, which are used in major American organizations, however, prohibit any kick from the floor to the head of an opponent who is on his knees. Under unified rules, kicks from the bottom are only legal if the opponent is negligent enough to stand over the guard player with his head close enough to kick. Consequently Mousasi's up-kicks have resulted in point deductions on two occasions in the United States, against Muhammad Lawal and Keith Jardine.

Against Lawal, Mousasi struck viciously from the bottom throughout the fight. Each time Mo stood over him, Mousasi would kick into the knee of Mo's lead leg, hoping to bring Mo's head forward and in line to kick with the other foot.

Here's another nice instance of Mousasi pushing Mo away and attempting to use the other leg to kick Mo in the head as their positioning shifted. As Mo was on his knees at the time, this would have been entirely illegal had Mousasi's left foot connected.

In round five Mousasi was docked a point for finally connecting an illegal up-kick, though it made little difference on the scorecards. All three judges had King Mo far ahead. The fight raised some questions about judging criteria, however. Though Mo held top position for most of the fight, it was Mousasi delivering the power strikes repeatedly from the bottom. Bas Rutten won his UFC belt from the bottom in a far less active performance than Mousasi's against King Mo.

It seems as though Mousasi can end up in position to up-kick no matter who he’s fighting against. He even found time to up-kick Ilir Latifi in the brief time their fight was on the ground.

This has only been a brief overview of the stylistic constants of Gegard Mousasi, but what intrigues me so much about him is how changeable he is between each fight. It makes for frustrating viewing sometimes--against Sokoudjou, for instance, Mousasi looked nothing like the world-beater he can be--but when he's on point, and he's figured his opponent out, he's an incredible fighter to watch.

Sometimes when Mousasi has found the answer, it's almost underwhelming how easy it seems for him. His bout against Renato “Babalu” Sobral, for instance, seemed like a good match-up on paper but proved to be almost effortless for Mousasi.

Mousasi's meetings with Mike Kyle and Latifi were equally easygoing for the Armenian Assassin. But on other occasions he can look sluggish against middling opposition, as he did against Jardine and Sokoudjou.

Despite Mousasi's technical brilliance it's only fair that we subject him to the same skepticism and scrutiny we would anyone else who has just one fight in the UFC. The elephant in the room is that Mousasi has really only fought “the best of the rest” in his career. As respectable as Babalu, King Mo, Kyle, and the numerous other recognizable names on Mousasi's record are, they are not quite on the level of Chael Sonnen, Vitor Belfort, or Lyoto Machida.

The Heavyweight Weaknesses of Alistair Overeem and Frank Mir