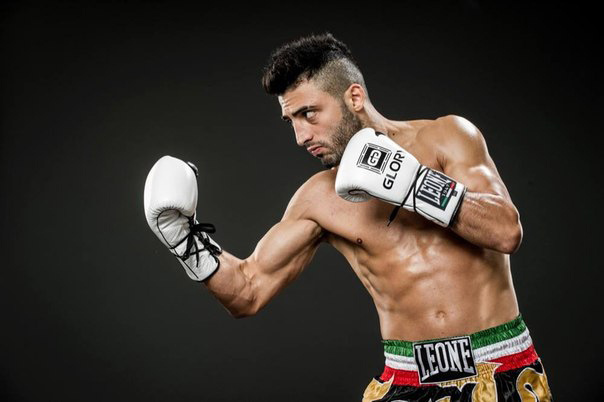 This past Saturday Glory 12 produced exactly the kind of upsets we love to see from a tournament, as the whirlwind of offense that is Andy Ristie was able to pull the shocking upset on defensive master, and pound-for-pound kickboxing great, Giorgio Petrosyan.

Ristie presented a very unique problem for Giorgio Petrosyan this past weekend because of his constant stance switches mid-combination. His techniques constantly come in from new angles with venom, and while his defense isn't always the best, Ristie’s gangly build and strange movements tend to come out on top in exchanges.

Ristie changes stances twice in this gif alone and was clearly giving Petrosyan fits. The straight-uppercut hybrid punch he ended the fight with snuck through on an angle that Petrosyan hadn't had to deal with from the opposite stance just seconds earlier.

Giorgio Petrosyan's TV debut may have been something of a disappointment for his fans or for viewers who had never seen him fight before but who had heard the stories. The man's reputation had been built up to heroic proportions. But I expect Petrosyan to rebound with some effect, and today we will examine how he got to the incredible 80-2-2 record he currently holds.

Control of Range and Distance

Giorgio Petrosyan, much like his rival for viewers at the weekend, Manny Pacquiao, is a southpaw, and both men reap enormous rewards from their stance choice. But where Pacquiao is the offensive master of boxing, Petrosyan is perhaps the best defensive fighter in kickboxing.

But there isn't anything special about Petrosyan's stance that allows him to be so effective against world-class opposition--that is just standard Muay Thai; rather it’s his mastery of distance.

Whether we're talking boxing, kickboxing, or MMA the most important thing one can do to an opponent is force them to move, to never allow them to set themselves. Anyone can have a good bash at something who’s straight in front of them, but laying hands on a moving target is tricky.

Petrosyan makes masterful use of three main methods for moving his opponent: turning them, pulling them in, and pushing them away. Sounds easy, right? Nope. Petrosyan isn't fighting mugs; he's fighting world-class kickboxers. And because he’s been the best for so long there is a target on his back, and coaches scour his fights for signs of weakness. Just as Ristie did.

Let's examine these three methods Petrosyan employs to force movement out of an opponent.

If you move towards an opponent you have no idea what he will do. He could move back, he could sidestep and try to crack you, or he could meet you with a punch or knee. It's a dangerous game. If you take a step back, however, the opponent's options are much more limited. He could step back--there's nothing stopping him from doing so--but it would certainly look strange to everyone in the arena, and there would be little point in doing so.

Rather, if you step back, you’re opponent will most likely step in and fill the space you left. That's the way it works. One contracts and the other expands. Yin and yang. And if you keep stepping back, you can convince an opponent, even a cautious and measured one, to overextend and expose himself to counters.

Notice how Petrosyan loses his footing but is up in time to counter his opponent's attack.

Petrosyan has used his backward movement to draw in fighters time and time again. His K-1 Grand Prix run in 2009 was a prime example. Against Albert Kraus, Mike Zambidis, and Yoshihiro Sato, Petrosyan was able to get each of them to chase him then hammer them with sharp counters.

These counters vary in their particular method of delivery, but the principle is exactly the same throughout: Get a fighter extending towards you and as he retracts his punch he will still be moving into your range. That is when you nail him.

The most perfect, and certainly memorable, example of this principle in action was Muhammad Ali's famous Anchor Punch.

Ignore the specific path of this punch and focus on the movements. Ali leans far enough away that Sonny Liston's jab falls short, but Liston is still moving forward as he retracts his jab, creating a window where he is completely vulnerable and also not throwing anything.

Notice how Petrosyan backs away from Sato, allowing Sato's punches to fall short, before swaying back in with his own punches.

Petrosyan will pull away and come back with an arcing left that serves as a cross counter or lean back with the right hook. Each stems from the same enticement to engage him.

Repeatedly backing away in the face of an opponent's aggression also creates opportunities to cause that collision UFC middleweight Lyoto Machida loves, the intercepting knee. Petrosyan's left stepping knee is undoubtedly his money strike; it does the majority of his damage in fights.

Of course another way to control an opponent's movement is to confront him. Petrosyan is one of the best fighters in the world at physically unbalancing his opponent. Again this is just a principle; Petrosyan has numerous methods for applying it.

The first is his excellent teep. In pure Muay Thai competition the teep plays an extremely important role. Much more than in kickboxing competition, fighters are much more willing to lead with kicks and will focus their fury on the arms of an opponent if nothing better is on offer. To avoid this kind of attrition kicking it is very important to have a push kick or teep that can come up fast, straight out of the stance, and bump your opponent off balance mid-motion.

Notice here how Petrosyan uses his teep to jam his opponent's attempts to advance. He also uses his lead glove against Pinka's raised lead forearm to keep him at distance. The end of the gif shows what happens when a relatively light teep meets a kicking opponent.

Petrosyan uses his gloves to force Pinka into the ropes. Pushing like this is illegal in boxing but completely legitimate in kickboxing, Muay Thai, and MMA.

Petrosyan will use this technique off of his lead leg throughout a bout but especially in the early going. Of course an opponent can be winded if he advances onto a teep, but more importantly it shapes his offensive ambitions. It frustrates him and this, in turn, makes him more willing to chase later in the bout.

The final means to direct an opponent's movement is to turn him. You will constantly hear boxing coaches yell this at their charges: “Keep turning him!”

Why? Because nobody can punch hard without their feet set. The occasional fighter will be able to hit well on a pivot, such as Roy Jones Jr. or Jersey Joe Walcott, but they perform those movements to hit and get off line, not to turn and face an opponent who has moved off line himself.

Petrosyan is often looking to get to an angle on his opponent, and even if he doesn't succeed, the turning opponent will often open himself up to strikes as he tries to keep Petrosyan in front of him.

Petrosyan successfully moves to an angle by performing a hand trap with his right and throwing a left straight before hopping out to his right. He is now in an orthodox stance and throws an overhand right as Sato turns to face him.

More often than not Petrosyan likes to perform that most basic of southpaw tactics, getting his lead foot outside the opponent's. Petrosyan doesn't do this exclusively to look for a left straight, however; he will also use it to pivot and make the opponent turn to face him. This technique comes in handy in all sorts of situations.

By checking Albert Kraus' lead hand and keeping his own left elbow high, Petrosyan remains safe from punches while completely reversing position. Once Kraus is on the ropes, Petrosyan immediately goes on offense.

In this instance Petrosyan goes from botching a low kick and falling into the ropes to reversing position and trapping Sato in a corner in just a moment.

Petrosyan threatens the turn and hacks at Kraus' lead leg instead.

This is perhaps Giorgio's most powerful application of this turn. As Kraus turns to face him, Petrosyan finds an opening for a hard left kick. He has also landed his left stepping knee off of this pivot before and attempted high kicks out of it.

If you haven't gathered from my extended gushing, Giorgio Petrosyan is very good at what he does, and there isn't any fan or fighter who can’t learn something from watching him fight. The downside of defensive genius is that it often streamlines itself to shut down and exploit the orthodox but struggles in the face of the bizarre, which is just what Andy Ristie is good at.

Ristie certainly got the better of Giorgio Petrosyan at Glory 12 with his stance switches, knees, and power from strange angles, but there's no reason to suppose that Petrosyan, who’s just 27 years old, won't rebound and learn from his mistakes.

Check out these other breakdowns from Jack Slack:

Angles and Feints With Lyoto Machida