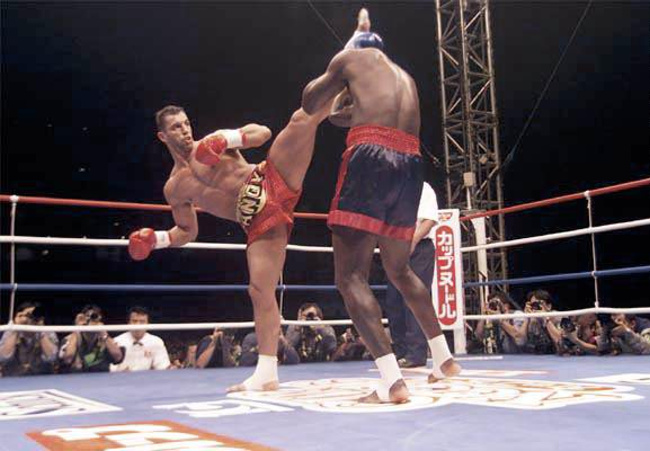 George Foreman once said that the most significant punch in his bout with Muhammad Ali—the famous Rumble in the Jungle—was one which Ali didn't throw. After Ali came off of the ropes in the 8th round to wobble the colossal heavyweight champion, he kept his right hand cocked and ready to fire as Foreman fell. But he never threw it.

In another old tale of the boxing ring, Willie Pep—the dancing master—once announced to the press that he would win a chosen round without throwing a punch. Pep feinted and faked, he moved and shuffled, and at the end of the round he had apparently won it on two scorecards.

How about Roy Nelson? Against his smarter opponents, Nelson won't land a single right hand—but it doesn't leave their mind for even a moment.

You see, a strike doesn't need to be landed to effect the course of a fight.

Today I want to look at one of my favourite fighters, and a strike which is so rare, and so unique that you will see it used in a high level bout maybe once a year.

The fear which this fighter generated with this strike had opponent's leaping backwards across the ring each time he stepped as if to perform it. It had well trained strikers forgetting their fundamentals and allowed him to knock out the best fighters in the world with simple techniques. Yet he never stopped a professional bout with the strike itself.

The fighter was Andy Hug, and the strike is, of course, the axe kick

The axe kick's roots are in Japanese karate and Korean martial arts, yet you won't see it appear in any traditional forms. It was not passed down from generations past as a traditional technique in kata—for obvious reasons. It takes a unique set of attributes to perform well, and it just isn't an effective self defence or scrapping technique. Roundhouse kicks are often thought too dangerous for self defence because of the exposing of the groin. Just look at a prime Hug axe kick and notice how it is almost led by the crotch.

But you won't even see it in karate competition that much. Traditional karate is a points game—kicks to the head score highly but must be controlled. You can't slap the side of someone's face and let out a whooping kiai to get a point with an axe kick. Instead you miss wildly or crash down on their head. There is no middle ground.

The only karate competition in which you will regularly (relatively speaking, of course) see axe kicks is Kyokushin karate and its derivatives. Mas Oyama's style of sparring—bareknuckle with kicks to the head, body and legs permitted, punches to the body allowed, but punches to the head prohibited—encourages the development of the lower limbs to the extreme.

Kyokushin fights are pretty ugly. The footwork is very limited and most of the fighting is conducted in flurries of body punches at close range until one man can sneak in a high kick from almost chest-to-chest.

Kyokushin fighters consequently learn more about offence and toughness than they do about defence, and often struggle against good punchers in kickboxing competition as a result (Hug himself was shaky in punching exchanges). But you will see plenty of spinning kicks, jumping knees, rolling thunder attempts, inverted roundhouse kicks and, of course, the axe kick.

Hug bashing Ernesto Hoost, Cro Cop and Mike Bernardo over the head. If they don't have a good defence for it without raising their arms out of their guard, no-one does.

I believe that most people, barring serious injuries, can learn to throw up an axe kick. The initial part is just a leg swing as one would use to loosen off before training, after all—coming up either on the outside or inside of the centreline, depending on how you want to hide the kick. The problem is the coming down. As soon as you meet resistance, you face the possibility of hyper-extending your leg. To counter this the leg must maintain some flex and must be controlled on impact rather than allowed to hyper-extend. This, as you can imagine, takes some strength.

A final consideration is that the axe kick is incredibly energy consuming. If you're a relatively healthy adult, you can probably shadow box a couple of rounds. Try the same with three or four axe kicks thrown in and life is a lot harder. You're swinging a quarter of your bodyweight to head height and down again—that doesn't happen easily.

The Axe Kick as a Strike

Andy Hug cracked a lot of men on the top of the head with his kakato-otoshi. In Kyokushin competition he knocked a few guys down and out with it. The power on the kick was tremendous and it could come up in a number of ways.

The axe kick off of a faked spinning kick – from outside to inside.

Off of a faked round kick – from inside to outside.

But more important than the number of variations upon the kick was the fact that Hug rarely threw the axe kick alone. It was normally part of a blitzkrieg of leg techniques to chase an opponent down. He would kick, he would spin and he would feint. And somewhere in the middle, you would be thinking about something else and that heel would already be above you!

Yet I will shock a few who are familiar with Hug when I say that 'The Blue Eyed Samurai' never stopped a professional kickboxing bout with an axe kick.

I have spoken to a few men who think they are on to the Moneyball of martial arts—they break techniques down by finishing percentages, or landing percentages. That is all well and good, and there is tremendous value in working out what connects at the highest percentage—but it ignores the value of forcing a defence.

See, the secret to Hug's success was in that axe kick, and in the Hug Tornado (the wheel kick to the leg).

Between these two techniques, he recorded just one finish.

The numbers get a little better when you look at knockdowns and include wheel kicks to the head, but only slightly.

But the kicks didn't need to be felt by the opponent to take their toll on the course of the match.

Hug scored a number of sensational knockouts with the basic roundhouse kick to the body. In high level kickboxing, if you kick at the body, you will hit the arm. Almost every time. Some men work on attrition—Yodsanklai Fairtex, for instance, would just go at that arm until his opponent gave up. Yet for some reason... Hug connected flush on the ribs an awful lot.

When Ernesto Hoost is asked how he kicked so few shins in his tremendous low kicking career, he explained that his opponent was never in position to check when he wanted to kick (normally because he was throwing a three or four punch combo at their noggin.

The axe kick was creating opportunities for simpler techniques simply because it is such an awkward angle to defend. From his basic guard, a fighter does not have a practised response to overhead strikes. Whenever Hug took a step forward, or began to march forward with his lead leg pointing outward, it was assumed that axe kick was coming. The opponent's hands went up, and he connected a good kick to the ribs.

Duke Roufus, a very experienced fighter, couldn't decide where he needed his hands against Hug. That, more than the chance of a KO, is the power of the axe kick.

Hug backs Patrick Smith onto the ropes, Smith's hands go up, and Hug winds him with a round kick to the body.

The axe kick also clears the way to come in with punches. Ironically, Patrick Smith handed Hug the first loss of his career by coming in with an axe kick, followed by a right straight.

It's a simple principle. It is the same with the jab to the solar plexus in boxing. You won't knock anybody out, but if you keep going to it, they can't keep ignoring it. When they move to do something about it, they leave openings elsewhere. It is a punch which cannot be as comfortably defended from the usual guard as other punches. It is no coincidence that Floyd Mayweather Jr. and Sugar Ray Robinson both made something of a speciality of the body jab and follow ups from it.

Need a more recent example? Both Maidana against Broner, and Cotto against Martinez, landed hard left hooks by establishing the jab to the body, then changing levels but instead throwing the hook.

And this was Hug's greatest strength. His ability and willingness to throw bizarre strikes made him a master of feints. Notice here, as he has Ray Sefo leaping across the ring with slight feints of back kicks.

Hug's ferocious kicking power, and focus almost always on his opponent's—typically less conditioned—rear leg, also led him to a number of low kick knockouts over kickboxers who should have been above that.

Hug working over Sefo's back leg.

Hug capitalized further on this fear of his kicking game by mastering the faked round kick to rear straight. In this manner he was, without any semblance of a boxing game, able to stop the iron jawed, K-1 defensive great, Ray Sefo with punches, among many others.

Notice the hip feint which forces a leg raise from both opponents. This was a staple of Hug's game.

But now we're talking about other facets of Hug's game which I didn't really want to talk about today. I rate Hug as perhaps the finest kicker in the history of combat sports, and certainly one of the best kickboxers ever—and I rate him even more highly for the unique approach he took to it.

Every now and again, someone will imitate him in the ring. It's nice to see Jon Jones throw up a slappy axe kick, or Tecia Torres sprinkle them into her domination of Felice Herrig. But those were an exercise in flexibility in the middle of a dominating performance. Hug's axe kick served a purpose. Opponents spent months preparing for it—not on the off chance that he would throw it, but with the expectation that he would.

Putting it all together! Hug catches the ducking Mark Russell over the back of the head with his calf during an axe kick. From here Hug works Russell over like a bonus round car—flurrying with punches and a body kick. Hug finishes with a kick to the back leg for the knockout.

Hug had the set ups and a whole game leading to and from the axe kick. And that, to this point, is completely and utterly unique.

Fighting Motives: Broken Weapons and the Search for Alternatives