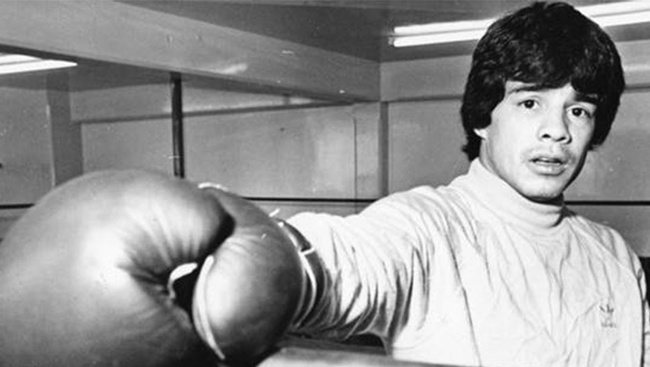 On the 23rd of April, 1977, two young Mexican world champions stepped into the ring with a combined 75-0. Spotless records aren't unusual in boxing, this is a sport which spends years feeding its best prospects soup cans until they have the kind of numbers on their records that fans will care about. What was astounding was that of those 75 wins, 74 came by way of knockout.

There is little doubt that Carlos Zarate Serna versus Alfonso Zamora was one of the greatest match ups of finishers in the history of boxing. Zarate, the WBC bantamweight champion had let just one of his forty-nine opponents reach the final bell. Zamora, the WBA bantamweight champion, had allowed that dignity to none of his twenty-nine victims.

The stats are astounding—and that sole decision allowed Zarate to become the only boxer in professional history to accumulate two streaks of twenty knockouts. A record which would take some bizarre fortune to beat.

Both of the young men were Mexican, born and raised, and I am sure that I don't need to remind readers of the Mexican passion for the sweet science. Though the bout was held in Inglewood, California (which seemed like a missed opportunity for a huge event in Mexico), the fan turnout was incredible.

But before the bout was even signed there were rumblings and drama. The WBA and WBC both wanted their champions to pay for the privilege of defending their belt against the other governing body's champion. An agreement was never reached so the two most important bantamweights champions around agreed to meet in a non-title affair over ten rounds, rather than fifteen.

Furthermore, the bad blood between Zamora and Zarate's managers took up most of the headlines, rather than any ill feeling between the fighters. Zarate's manager had been Zamora's manager as well until he recently sold Zamora's contract back to Zamora's father. The two had been butting heads ever since.

I called the two men some of the greatest “finishers” in boxing history—rather than knockout punchers, because Zarate got his work done with well placed blows and often through attrition. Zamora, meanwhile, was deserving of the title of a truly prolific puncher.

Short and squat, even for a bantamweight, Zamora would swing hooks with such force that his elbow would follow through, past his centerline and, if he missed, he could turn himself almost around so that he couldn't see the opponent. When he whiffed his shots he looked clumsy, but when he connected the results spoke for themselves.

Here is the ease with which he put away Eusebio Pedroza, one of the dirtiest fighters of all time, and a future featherweight world champion. This was just two rounds into a fight which was scheduled for fifteen.

Zarate was pretty bizarre as fighters go. He was tall for a bantamweight, and even tall when he fought at a higher weight, but he loved to fight on the inside. Reminiscent of the great Alexis Arguello, the gangly Zarate's punches looked slow and didn't involve the full body torque of Zamora's, yet when he found his mark Zarate could send fighters to the mat just as easily.

Zarate's favorite punch was the left hook / uppercut to the body which he threw inside of his opponent's right elbow. This was not only Zarate's money punch, but he used it so frequently that it almost replaced his jab. Leading with left hooks to the body is not a normal strategy, especially if you're taller than your opponent and have to reach down further to do it, but that was what Zarate did almost every time he stepped in, and his results are tough to argue with.

The uppercut and body hook working in combination.

Zarate's other best punch was his right uppercut which he chained with this left hook to the body beautifully. Because of its awkward feel, with both hands dropping in succession, the left hook to the body and right uppercut are not used in combination nearly enough. Lead with the left hook and you have a good chance of landing the uppercut on a hunched opponent, lead with the uppercut and you stand them up straight, exposing the midsection.

When the bell rang on that April evening, the crowd was rabid with anticipation. They could not see the fight going the distance and were afraid to blink and miss the turning point in this battle of knockout virtuosos. Just a minute or so into the first round, however, the fight took its first strange turn as a man seemingly in his underwear leapt into the ring and seemed to want to convince the boxers not to fight.

Fortunately this cretin was soon ejected roughly through the ropes and the bout resumed. Zarate pushed forward, in the lowest stance we had ever seen from him, as he looked to get in on Zamora's liver. Each time Zarate tapped in a punch, he would be clouted by Zamora's glove or forearm.

As Zarate started to get the timing down on Zamora's hooks, he was bobbing and landing some blows to the body. Zarate backed Zamora on the ropes and pressed in close to dig with shots to the midriff, but Zamora clipped Zarate with a forearm over the back of the head which sent Zarate stumbling onto the ropes. Zarate looked in a daze as the round came to an end and he walked back to his corner.

In the second round Zarate got right back to the inside. This time he found the mark with a couple of short, pool cue right straights which wobbled Zamora. As Zamora looked to be in trouble for the first time in the fight he swung a couple of hooks which turned Zarate's head around.

As the third round started there was an explosion in the crowd. A fan had set off a firework and set the crowd to panic, but the boxers never broke their gaze on each other. Now Zarate was starting to show his understanding of Zamora's timing. He knew that the two hooks or the uppercut were coming back each time and each time he dipped down to the side after he punched in hopes of making Zamora miss.

Near the end of the third, Zarate was able to land a left hook as Zamora was hooking—a very dangerous time to get hit. This sent Zamora reeling onto the ropes and Zarate rushed in to land his uppercuts. Finally another short right straight put Zamora down for the first knockdown of the fight.

The bell rang to end the round and Zamora received a brief respite from the punishment. As the bell sounded for round four, Zarate was already on top of Zamora. He didn't care for avoiding the punches any more, he just wanted to put Zamora away. He quickly knocked Zamora down and as Zamora returned to the fight, Zarate was able to land another one of those right straights, followed by a left hook and put Zamora down a third time.

Before Zamora could begin to rise the towel had come in and landed across his face, as one would cover the face of a cadaver before he was taken to the morgue.

The bout was over but the fight was not. Alfonso Zamora Sr., Zamora's manager, immediately leapt up to the ring apron and ran to take a swing at Zarate's manager. Security intervened and after some time had passed, the referee was able to get the boxers to the centre of the ring and provide the official result.

Alfonso Zamora, following his first taste of defeat, fought just eight more times. Going 4-4 in those, he retired in 1980. He still had the power, but something of the man was gone—his confidence had been shaken and he just didn't throw those wound up headache makers with the reckless abandon that he used to.

Carlos Zarate fought on until 1988 and went up in weight to super bantamweight—though he was never able to take that title. Zarate and Zamora both secured high ranks in Ring Magazine's 100 Greatest Punchers of All Time—Zamora coming in at 47, and Zarate at 21. Zarate was elected by the associated press as the greatest bantamweight in boxing history, and in 1977 he was nominated Ring Magazine's Fighter of the Year—and not for lack of competition, he was preceeded by a surging George Foreman in 1976, and succeeded by a returning Muhammad Ali in 1978.

Jack Slack: A Round of Sparring with Sugar Ray Leonard