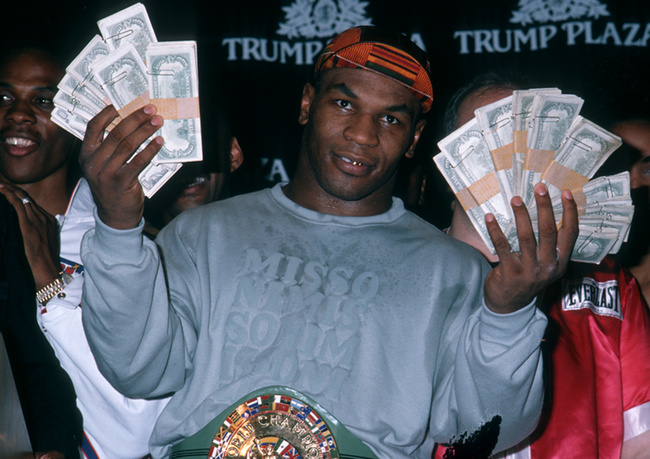 “Me and Jamie Foxx have been in discussions and, within a year, 18 months, we’re going to do The Mike Tyson Story,” the boxer and larger than life personality told IGN.

At 46, Foxx is only two years younger than Tyson is now, which makes him about a quarter of a century older than the boxer was in his prime, but Iron Mike says that they’ll get around the age issue by using CGI. They plan to use the same method that the filmmakers behind The Curious Case of Benjamin Button employed to alter Brad Pitt’s appearance throughout the course of his character’s life. “They’re going to have the thing like Brad to make him look younger,” he said.

It looks like Foxx’s boxing won’t need to rely on any such computer wizardry, though. Tyson told IGN that the star has already asked him for lessons to help him prepare for his role.

Tyson also suggested that legendary director Martin Scorsese might become involved in the project, although he’s not sure in what capacity just yet.

Foxx is a promising choice to play Tyson for a couple of reasons. First of all, he’s already demonstrated that he’s pretty good at the whole biopic thing, having scored a Best Actor Oscar for his portrayal of Ray Charles in Ray and done an admirable job of playing Muhammad Ali’s cornerman Drew “Bundini” Brown in 2001’s Ali.

Secondly, we already know that he can do a decent Tyson, because he’s being impersonating Mike since he first started doing standup comedy. Contrary to some reports, he did not play Tyson on In Living Color—his co-star Keenan Ivory Wayans already had that role locked down on the beloved comedy show. Foxx did, however, play another troubled and lisping boxer called Carl The Tooth Williams in a series of sketches.

Tyson actually caught one of Foxx’s standup performances. Foxx told the story on his appearance on Live With Michael and Kelly this past June.

One night, back when “Mike was knocking people out for no reason,” Foxx reached the part of his set where he made fun of the boxer. “I’m on stage and I say ‘I’ve got this Mike Tyson impersonation.’ And the whole crowd hushed because Mike was in the audience,”  he told the show’s hosts. “And then one dude yells ‘Mike said go ahead and do it. It better be funny!’”

Tyson was impressed enough to pay a visit to Foxx after the show. And to lightly punch him in the chest for his efforts.

After telling that anecdote on the show, Foxx went on to discuss his interest in playing Tyson and making a film about his life. He talked about hanging out with the man when he was at the height of his career and hanging out with him now, and how powerful that journey has been. “I think that story would be fantastic.”

He also mentioned that he can do a pretty convincing job of posing as Tyson when he beefs up, like he recently did for another film. “I actually gained 225 pounds to do a role at one point and I had my makeup artist dress me up as Mike Tyson in Toronto, and people were literally coming up and asking me for autographs,” he said. “So Mike, if you’re listening: Let’s make history.”

Someone in Tyson’s camp clearly heard the plea, because that appears to be exactly what they’re doing now.

As excited as Tyson is to make the film, though, he has no interest in seeing it. “I’m never going to watch the movie, of course,” he told IGN, saying that he’s far to embarrassed to relive all of his past mistakes on the big screen. “I’ll probably watch it alone.”

Haymakers and Scooby-Snacks: Mike Tyson's Got a New Cartoon