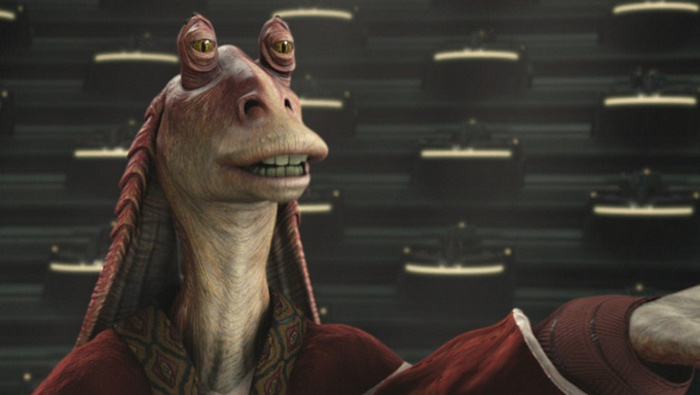 Listen close, and I will tell you of the greatest trick the devil ever pulled.

The new Star Wars film is almost upon us, and if you are like me, you pray the new JJ Abrams film will eclipse the farce of the candy cane prequels. The CGI saturated tale of how Annakin became Vader fell so far short of our expectations, despite a fantastic Jedi duel, grand actors Liam and Ewan’s best efforts, and the visual potential of a speeder race through the dunes and vast battles between armies of clones. If one asks any fan why the films were so bad, it inevitably comes back to one man-thing: Jar Jar Binks.

Everyone pronounces his name with derision and disbelief, the way his toad overlord does in those first scenes of the Phanton Menace, for “no fictional character in history has created the amount of passionate hate that he has.”

And yet perhaps all is not as it seems.

Just a few days ago, /Lumpawaroo posted a theory on Reddit that is spreading like wildfire through Star Wars fandom. In his post, now with over 7,000 upvotes and counting, /Lumpawaroo analyses Jar Jar’s performance in the prequels and comes to a radical revisionist conclusion: Jar Jar Binks is actually an all-powerful Sith Lord, Supreme Commander Snoke, who has mastered mind control, Drunken Fist Kungfu, and the subtle art of “acting the fool” utilized by many beings with god-like power, including his counterpart Master Yoda.

"Yoda really comes from a tradition in mythological storytelling- fairy tales- of the hero finding a little creature on the side of the road that seems very insignificant and not very important, but who turns out to be the master wizard, or the master thing..."

In a little more than two days, the theory has spawned a subreddit, a Facebook page, and a designated website, DarthDarthJar.com. The Internet truly is a thing which moves with blinding speed.

The implications for the Star Wars faithful are indeed significant, but this essay will take a narrow look at the theory and examine Jar Jar’s Drunken Fist skills to see if there is any merit.

Drunken Fist is a bona fide style of fighting, with footwork and strikes developed out of the stumbling gait of a drunken fool. But it was never meant to be a style with school as such, like Shaolin or Mantis or any other kung fu style. It’s more of a tool, a technique to be used by the accomplished kung fu master when trying to confuse and trick his opponents into thinking he is incapacitated, insignificant and unworthy of attention. If the opponent deems the drunken master to be a buffoon, Success!

If we take a look at Jar Jar in the very opening of the film, we see him preparing to somersault into the lake in front of the two Jedi:

Compare this with a Drunken Master centering himself here:

Ok. Maybe. The somersault in and of itself is spectacular and out of character for a clown who steps in poodoo and gets his tongue caught in contraptions throughout the movies, but no big deal. Jar Jar is an amphibian. Even toads can look graceful when they leap into the scummy pond.

But check out these tricks, all courtesy of /Lumpawaroo:

Still unconvinced? I don’t blame you. The theory deals with more than just Binks’ possible martial arts prowess and there are new bits and pieces of evidence supporting and disproving the theory popping up as the hive mind coalesces around this vital question. Most have little to do with the Drunken Fist techniques Jar Jar Binks/Supreme Leader Snoke employed to achieve his goals while keeping himself well hidden.

Regardless of what happens in the films to come, the idea that Jar Jar is not just a clown written in to attract the kiddies and be able to slang Star Wars merchandise is an important one. It allows people to hold onto dreams, re-watch what was once considered a horrible travesty of a film with completely new eyes.

It also serves to remind us that things aren’t always what they seem, and trickery is as much a vital component of the warrior’s toolkit as brawn and bravery.