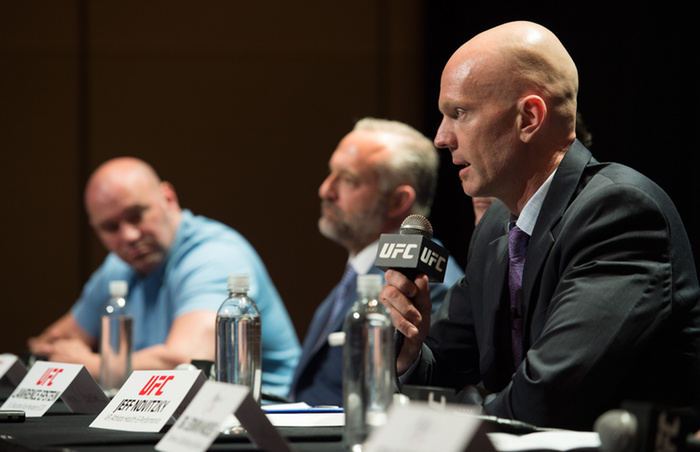 The first year of the USADA era in UFC has been a bit of a rollercoaster, with several of the organization’s biggest draws being flagged for potential anti-doping violations, including Jon jones and Brock Lesnar.

Jeff Novitzky, Vice President of Athlete Health and Performance for UFC, has a history of bringing PED violators to justice. In his storied career, he was instrumental in shedding light on Lance Armstrong’s and Marian Jones’ PED use and admits he is “satisfied” with the role USADA has played in cleaning up MMA since their program was rolled out with the world’s flagship MMA promotion in July 2015.

“We rolled out the program on July 1st last year and it was an amazing task we undertook,” he explained. “We have over 500 athletes in 37 countries that are now part of our program. It was important to educate athletes as we gradually introduced the program.

“We did that for the first year and now this third quarter of 2016 is the first quarter that we have had a fully implemented program. USADA is conducting 650 to 700 tests during this quarter, and that’s the highest amount of testing that has been done thus far.

“Generally, I expected it to go this way. I imagined there would be some bumps and bruises early on. I expected that we would acquire a few positive tests that would establish this program as being very real and not just a piece of paper.

“Overall I’m very satisfied with where we’ve come. The deterring factor we established early on has had some positives. Out of the large amount of tests we have done, in my opinion, we haven’t found a large amount of positives.”

Jon Jones made a multitude of headlines when he was flagged for a potential PED violation days before UFC’s marquee event, UFC 200.

Although Jones seems confident that he will have a shorter sentence than the initial two-year suspension that was forecast based on an Instagram post he made last month, Novitzky claimed that his future still lies in the hands of USADA and the NSAC.

“We don’t really comment on anything other than the initial potential anti-doping violation,” Novitzky said.

“It doesn’t really matter what Jon thinks or what we think because the only people that matter in his case are USADA and the Nevada State Athletic Commission. Ultimately, they are the two bodies that will decide what the sanction will be.”

Although UFC 200 wasn’t the best event for UFC in terms of PR when considering Jones’ withdrawal, and after the event, Brock Lesnar being flagged for a potential anti-doping violation, Novitzky believes that two of the UFC’s biggest stars being flagged will dissuade other fights from using banned substances in the future.

“I think it will dissuade other fighters from using banned substances. One thing we tried to drive home early on was the fact that independent body would be doing the testing. They have no business interest with UFC.

“When you get instances like Jon Jones’ a few days out from UFC 200–the potential violation being handed down and him being pulled from the card–I think that’s when the other athletes really take notice. It underlines that everyone is being treated equally.

“It’s never a good thing when something like that is handed down, but you’ve got to take that lemon and turn it into lemonade so it can be used as a teaching tool. It sends down a message that it doesn’t matter who you are, once you’re on that roster you’ll be treated the same as everyone else.”

The timing of Jones’ exit from the UFC 200 card put fans of the sport and the promotion itself out quite a bit, considering that ‘Bones’ was one of the headline athletes on the card.

However, due to the independent testing system, Novitzky claimed that late notices could potentially pull fighters from contests just days before they’re set to compete in the future.

In the case of Brock Lesnar’s test being flagged after he had already competed, despite UFC liaising with USADA to see if they can get all tests back before an event takes places, it is something that cannot be guaranteed.

“We could see further fighters pulled on short notice in the future. We obviously had incidents on both sides of that event, Jon before the event and Brock after the event based on a test that he did before the event.

“Ultimately what it comes down to is, there are no blackout periods with this program. Because of that, there can always be instances where a test is returned shortly before or after an event.

“We have been talking to USADA and trying to put something in place whereby all tests will be returned before an event, but you can never guarantee that. Whether it is three, five or seven days before an event that an athlete is tested, there is always the prospect that it won’t come back until after,” he said.

While there were many up in arms when Lesnar was handed a USADA exemption by UFC in the lead up to his return, Novitzky insisted that because the WWE superstar’s first tests came back negative after signing for his fight, he had no problem with him being given the exemption.

“There has only been one exemption and that was Brock Lesnar. The way the policy works, the athletes have to engage in the program for four months before they compete unless it is inherently unfair to the athlete.

“In Brock’s situation, he only decided to come back and be part of the pool about five or six weeks out from his return. It was because of the contractual situation he had with WWE, but that was finally settled and he signed a deal with UFC.

“He was tested five or six weeks from UFC 200. There were multiple tests taken from him that came back negative. If the first tests we got back from him were positive I would have been concerned but there were negative tests that came back initially.

“For me, the exemption was fine because there was nothing in his system initially. Then when there was, he was caught.”

Novitzky stressed why he believes policing PED use in combat sports is more important than other sports.

He also maintained his team is looking into compensating fighters who have been found to have fought opponents who have used PEDs, something that Mark Hunt has spoken passionately about since his bout with Brock Lesnar, who was flagged for a potential violation after the fact.

“It becomes very worrying when you talk about one of those humans or both being artificially enhanced. It’s very important to police this sport in terms of PED use.

“Right now there is financial consequences in addition to sanctions for athletes who test positive. In a circumstance where an athlete has fought a guy who was using, compensation is something that we are looking at. We’ve just got to evaluate our policy, but it’s something that we will be definitely looking at going forward.”

Tainted supplements are a serious issue in the modern sport, and Tim Means’ and Yoel Romero’s relaxed sentences after USADA investigations proves that there is a real problem in the industry that could affect fighters.

While it is not guaranteed that fighters won’t test positive after using third party certified supplements, Novitzky claimed that it is the only recommendation that he can make to fighters.

“We only recommend supplements that have been third party certified, meaning third parties get involved to test supplements to make sure they are free of banned substances.

“There are several reputable companies around the world that do this, even though with that it’s not 100 percent guaranteed (that fighters could not be potentially flagged for a doping violation). The frustrating thing with the supplement industry is that often what’s in a supplement can vary from bottle to bottle.

“Saying that, third-party tests supplements are the safest you can get. These third party companies are putting their reputations on the line by certifying the various brands.

“In the cases of Tim and Yoel, they did not have supplements that were third party certified, so that’s where they ran into some trouble.”

Although many are forecasting “tainted supplements” to become the go-to excuse for fighters who are flagged from now on, Novitzky is adamant that investigative means will prove whether their claims are genuine or not.

“Anybody can use that excuse, but ultimately what it comes down to is USADA or a relevant commission doing an investigation to determine if that is true. In the cases of Tim and Yoel, it required a lot more than just an explanation that it was a tainted supplement.

“An athlete can give any excuse they want, including the tainted supplement one, but unless it’s proven by investigative means, that excuse isn’t going to go very far.”