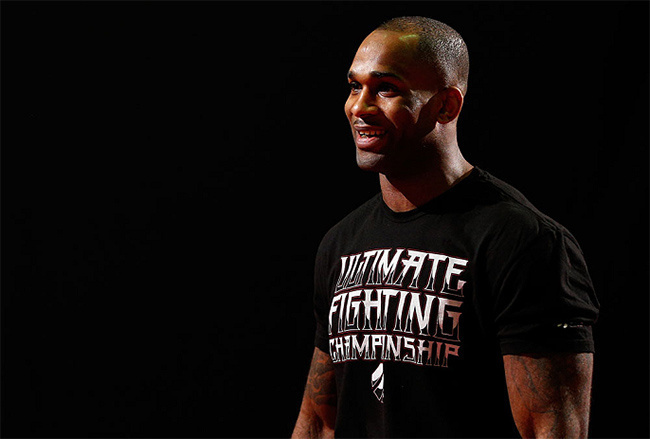 If he had to, UFC light heavyweight Jimi Manuwa could describe the confines of a prison cell just as well as those of an MMA cage. Or the forecourt of the luxury rental car business he co-owns, a line of supplements he's launched, or his Lion’s Pride gym, where he works and trains in his hometown of Croydon in Greater London.

In the last decade the Nigeria-born Englishman has moved away from the life of a wayward youth—a life that involved countless bar fights and an eventual jail sentence for burglary--and parlayed his career as a mixed martial artist into several other ventures that offer the chance for a bigger, brighter future. As he gradually opens up Manuwa will admit that some ghosts of his past life might still try to haunt him, but just as quickly he dismisses them with a shrug.

Fightland: It seems you’re keen on building a life outside of fighting.
Jimi Manuwa:Yeah. I’ve got to concentrate on bringing in the income and being business-minded. I’m passionate about cars so I've got a supercar hire company; I’m passionate about fighting and training so I've got Lion’s Pride Gym. We started Warrior Energy, a nutrition company, a few months ago. It’s keeping me busy.

Most fighters aren’t that “big picture.” Is it the same mind-set that made you turn down the UFC twice before you accepted a contract?
Yeah. I think I’m mature enough to make the right decisions. When I first got offer to come to the UFC it was too early for me. I think that comes with age. I knew right from the very beginning I would be fighting for the UFC; it was just a matter of being dedicated. I stuck to the plan and here we are.

At what age would you say you became the man you are today?
My early 20s. I started getting my head right. Possibly it was formed by experiences I had when I was younger, but I think when everyone grows up … well, some people don’t [grow up] and stick to what they do. I had a good head on my shoulders.

Was it frustrating to see people you know not mature?
A little bit, but I think everyone’s different and without those sorts of people … everyone can’t really be the same, can they? There’s got to be some not-so-good people and some who excel.

Have you lost many friends because of that?
Loads, loads … but it’s all life experience, innit?

Do those people try to come back into your life now you’ve got a high profile job?
Not really. Some people try to, but I keep my circle small and people know that about me.

Are certain people envious of your life now?
Yeah, there are those people out there but it’s their problem. I don’t think about things like that: I concentrate on my family, my career, and the people who care about me.

Have you always been a popular guy?
Not really (laughs). Maybe a little bit. D’you know what? When I was younger, in school I was smaller than everyone else so I’d try to stand out. Now with all the attention I still get a bit shy when people ask for a picture. I’m getting a bit more used to it.

Are you one of those “attack the day” types? An early riser?
(Jimi’s manager and some nearby UFC bods start laughing.) They have to dig me out of bed in the morning! You have to give me an order. If I’ve got nothing on I'll stay in bed all day. Think of the lion! They lay about but when it’s time to perform they’ll defend their territory.

You work with youngsters a lot at your gym …
I work with some of the naughty kids from the naughty schools. If I see them messing around I'll mess around with them but I'll give them a serious message when it comes to training. I relate to them a lot. I’ve been through it and done it, but like I said everyone’s different. It’s the smart ones who’ll know to make the right choices.

Are you ever surprised by their stories?
Not really. We’ve seen a lot in our lives.

How does it affect you? Does it make you sad?
It doesn’t make me sad, I think you’ve just got to have the right mind-set and not be stupid. If you’re young you can get away with stuff but when it’s time to get serious you don’t want to be stuck behind bars or nothin’.

Some people do. Everyone’s different. I've got a lot of friends who … a lot of people I know prefer it.

Why would someone prefer life in prison?
You see it on TV, from watching the prison programmes. Some people are more comfortable getting things done for them. But I’m not.

How did you find prison?
I hated every minute of it. You’re missing life on the outside, so it’s not for me. Seeing my friends go through it, it makes you smarter and not want to be there.

How long did it take to put all that behind you? As soon as you got out?
Yeah. It’s just being smart and not wanting to make the same mistakes.

How old are you kids?
Fourteen, seven, and five. They don’t treat me differently no matter how much success I've had (laughs). I’m still “Daddy.” But I think I've got three really good girls. They don’t get in trouble. They’re all top in their classes and now I’m just looking forward to what they’re like when they’re older.

Do you have sympathy for their future boyfriends?
Yes! I’m sure all three of them are going to know how to behave … but imagine if one of them comes home crying!