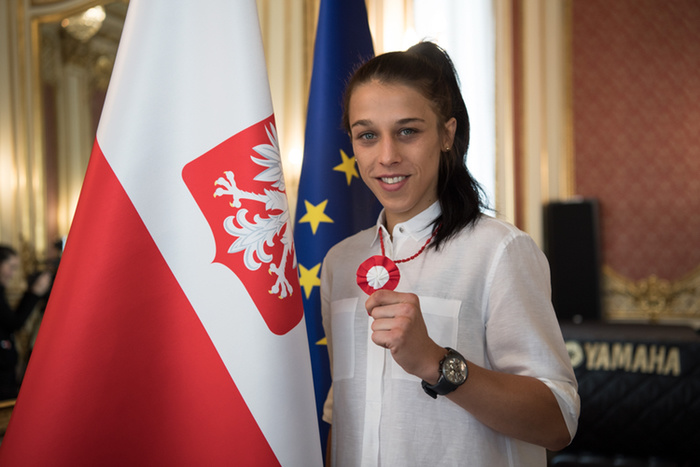 Since she first stepped into the UFC’s Octagon against Juliana Lima at UFC on Fox: Lawler vs. Brown on July 26, 2014, Joanna Jędrzejczyk has been one to watch on both sides of the cage in the promotion. Almost as entertaining—and terrifying—with a microphone or a gift in her hands as she is with 4oz gloves on them, the Muay Thai sensation-turned-long-reigning Women’s Strawweight Champion has become one of the UFC’s fastest rising stars since then thanks to her skills, her intelligence, and her charisma.

Part of what makes her so intriguing is that she brings the very same arsenal to the cage that she brings to the rest of her career. While she might not be quite as terrifying in interviews—she is, in fact, remarkably pleasant, polite, and engaging—she’s every bit as thoughtful, as smart, and as exacting when she’s talking to you as when she’s overwhelming the likes of Carla Esparza, Jessica Penne, and Claudia Gadelha. She executes her game plan, thwarts almost any attempt that might take her off her feet, and is thoroughly worth watching the whole time.

So when we talked to Joanna Champion for a My First Fight feature in the days leading up to her fight against fellow undefeated Polish MMA star Karolina Kowalkiewicz at UFC 205, we also her picked her brain about some other topics. Here is more of that conversation:

Fightland: In interviews leading up to this fight, you’ve been saying that we might see a new side of you at UFC 205. You’ve also specifically mentioned the Brazilian jiu jitsu training that you’ve been doing with American Top Team. Does this new Joanna have something to do with your evolving ground game?
Joanna Jędrzejczyk: I’ve been doing jiu jitsu for a long time. I got into MMA four years ago, and I’ve been working on my wrestling, but definitely the move to Florida, to American Top Team was probably the best decision in my career. I feel like I’ve stepped on another level, a better level. I’m more confident on the ground. I’m more confident in wrestling.

You know, changes are very difficult to make, but at the end, there’s always a good side to changes and definitely I’m very happy that I did this move. I can challenge myself, learn new stuff every day from the best coaches in the world. I can work with the top level sparring partners. There is so many good, good fighters in American Top Team in Coconut Creek. So I might be different in this fight, but let’s wait for the next year. I will spend more time with my new coaches in my new place at ATT, and I will become even more and more dangerous fighter and opponent for others.

You faced Karolina Kowalkiewicz in amateur competition and won via rear-naked choke.
Yes. I fought Karolina in 2012. It was an amateur fight, my first or second fight, and same with her, but it’s not important. I’m a different fighter. I became a UFC fighter, I became a challenger and I became a champion and I keep on defending my title and it is going to happen on November 12 at Madison Square Garden. Karolina, of course, I won with her a few years ago, but she’s different now. She’s got into the best MMA league in the world, so it means something. She won with Rose [Namajunas], who’s supposed to be my next challenger. So she’s good. She’s a good opponent for me. A good challenger for me, and it’s going to be a good fight. I want to put on a good show and I hope that Karolina is ready for that.

Even though you’ve both changed and accomplished so much as fighters since then, do you think there is any psychological advantage to holding that win over her?
No. I just want to win. My goal and my dream for the future is to be an undefeated champion. I want to retire an undefeated champion. Everyone knows it’s very difficult. We know how crazy it was this year for MMA champions. Just Demetrius Johnson and me, we are defending our titles. It’s not happened with the other nine champions of other divisions. So I’ve been working hard this camp and I want to make my dream come true. Being undefeated. 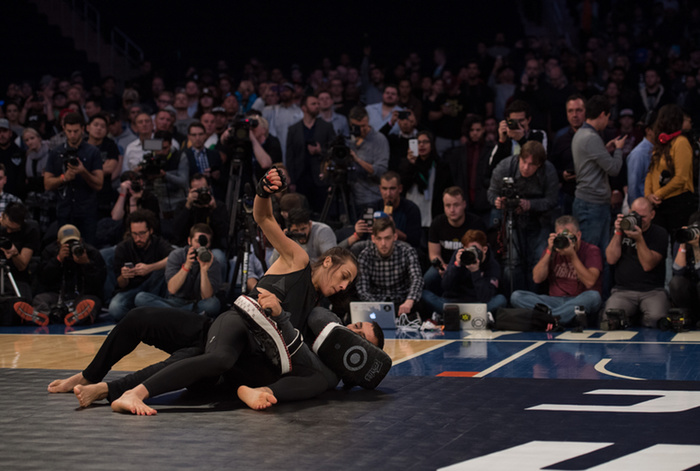 One of the things I love about your fights and the events leading up to them is the mental game that you play with your opponents, how you can psych them out almost as well as you pick them apart in the Octagon. How did you develop that, and how do you keep those skills sharp?
I’m not trying to play with them. I’m not planning the staredowns, the face offs, the gifts, which sometimes I give them. It’s just part of my job. We must be tough mentally and we must be strong, not just physically but mentally, as well. But I’m a hard worker. I challenge myself every day. I’m very hard on myself, so that’s why. When you challenge yourself every day, you’re becoming more and more confident person. You know there is no one who can break you. I’m not arrogant, I’m confident, because I know how hard I’m working every day.

Is there an advantage to being able to trash talk your opponent in Polish this time around?
I don’t like trash talk. People were surprised that I was talking to Karolina in English on our last press conference in New York. But come on, we’re fighting for the biggest organization in the world. And I’m not a Polish champion; I’m the world champion. I’m an international champion. So if you know English, speak English for other people who are there, like the media, your boss. But I don’t like trash talk. I feel like if I want to say something, I say it. I’m not trying to make trash.

In the past, you’ve discussed a potential move to 125 lbs if the UFC were to introduce that division for women. Is that something that’s still on your radar?
Before I got into the UFC, I used to fight in the 125 division. It was the same when I was competing in Muay Thai, so I didn’t have to make weight at that time. But I got into the UFC, where they have just two divisions: 115 and 135. I’m just too small for 135, so 115 was the perfect decision, the perfect move.

But I want to be happy. I want to be an athlete for a few more years. I want to be a mother. I want to be just a good partner and I want to stay healthy. So I must take seriously my body and my health, so the weight cuts are not… it’s dangerous sometimes. But I’m happy that I’ve been working with the perfect team for my fight. I have an amazing doctor, an amazing nutritionist who are taking good care of me. So now I see things differently. I said before that I wanted to move, that we needed the 125 division very quickly, because I want to be healthy and I want to take care of my body. But I think it’s like… I can cut the weight so many times and I can cut the weight for the next ten fights. But my dream is to be a champion in two different divisions.

I’m glad to hear that you’re taking care of yourself so well. Weight cuts are my least favorite thing about MMA.
Thank you. You cannot just think about today or tomorrow. We must think about our future, because today I am an athlete, but I can have a bad back injury or a bad accident and I’m not going to be a fighter anymore, so I must take my life seriously.

Do you have any opinion on Cyborg’s campaign to institute a 145 pound women’s division in the UFC?
She’s having some big problems to get to the 140 limit, so I think it’s a crazy idea for her to fight in 135. UFC brought her into the UFC, but there is no 145 division or 140, so definitely, they should make it for her. Because I think that there are more fighters who are around this weight, so it could be great. We need more female divisions in the UFC.

When you’ve been talking about wanting to be known as the best female fighter in recent interviews, you’ve mentioned that you might not be the prettiest or not “having boobies.” Have you felt any pressure or criticism regarding your looks over the course of your championship?
I feel 100% woman. I feel like I’m happy with my fiancé. So many times people tell me “Oh, you are part of a men’s business.” I’m not. I’m 100% woman. And I can be part of this sport. Sport is for everyone. We live in the 21st century. There are no limits for any of us. We can do whatever we want to do in our lives.

The thing is, I said that I don’t have to be the prettiest one. I don’t have to be the most good-looking girl in the UFC, but I want to make my career and I want to be remembered as the best fighter, the best athlete, the best champion. I don’t need to be fancy to be the best in the world. And this is what I mean. But I’m happy. I feel good in my skin and I’m happy. You can like me. Others will not like me. I don’t mind I have my people around me and I’m focused on that.

Around this time last year, you pretty content to allow Ronda Rousey to be the biggest star in the UFC and I think I’ve seen that start to change recently. Are you ready to be the #1 woman in the UFC?
(laughs) I’m the number one in the Strawweight division. But I think that Ronda, she has done so much for this sport, not just for female fighters, but for all of us, for the UFC, for all of the UFC fighters. She brought more MMA to the mainstream media. And, to me, she’s still one of the greatest. I’m very happy for her comeback and I wish her all of the best, even though she will face my teammate Amanda Nunes, who is the champion in the 135 division. It’s going to be crazy.

Would you like to take on some more of that mainstream attention yourself?
(laughs again) I can see what’s going on. I’ve been so busy with the media. Since I moved to the US, I’ve had more and more media obligations and I’m happy with that. I like to do this. I like this part of my job and I know it’s a very important part of my job. Of course, there is a time for training. There is a time for preparation. There is a time for a fight. But it’s our business to make this sport look good, to bring this sport even more up in the mainstream media.

The Tactical Guide to Jedrzejczyk vs. Kowalkiewicz and Woodley vs. Thompson