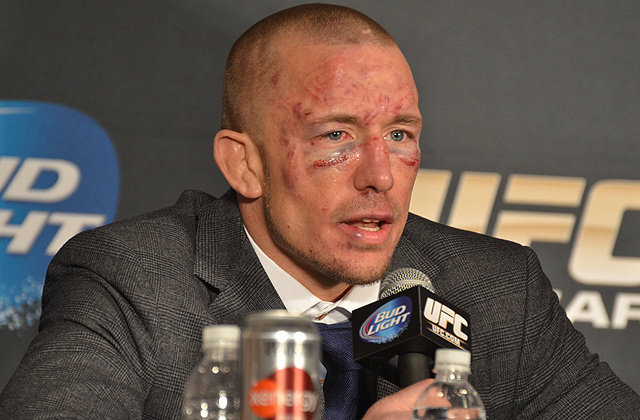 In this age of increasing knowledge and concern about the effects of concussions on the brains of athletes involved in combat and collision-based sports, there’s one phrase you don’t want to hear from one of those athletes right after a game or a fight: “I lost my memory a little bit …”

A phrase like that, even when spoken off-handedly and in the heat of the moment as it was by UFC welterweight champion Georges St-Pierre during his post-fight interview this past Saturday, should be enough to send shivers down the spine of any sports fan--conjuring up memories of Muhammad Ali and countless other former fighters reduced to muttering versions of their former glorious selves, not to mention football heroes like Brett Favre, who recently admitted that, after 20 years in the NFL, he can’t remember that his daughter used to play soccer.

Our love of sport comes at a price, and it’s right and good that we’re concerned and worried about the mental state of our favorite athletes, as long we can also acknowledge that our collective love of banging enterprises like MMA and football is probably not going anywhere--that the pain and suffering of athletes is a price we, and the athletes themselves, are willing to pay. To say otherwise would be disingenuous and the height of hypocrisy. We know what we’re getting into when we fall in love with violent sports, as do the players. So as long as those sports are going to linger, the best we can do is try to find a way to subtly and respectfully kick our favorite athletes out of their respective leagues as soon as they start showing signs of mental health or memory problems. I don’t know how it would be done exactly, but there must be a way to set a bar that says once you’ve demonstrated that you can’t remember things, your time is up. This is particularly important in MMA, where  one of a referee's main jobs is protecting fighters from themselves—which is to say from their refusal to acknowledge defeat even at the expense of their own well-being.

Yesterday on the Opie & Anthony radio show, UFC commentator Joe Rogan, who was the man doing the interviewing on Saturday when GSP admitted his memory loss, said the ominous signs were there a while ago for the champion, at least as far back as last April--if only we’d had eyes to see them.

Rogan’s probably right. I’m no neurologist, but it’s very possible that we as MMA fans willfully blinded ourselves to GSP’s early brain damage by chalking up his “missing time” and his run-ins with extraterrestrials to his eccentricity. We figured it was just Georges being Georges—the crazy Canadian with the awkward social skillset and an obsessive-compulsive relationship to training: Of course he believed he’d been abducted by aliens--GSP is a weird guy.

And who knows? Maybe GSP really does believe he’s been abducted by aliens. Maybe he really is that quirky. But if Rogan’s firsthand, long-simmering (he’s been following GSP up close for as long as GSP has been in the UFC) observations are true, and if, as he says, “Georges has taken more punches and kicks in the last three fights than any of his fights, ever; in fact, 50% of the shots that he's taken his entire career were in the last three fights,” then it may be time for GSP to go. I don’t know how you convince a professional athlete to hang it up, especially when the life of an athlete is all he’s ever known, but it would be nice to figure it out. Collective shaming, perhaps? Or maybe a surprise retirement party, complete with balloons, a cake, and a one-way ticket to some island paradise? I figure it’s the least we can do for those who suffer for our entertainment.