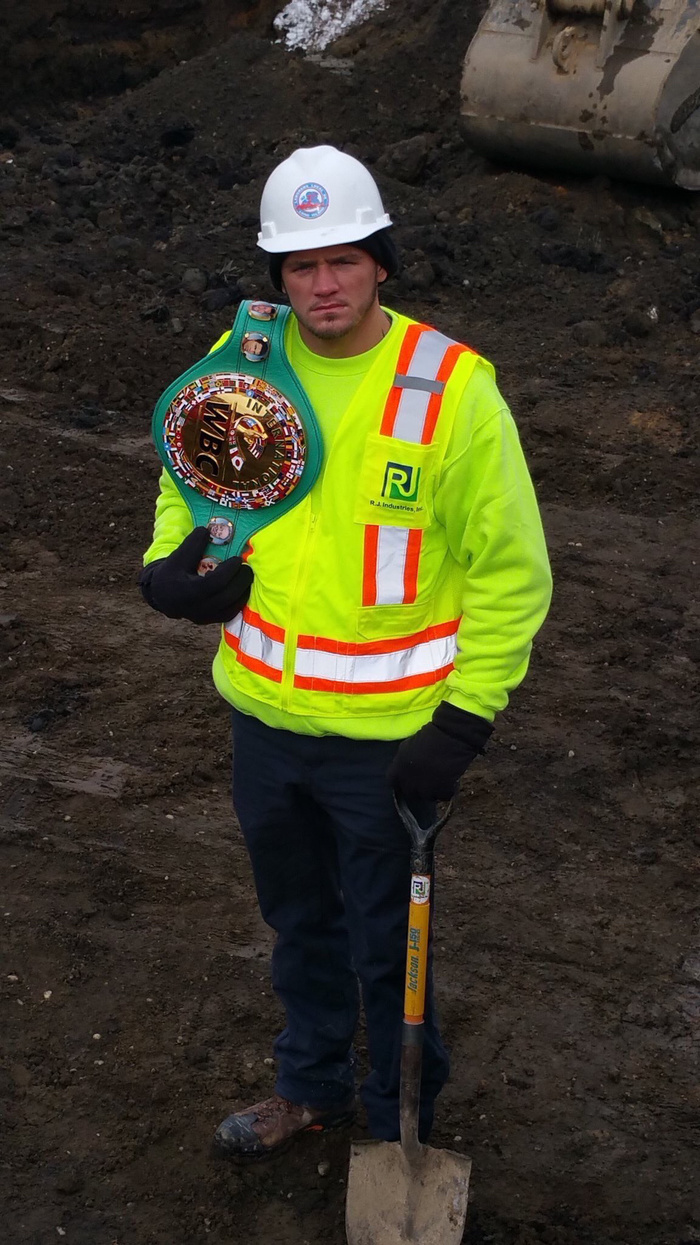 Joe Smith Jr. is a Long Island laborer and a member of the Local 66. The 27-year-old has a nine-year-old daughter, shares a Mastic, N.Y. apartment with his girlfriend, and when he works enough hours, qualifies for benefits, such as healthcare.

He’s also the guy who knocked boxing legend Bernard Hopkins out of the ring.

“I watch the video all the time on Facebook and YouTube, and I think, ‘Holy shit, that’s awesome,’” said Smith, a light heavyweight title contender with an impressive 23-1 record and 19 career knockouts. “It’s still is like, ‘Wow, I actually did that.’”

Say what you want about Hopkins being 51 last Dec. 17, when he fought his farewell bout against Smith, 24 years his junior. The longtime former champion was favored to win that night at The Forum in Inglewood, CA; and Hopkins had never been knocked out, let alone pummeled through the ropes and onto the arena floor.

Not even then-unified champion Sergey Kovalev—generally considered among the best boxers at any weight—could knock out Hopkins when the two squared off in 2014. (Kovalev won a unanimous decision.)

But even after what should have been a life-changing victory, Smith was back on Long Island to start the New Year, punching his time card and hoping to work enough hours so that he and his daughter could have access to affordable healthcare.

“I’m definitely not there yet,” Smith said of his financial situation. “I haven’t made it. I didn’t make that much the last two fights. By the time I pay taxes, I don’t have nothing.”

Smith did clear $140K for the fight. And while that’s a nice payday for someone who’s pushed a broom around a construction site, it’s well shy of Hopkins’s $800K purse.

The truth is that Smith, the WBC’s third-ranked contender and intercontinental champion, has yet to truly cash in on his success. After all, it’s only been in the last 15 months that Smith has gone from an unknown name on an undercard to fighting in a main event on HBO.

The first major step was unanimous decision victory over highly-regarded fellow New Yorker Will Rosinsky at Barclays Center in December of 2015.

“He’s got pop,” said Rosinsky, a four-time Golden Gloves winner and 2005 U.S. amateur champion who Smith has always admired. “He raises your eyebrows when you fight him. He can punch, he’s relentless, and he’s a good finisher.” 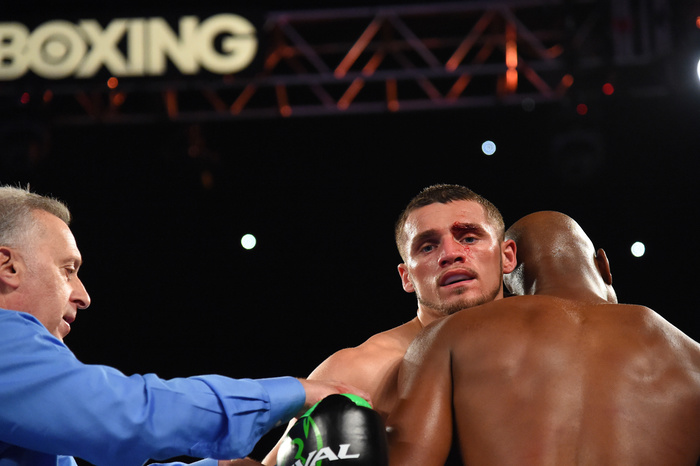 After earning an easy second-round TKO against Fabiano Pena last April, Smith got what turned out to be his big break in June: a chance to fight Poland’s Andrzej Fonfara in the contender’s adopted home town of Chicago.

It was supposed to be a warmup for Fonfara, who was looking for another title shot after losing a unanimous decision to WBC light heavyweight champion Adonis Stevenson in 2014.

But even though the Warsaw native was a heavy favorite following victories over Nathan Cleverly and Julio Cesar Chavez Jr., Smith’s father had already concocted a fight strategy around Fonfara’s Achilles’ heel.

“I had followed Fonfara his whole career,” said Joe Sr., a former bouncer and amateur boxer who introduced Joe Jr. to the sport when he was 13. “I knew when Fonfara let his hands go, he raised his chin up every time and left himself wide open.

“So in training camp, we told Joe, ‘As soon as he lets his hands go, you punch with him, and you’re gonna knock him out.’”

Joe Sr. was right. His son earned a first-round stoppage and perhaps boxing’s biggest upset of 2016 after dropping Fonfara twice with his explosive right hand.

Hopkins was less gracious than Rosinsky and Fonfara, falsely accusing Smith of pushing him out of the ring. And this was after he referred to Smith as “common” during the pre-fight press conference.

Regardless, Smith's eighth-round knockout of Hopkins should have been enough for a title shot—or so he thought.

“I’ll fight anybody,” Smith said. “I just want to get paid, make money, and become a champion.”

The problem for Smith is finding a champion willing to fight him.

In what might be boxing’s worst-kept secret, several sources confirmed that unified light heavyweight champion Andre Ward (31-0, 15 knockouts) is currently negotiating a rematch with Kovalev (30-1-1, 26 KOs).

That leaves the WBC belt holder, Stevenson (28-1, 23 KOs), who, as luck would have it, was looking for a challenger to fight on April 29 at the newly-remodeled Nassau Veterans Memorial Coliseum in Uniondale, N.Y. 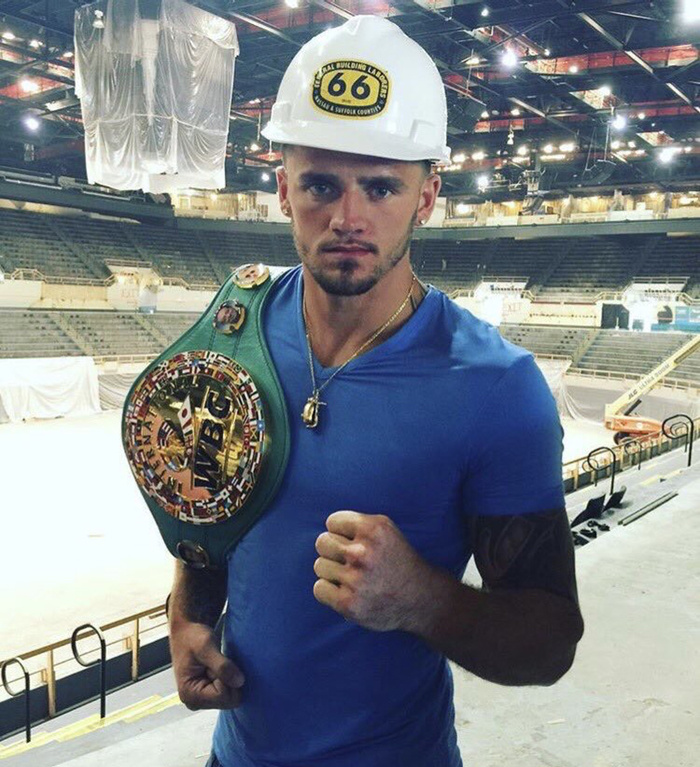 Not only did he grow up minutes away from the former longtime home of the NHL’s Islanders, but the Local 66 helped erect the Long Island landmark in 1972 and, more recently, contributed to its renovations. Smith, himself, helped construct the nearby Hofstra University dormitories.

What’s more, Smith’s trainer and co-manager Jerry Capobianco, used to work security at the Coliseum. His brother Kevin actually drove the Islanders’ zamboni. Another brother, John, fought there three times, including his 1979 loss to Richie Kates.

And as if those local ties and Smith’s recent success weren’t enough to secure a title shot against Stevenson, he also has a reputation as a reliable asset at the box office thanks to his loyal fans in the Local 66.

“They’re all proud because he’s one of them,” said Capobianco, himself a member of the International Union of Operating Engineers, Local 138. “They’re all over him really. You see a guy working and then you see him on TV. It’s like ‘Holy shit.’”

But this is boxing, and nothing so obvious and logical can ever come easily.

The details are predictably hazy, with boxing insiders pointing fingers on background while offering scant details on the record.

Stevenson’s promoter, Yvon Michel, did not respond to repeated requests for comment, but did tell BoxingScene.com that Smith promoter Joe DeGuardia was to blame: “[Stevenson is] not fighting Joe Smith because Joe Deguardia believes Joe Smith is the A-side fighter. He wants to control the arena, he wants to control the ticket sales.”

“There was absolutely no logical reason why the fight shouldn't have been made,” he said. “It had nothing to do with ‘A’ side-‘B’ side.  Adonis Stevenson versus Joe Smith Jr. would be a thrilling fight.

“Certainly the cards are in Adonis and his team’s hands,” DeGuardia added. “They have the title and can pick someone of lesser risk or choose to fight Joe. I respect Adonis. He is champ of the world and I will be the first to give him his props if he ever signs to fight Joe Smith Jr.”

Stevenson has fought only once in the last 18 months, and was even ordered by the WBC to face top contender Elder Alvarez (22-0, 11 KOs) before an agreement was reached allowing the Haitian-born Stevenson to first fight Monaghan.

So to suggest that the 39-year-old Stevenson is ducking Smith wouldn’t be far fetched, although Michel has denied that publicly.

“He could be,” Smith said. “You hear all kinds of things. I really don’t know.”

DeGuardia said he expects to announce Smith’s next fight in the very near future.

That’s significant because Smith has already taken off work to train as much as possible before a bout sometime this spring. And while that gives him a chance to spar against a few speedy middleweights in Brooklyn as well as 260-pound heavyweight slugger Adam Kownacki, it does leave Smith without his much-needed benefits.

“If I don't fight in April,” Smith said, “that’s a long time of me taking off from work.”

It’s a risk, but a calculated one. 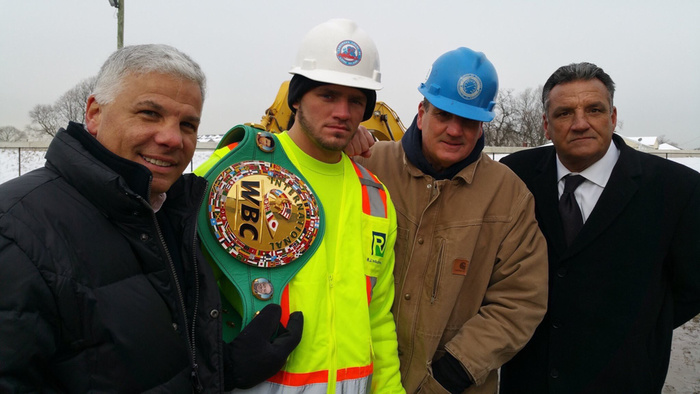 Reaching the top of the light heavyweight division is significantly harder for a part-time pugilist. Taking time off of work is the only way to ensure Smith will be prepared should an enticing offer suddenly present itself. And since boxing’s schedule is somewhat fluid, Smith has to take a few things on faith if he’s ever going to be able to realize his relatively modest dreams, like buying a house.

“That’s the holy grail right there,” Capobianco said of a title shot and the purse that would come with it. “Look at Stevenson on his Instagram. He’s got a Bentley, a Maserati. Joe never had a new car in his life. Right now he bought a 2011 Camaro. That’s huge. And that’s the best car he’s ever had.”

“I just got to focus on [boxing],” said Smith, who was driving an old Jeep Grand Cherokee until he beat Rosinsky. “This is the only way I can live the life that I want. I don’t want to get up every day and go to work when I’m 50, 60. I don’t want to work until I’m 70 before I can retire. I want to make my money now while I’m young.”

Smith isn’t complaining; he remains effusively gracious when speaking of his union and its support. But he also knows his title window won’t stay open forever.

This is someone who already overcome one major career setback in 2010, when Smith failed to keep his chin down against unheralded Eddie Caminero and had his jaw broken in two places.

So while Smith is still just 27 and can retire as the only boxer to ever knock out Bernard Hopkins, the rest of his career and life likely depend on avoiding a similar misfortune.

“I don’t want to be doing this past my mid 30s,” Smith said of boxing. “Trying to make the biggest fights possible now and get out of the business. You don’t want to stick around too long.

“I want to become champion of the world, but I really do need to make the money while I can,” Smith added. “This is what I’m basing my life off of now.”

A $50 Million Tournament Attempts to Change the Sport of Boxing