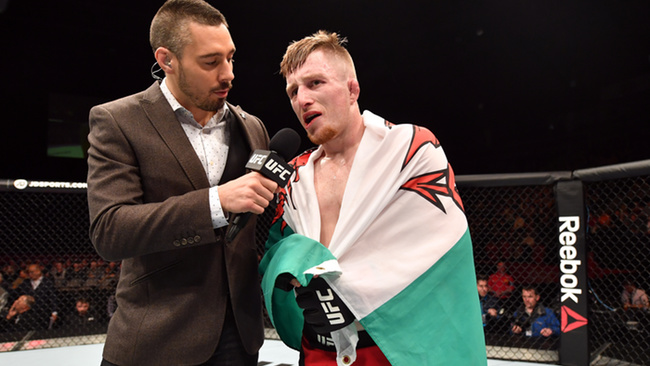 The small number of Welsh fans that traveled to Belfast two weeks ago had a big impact on the atmosphere at the SSE Arena, as Brett Johns and Jack Marshman provided the nation with a 2-0 UFC record from their first tests in the Octagon.

Like the Irish fans, the Welsh faithful sang songs synonymous with international rugby and soccer competition. Decked out in their red jerseys, it was easy to spot the Welsh around the stadium, who found a new level of volume when Johns and Marshman entered the Octagon.

According to Johns, who claimed the first Welsh UFC win against Kwan Ho Kwak on the night, the support has remained strong ever since the event.

“The Welsh support has been there from the start,” said Johns. “Obviously, it meant a lot to me to get the first call-up to the UFC for the Welsh, because everybody saw that video of me crying like a baby when I got the news that I signed—it ended up going viral!

“Back home, the local scene was going bananas. I was just walking in Cardiff the other day and I had people stopping me in the street congratulating me. I never really got that back home before. I’m really enjoying the journey.”

Unbeaten bantamweight Johns managed to make even more history on the night by registering the record number of takedowns in one round for his weight class, with eleven. A lifelong Sean Sherk fan, it was no surprise to the former Cage Warriors and Titan FC champion that ‘The Muscle Shark’ occupies the spot just ahead of him, in second place, for the most amount of takedowns registered in any weight class in a single round. 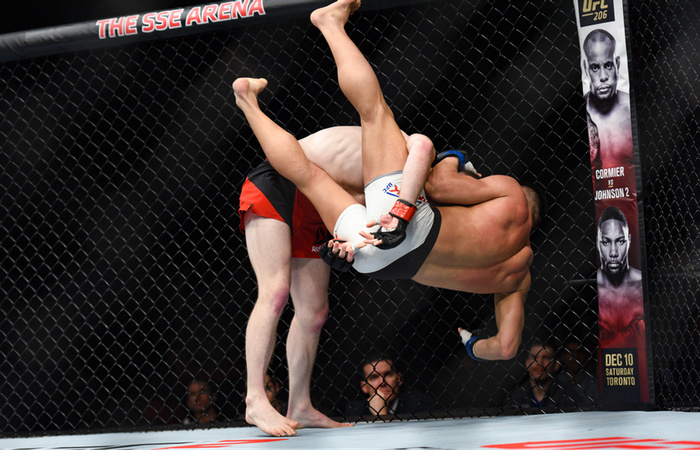 Johns admitted that he was given a boost on by the vocal Welsh support in Belfast during his record-breaking performance.

“Midway through the second round I started to hear them sing ‘Don’t Take Me Home,’ it’s actually a song I love to sing myself when I’m watching the football so that really spurred me on,” he explained.

“The thing is, the Welsh are always that passionate when they’re supporting athletes from the country. I’ll die with that memory in my head. I’ll never forget about it.”

After his fight, Johns got to meet European superstar Conor McGregor, who sat Octagonside on the night to see his teammates Charlie Ward and Artem Lobov compete. The bantamweight believes McGregor has reinvigorated the European scene and hopes that Wales are capable of having a similar impact on the UFC as the Irish have had.

“McGregor has done wonders for us over here in Wales. He’s brought the Celts back into it. Some people like him, some people don’t like him, but I met the guy on Saturday night and he’s absolutely brilliant.

“He was very respectful to me, and that’s what I love about him. Some people might give him some stick about his antics outside of the Octagon, but I think he’s an inspiration for all of us on this side of the pond.

“Do I see a similar thing happening in Wales? Definitely. I think we have the right guys for the job.” 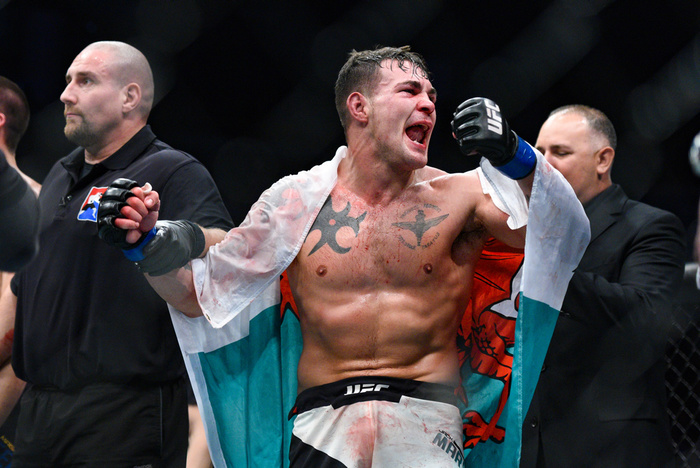 Marshman had a perfect debut in Belfast. The fans in attendance roared on in support as he banked a second round knockout over Swedish striker Magnus Cedenblad. To top it all off, Conor McGregor endorsed Marshman for a ‘Performance of the Night’ bonus during his post-fight interview, which he received at the post-fight press conference.

The middleweight echoed his countryman Johns’ aspirations for the Welsh in the UFC and highlighted the strength of the talent pool that exists in their nation.

“We’ve got a massive amateur scene and we have a load of really good pros that are ready for the call-up now,” claimed Marshman. “Within the next 18 months, I expect to see the same thing as we say with the Irish.

“As soon as McGregor got in he opened up the door for a lot of other guys from Ireland to get signed, and I really think there will be the same kind of influx in the Welsh ranks as the Irish had. We have the talent, all we needed was someone to open the door.”

One of the Welsh front-runners to get the next call-up from the UFC is John ‘The White Mike Tyson’ Phillips, who interestingly called out Marshman as a way to see himself secure a debut with the promotion.

“If the UFC want that fight they can have it. I don’t have a say in who I fight so if the UFC say Phillips will be my next opponent, that’s fine. This is a guy who hasn’t even made weight for his last two fights. When you look at my last six opponents I think what I have achieved is on a completely different scale.

“I’m not running away from him, I’m already here. He just needs to get signed and hopefully, UFC will put that fight together.”

The only potential problem with UFC hosting an event in Wales is the disparity in the size of the venues that could host one of their cards. As explained to me by Ian Dean, Cage Warriors matchmaker, after the 75,000-seat Millennium Stadium, the next biggest venue in Wales is the Motorpoint, which only seats 5000 spectators.

Johns believes the only way to fill the Millennium stadium would be bringing in someone with star power like McGregor’s, but he is optimistic about an arena being built that would suit the requirements of a UFC Fight Night card.

“It would be absolutely amazing if they could put it together. I wouldn’t care where I was on the card, once I got to fight on it, that would mean the world to me.”

Marshman is confident that the Welsh could have a very memorable UFC event based on the outpouring of emotion he has seen on social media feeds since his and Johns signing.

“It would be massive if the UFC came over here. Take a look at the reaction the Welsh had on social media when we were signed and then after when we got the wins, it was crazy. I think if we keep getting a big reaction like that, UFC will start to look into it even more. They could sell out any venue that they want to put us in.”