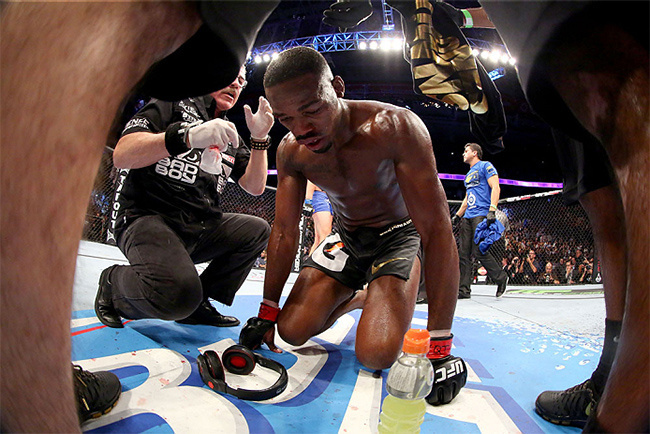 If anyone ever doubted that by-proxy experiences can be as emotionally draining as the ones we feel firsthand then let me offer this past weekend as evidence.

After sitting in front of my television (an act criticized by all manner of moralists as the height of modern passivity) and witnessing first the Jon Jones/Alexander Gustafsson fight on Saturday and then the second-to-last episode of Breaking Bad on Sunday I was as emotionally mangled as if I'd just fought for 25 minutes or learned that my only son wishes I were dead because I didn't do a great job of not killing his uncle. But since this is an MMA site and not a television site, and since you can’t throw a rock on Google without hitting a review of last night’s Breaking Bad, I’ll stick to what I know.

Let’s begin at the end: Minutes after Jones won a close and controversial five-round decision over Gustafsson in what was one of the greatest fights in MMA history, UFC cameras caught Jones—a big cut over his right eye, his lips swollen and marred—leaning on his trainers as he limped his way through the backstage area of the Air Canada Centre toward his dressing room, and eventually the hospital. It felt like a public viewing of an almost unbearably personal moment, and it should have been one of those times when I felt lucky that I wasn’t the person I was looking at. Instead, I felt envy.

Maybe I should have felt envious of Jones long before then. Any decent American should be desirous of the champion’s fame and money. But fame sounds to me like a fate worse than death (who wants to be recognized at the grocery store?), and money has never been a thing to consume my mind; I don’t want a lot—I just want a little bit more than what I have at any given moment. So I didn’t feel jealous of Jon Jones until I saw him dragging his weary, broken body down that lonely hall, a dead look in his eye, either oblivious to the pitying souls surrounding him or dying to be rid of them. Because it was in that moment—after a five-round fight that seemed to push both fighters to the brink of sustainability, as if their bodies might just break apart at any moment (“Closest thing to dying that I know of,” Muhammad Ali said after his rubber match with Joe Frazier)—that Jones was experiencing true and mysterious, something that few of us will ever have any inkling of. At that moment I envied Jon Jones the depths of his experience. Even at death’s door, he looked more alive than I have ever been.

There are some rare sporting events, just as there are some very rare TV-show moments (“Where the fuck is Wallace?”), where we as spectators can actually feel as much as the participants. And that's why I keep watching MMA: for the rare moments when the door swings wide and the line between participant and viewer blurs almost completely, when the emotional and physical magnanimity of a fighter drops, like Shakespeare’s mercy, on those beneath, blessing both “him that gives and him that takes.” Watching Jones, I was reminded of why I started training myself, of my desire for the immediacy of that kind of experience, unmediated and unfiltered and entirely of the moment—mindfulness of the best kind.

Despite the pain he was suffering, or because of it, Jon Jones--a man who, for most of his adult life has been a walking billboard, an advertising construction, who has to watch his words and choose his affiliations and mind his manners to fit the whims of mysterious and unnatural market forces, a man whose sincerity and even humanity have been doubted at every turn—showed himself to be a true human being, exposed and seen by all. You could see it in his eyes and his walk: Even for this perfect athletic and marketing specimen, it was impossible to hide what he was going through. Still, I’d be willing to bet Jones has never felt more right than he did in that moment—more right even than when he won the belt or got that Nike deal or counted his first million.

And Jones tweeted as much on Sunday: That was just what I needed. That’s the same Sunday, by the way, that a broken, lonely, cancer-riddled Walter White dragged his miserable ass to a bar in nowhere New Hampshire and made the decision to delay death in the name of revenge, in the name of fully realizing himself, good, bad, or truly awful--in the name of life. Because the realization of the self is the only thing of any meaning out there that I can see. That feeling of momentary transcendence—not the belt, not the money, not the Gatorade advertisements—is what you paid for with all that blood, Mr. Jones.

Junior Dos Santos Lets Us All the Way In

Sweet Pain With Jose Aldo and the Korean Zombie