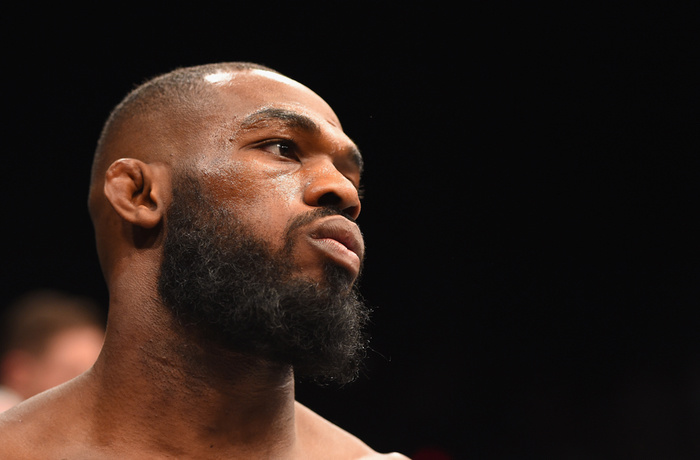 On Monday the Nevada State Athletic Commission announced that they had issued Jon Jones a temporary suspension pending a full hearing related to the former UFC light-heavyweight champion’s failing of an out-of-competition drug test ahead of his scheduled title fight on July 9. The announcement of Jones’ violation came just three days before UFC 200, sending UFC matchmakers scrambling to find a new main event for what was being hyped as the biggest card in the promotion’s history. The commission voted unanimously to issue the temporary suspension. The full hearing will likely take place in September or October, though the date is still to be determined.

The NSAC also revealed the names of the banned substances Jones tested positive for. The first was hydroxy-clomiphene, an anti-estrogenic agent, and the second, letrozole metabolite, an aromatase inhibitor. Both are in the estrogen-blocker family and commonly used to reduce estrogen production and stimulate testosterone production following the use of anabolic steroids. Aromatase inhibitors, which are prescribed to treat breast cancer in postmenopausal women, can also be used “off-label” to reduce the conversion of testosterone into estrogen.

Now that the name of the substances is out in the world, Jones is stepping up his defense (first floated at a teary-eyed press conference the morning after the initial announcement) that he is nothing more than the victim of a tainted supplement or two that failed to include the banned estrogen blockers on their list of ingredients. Following the NSAC hearing Jones took to Twitter to say that he had already “sent products to a lab” for testing and that he has “nothing to hide.”

“Not trying 2 come across as a victim if anything Im (sic) a victim of my own ignorance & yes this could've been prevented,” Jones wrote early yesterday evening. “Don't write me off just yet, I know in my heart that I'm not a cheater. I trust in the system to help me prove it.” USADA will now likely test the supplements Jones was using to see if they in fact contain those banned substances without listing them as ingredients.

The tainted-supplement defense is the go-to maneuver for athletes popped for anti-doping violations, and as skeptical as we sports fans can get, especially when it comes to fighters who have burned us before like Jones, in the unregulated world of nutritional supplements it isn’t hard to imagine banned substances making unannounced appearances in otherwise kosher products.  In April, for example, UFC middleweight Yoel Romero got a light six-month suspension for taking a banned substance that stimulates growth hormone release after USADA tested the supplement Romero was taking and determined that the banned substance did appear even though it was not listed on the label. And last month Tim Means settled with USADA using the tainted-supplement defense after the UFC welterweight tested positive for Ostarine, an androgen receptor modulator that prevents some of the unwanted side effects of anabolic steroids, ahead of his fight with Donald Cerrone in February.

Speaking of Mean, Jones has retained the services of Means’ lawyer Howard Jacobs, a California-based sports attorney who focuses on defending athletes popped for doping violations. The welterweight was looking at a two-year suspension but with Jacobs’ help was able to convince USADA that a tainted supplement was to blame for the presence of the modulator in his blood, and the suspension was reduced to six months, retroactive to February 3.

Jacobs’ record as a lawyer for fighters is mixed. His defense of Means was heralded as a victory for fighters victimized by unregulated supplement companies, but Jacobs couldn’t convince the California State Athletic Commission to overturn then-UFC lightweight champion Sean Sherk’s positive steroid test in 2007, though he did get them to reduce his suspension by half. And his client Alexander Shlemenko, the former Bellator middleweight champion, was suspended for three years back in June 2015 following a positive steroid test.

Still, Jacobs is the guy you want when USADA knocks on your door, and the fact that Jones has retained his services is proof that he won’t be taking any punitive action from USADA or the UFC sitting down and that he’ll likely be employing the Jacobs-custom tainted-supplement defense to clear his name. Which he might just do. But even then the real question will remain: Why in the world an athlete as successful as Jones, a man who was looking at a “eight-figure payday” at UFC 200, and who has a team of managers, PR flacks, nutritionists, and coaches on his side, would risk everything he’s worked for by taking a supplement that hasn’t been confirmed by an army of scientists to be pure as the driven snow (real snow, not the other kind). It’s a mystery we may never unravel. Jon Jones is a mystery we may never unravel. It’s become clear that his athletic genius is matched only by his capacity for self-sabotage and self-delusion. No psychologist could ever hope to plumb his depths.