Jon Jones Was the Biggest Winner at UFC 196 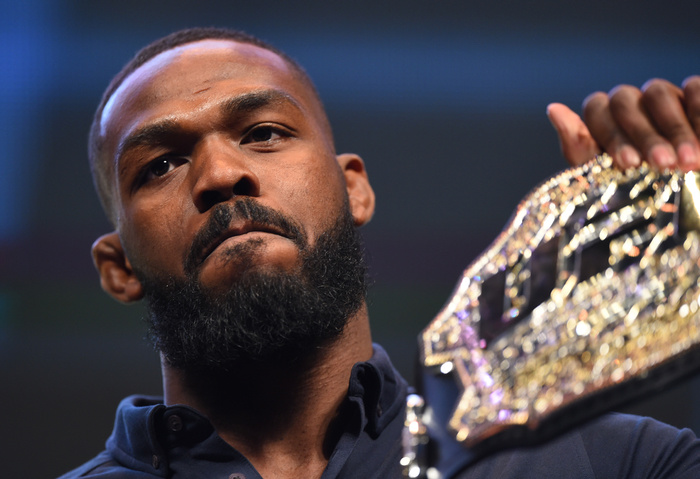 The audience’s reaction to Jon Jones appearing at the ‘Unstoppable’ press conference on Friday confirmed that the dethroned light-heavyweight champion is more popular than ever despite his colorful exploits over the last year. Jones got a massive ovation when he appeared at the blockbuster press conference with his own, now illegitimate, title.

It seemed as though Daniel Cormier, who defends his title against ‘Bones’ on April 23rd at UFC 197, was taken aback by how well the controversial light-heavyweight was received. ‘DC’ seemed to struggle with the fact that the boos were aimed at him instead of Jones, given his checkered past.

“As I address these people in here, I haven’t done all these things. I haven’t wrecked my vehicle. I haven’t been suspended. I didn’t get stripped of my championship. I didn’t do all those things. These are normal things that adult human beings do.

“You cheer this guy for saying he’s not going to do these things anymore. I have done this my entire life, but you boo me. Thank you. Thank you.”

Not that it was his appearance and the ‘Unstoppable’ press conference that made Jones one of the biggest profiteers from UFC 196, but it certainly underlined the fact that he is still very much a fan favorite.

The real reason that Jones gained so much from the event at the MGM Grand Garden Arena was because another two of the UFC’s draws, Conor McGregor and Holly Holm, took defeats, which makes Jones’ record look all the more impressive. It’s quite baffling when you think about the amount of the big UFC stars that have been beaten over the last while, and of course, this all works in the favor of the returning ‘Bones.’

November saw Ronda Rousey taste defeat for the first time when Jones’ teammate Holly Holm head kicked her out of consciousness in the second of their meeting in Melbourne.

A month later, Paige Van Zant took a horrific beating at the hands of Rose Namajunas in their five round epic at The Cosmopolitan. Regardless of the unwavering heart Van Zant displayed on the night, the defeat certainly halted her rapid ascension through the UFC ranks.

Following on from Van Zant’s loss, the MMA world turned their ridicule over to 19-year-old Sage Northcutt. The young lightweight came under a lot of fire when his purse was promoted up to $40,000 show and $40,000 win following his debut win over Francisco Trevino. After his new figures were revealed following his sophomore UFC outing against Cody Pfister, many targeted Northcutt, including Aljamain Sterling, who couldn’t understand why such a fledgling talent deserved that kind of money. His eventual loss to Bryan Barberena opened the floodgates in terms of fans and fellow fighters taking pops at Northcutt.

Conor McGregor could’ve had a genuine claim to the metaphysical pound for pound rankings had he won on Saturday night.

“He’s not,” replied McGregor when he was asked if Jon ‘Bones’ Jones was the number one pound for pound fighter on the UFC’s books. “I’m number one, two, three, four, five, six, seven, eight, nine,” said the Irishman. “Maybe Jon and Mighty Mouse is 10. That’s what I feel.”

Even the most diehard of McGregor fans wouldn’t deny Jones his top ranking in the sport following Saturday night’s defeat. Although Jones initially took to Instagram posing with Demetrious ‘Mighty Mouse’ Johnson and poking fun at McGregor’s pound for pound comments, today he has come out in support of his pound for pound rival, McGregor.

“I wanted to take a quick second to shout out Conor McGregor for the way he handled defeat last night,” said Jones in an Instagram video. “He really handled it like a champion. You know, he took a gamble, fighting anyone, anywhere. It was a gamble he lost, but in a way he won because he really got to show some great character. So, shout out to you.”

With another victory over Cormier next month at the MGM, Jones could be one of the biggest attractions going into UFC’s marquee show in July. With McGregor, Holm, Van Zant, Northcutt and Rousey all coming off losses, it is likely that Jones’s first title defense would take pride of place at the top of the heavily anticipated card.

Jones is also likely to underline his claims to the pound-for-pound status should he remain in the win column. Despite UFC cutting him short of beating Anderson Silva’s record of consecutive title shots when they suspended ‘Bones’ after his hit and run incident in Albuquerque in April last year, Jones has gone on record saying that we is likely to step up and test out the heavyweight division after three more wins as a light-heavyweight.

While it isn’t necessarily needed to establish him as the pound-for-pound best fighter on the UFC roster, if he managed to claim some scalps as a heavyweight he would almost certainly be heralded as the greatest fighter MMA has ever seen.