Jonathan Brookins Is Leaving for India 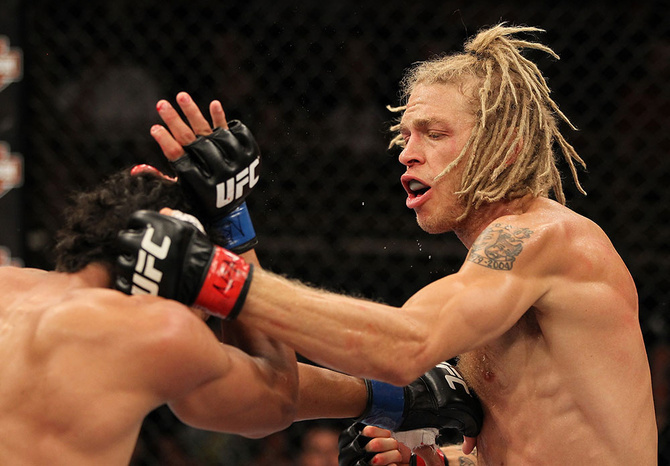 Up until about the third minute of his fight last weekend in Las Vegas, UFC featherweight and Ultimate Fighter winner Jonathan Brookins was actually beating up Dustin Poirier. This seemed to surprise pretty much everyone, including Jonathan Brookins. Not because he didn’t believe he was capable of beating Poirier but because he didn’t want to be fighting at all. Walking into the Octagon that night, his mind was 1000 miles away -- or rather 8000 miles away – floating through the ether.

Next month, Brookins will be traveling to India on a spiritual quest, and he doesn’t know when, or even if, he’ll be back. After winning the Ultimate Fighter in 2010, Brookins has been on something of a downward slide – going 1-4 in the UFC, losing his house in Orlando after most of his money had run out. Since then he’s bounced around from couch to couch and gym to gym, searching for something. Now that his fight with Poirier is in the past, Brookins feels free to go searching outside the world of mixed martial arts. This made us curious, so we called him recently at his home in Orlando, where he’s getting ready for his next, more spiritual, journey.

Fightland: So you mentioned having to sell your house. Is it hard to make a career in MMA, even when you’ve made it to the UFC?
Jonathan Brookins: It’s not hard to make a career in the UFC. If you really want it, you can make it happen. I think I just talked myself of really wanting it. I don’t know if I talked myself out of it or if I really don’t want it anymore. That made it tough to keep going and to fight last weekend. I didn’t really have much fight left in me. I kind of hit a dead end.

Were you in the Octagon thinking about India?
I think I was. I think I was ready to go to India and learn something else. Pursuing this sport with the mindset that I have is counterproductive. It didn’t make sense. Mindset is everything. If this is what I’m going to do with the rest of my life it can’t just be a circular argument. It can’t just be about nothing. This quest to be a fighter has gotten to be frivolous, to be the wrong pursuit. I know it can be pursued the right way, but I know I'm not anywhere close to it. I’m not really down to live this temporary, right-now way of life.

What are you looking for?
I’m looking for a mindset to exist better. I think that I can find a happiness about myself, a way of living, where my constitution is more sound. I think that martial arts has been a positive, but it hasn’t been as much as it could be. I want to find martial arts for real. Yoga just seems to me like one of the oldest forms of martial arts. It seems like the very beginning. When the Shaolin monks wanted to learn to fight, there was a yoga teacher who taught the monks how to exercise and how to defend themselves – how to properly prepare themselves, prepare their bodies, prepare their minds. So starting with yoga just seems so natural to me.

I want to say something with my fighting. I want to find the truth. We have the potential for greater consciousness. I want to abstain from this world and tap into the human soul and see what it’s like to live.

You said you learned some lessons during the run-up to the Poirier fight.
There were real heavy lessons. Sometimes you lose a fight and you have to go searching for the lessons. Maybe you go on a long run and you’re running the fight through your mind a million times – why did this happen? -- and then after a lot of soul searching the answer hits you. But this one was just loud and clear. Before the fight I came in a little bit overweight. Mostly because I was bounding around a lot – living in Oregon then New York then Montreal. But everything was real sporadic. So I was cutting weight, and I went to a bikram yoga class, something I do all the time. This was Wednesday, and the weigh-in was Friday. I started to get real dizzy after running that morning and sitting in a salt bath and then the yoga class. I got dizzy like I was going to pass out. By the end of the class, I was cramping up. My feet were cramping. By the end of the class I think I hit severe dehydration. My legs cramped up really bad. I couldn’t move. I was exhausted, like I was going to die. My neck, back, and chest all cramped up. I felt tired and weak. I started throwing up all night and was real sick.

I thought about quitting the fight. I was dehydrated, but I still had six or seven pounds to lose. Everything was all off. So I was asking myself, “What do you really want out of this experience?” And all I could think about was going to India. You already know you fucked your body up; there’s no way you’re going to recover fully in just a couple of days. Why would I go ahead with the fight instead of asking to reschedule? Then I thought about going to India in January. That was loud and clear.

At the weigh-ins, I could see myself on the Jumbotron. I was like, “Shit man, you look kind of pathetic. You don’t look like you’re ready to fight; you look skinny.” The kid (Poirier) walks up to me after the weigh-ins and gets in my face and says, “I want it more than you.” All tough guy: “I want it more than you, bro.” I was like, “What the fuck? How does this kid know he wanted it more than me?” It was an interesting thing to say but it was really true. It was the weirdest true shit-talking I’d ever heard in my life. Usually people just talk shit and you’ve got a rebuttal. That was the first time it really made me think.

Ideally, will India help you get back to fighting or are you open to the idea of not fighting again, if that’s where your mind goes?
Yeah, I’m open to that, that’s for sure.  All the things I didn’t learn in fighting to better myself I feel like I can explore in this avenue. If it means extra effort or extra solitude, I’m going to pursue this harder than I even pursued fighting. I feel like it could make me a much better fighter, but if it leads me to not fight again, I think I would be okay with that.

Are you optimistic about the future?
I am. It’s all mindset now. I know that nothing’s going to go wrong because I have the gift of this mindset this kid (Poirier) gave me to win. All he had to do was tell me he wanted it more. That’s easy enough; I can want a lot of things. And I know the formula to make it happen. And this is just a step to helping me live that lifestyle. If I want to come back and be the greatest fighter in the world, I have the lifestyle that will allow me to get things I want. That’s want I want to gain over there in India.