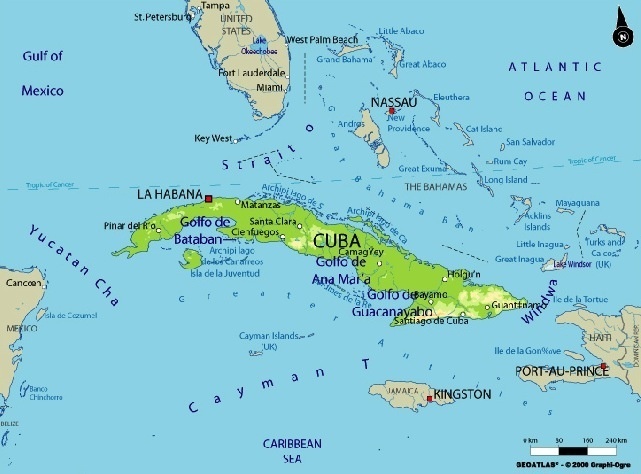 Growing up in Miami, Jorge Masvidal learned two things: Cuba was a place worth loving, and it was a place worth leaving. He listened to his father talk about escaping to south Florida before the wave of Cuban refugees, and he listened to his relatives talk about how great the parties were back on the island. He watched his idols take Olympic gold in the boxing ring, and he later found out just how hard the athletes had it under Castro. Despite loosening travel restrictions, Masvidal has yet to visit his family’s homeland. All he knows of Cuba come through the stories. Here, the UFC lightweight shares a few of them.

My dad was a fisherman. Not really a fisherman—he was just a boy. What he used to do to make money was go deep-sea diving with a spear gun and just grab fish and bring them back. His family was decent—they weren’t rich. His dad was a bus driver. They were getting by and living fine. Then the whole communism thing came, and the little bit they had got taken away.

My dad is one of the craziest dudes. I was like, “Man, what would make you pick up and go at the age of 14?” And he said, “They were gonna tell me what my favorite color was gonna be, and who and what I was gonna be, so I decided to go.”

He deserves a book on how he got to the United States. It was him, a good friend of his, and his friend’s uncle. You know the big tires for tractors? They built a raft out of those. What they did was take a gallon drum, fill it up with water, and tie it to the raft. But somebody messed up and one of the tanks of water wasn’t wrapped up right, and it just got fucked up with saltwater, so their drinking supply was over with. But picturing my dad leaving at 13, 14, leaving with two guys that weren’t even family—I don’t think they planned too well, you know? I think he was just like, “Oh, it’ll probably take us a day to get there,” and before they knew it, they were lost at sea.

I said to him, “For real? You ate that thing?” He said, “Yeah, we were so damn thirsty, three days out there in the sun. I drank the blood. I bit right into the raw meat.” I was like, wow, that’s fuckin’ survival.

They ended up in the Virgin Islands, and from the Virgin Islands, they brought them to the USA. He didn’t have family here. The government set him up in project housing, and they’d send him up to school. He told me he went to school for a day or two, and he couldn’t hack it: Everyone was speaking English, he was in a black neighborhood, and nobody knew Spanish. He was getting into fights everyday. And school was super-tough—he said the teachers wouldn’t pay him any mind, and nobody spoke Spanish. So he was just like, “Fuck school,” and one thing led to another.

My dad’s pretty fuckin’ nuts, man. He did about five years in California for manslaughter, and then over here in Florida, he did about 18 years in prison for drug trafficking. So he led like a completely different lifestyle than me or than most people. He got here at 14 and literally didn’t have any direction—he was here for a couple months, he relocated to California, and he was just into making money. The only way he knew how to make money wasn’t the right way.

When I was a kid the older ones would be playing dominoes, just talking shit about Cuba, this and that. They’d also bring up a lot of good things, like, “There’s never a party like a party in Cuba because you’re dancing all night, you’re drinking the best rum.” But then you’d hear all the political stuff, like how crazy it was that they’re gonna tell you how many eggs you’re allowed to eat in a week. Legally—like you get eight eggs a week. They’d say, “This is your salary.” And if you ever did wanna buy a TV, they basically make it impossible. Over there, you have to hustle—you have to do things the wrong way to get ahead in life.

A couple of my friends—I won’t mention their names—they were on the Cuban wrestling team. And when their buddies from whatever country came over, how they’d make money is by taking these guys around and introducing them to girls. They’d charge a flat fee and say look, “She’ll stay with you for, like, a week.” They have to do shady things because the only people that make money are the government—the people that already got the money.

A lot of my friends are part of the national teams, and especially if they grew up in the Cuban system of sports, it’s completely different than how it is here. My good friend Alexis Vila is a three-time world champion and Olympic bronze medalist. He told me he got recruited when he was a kid, and within a few years, he was no longer living with his parents. He was at a special school just for wrestling Monday through Saturday, and they’d release him on holidays and every other weekend. And it was like that all the way until he defected. It was just wrestling every day—nothing else but wrestling.

Alexis told me that they had two different lunchrooms: for the A-level athletes, and the Bs. If you were an A-level athlete, you would get special vitamins; when the new gear would come in, you’d be the first to get it; and besides getting to travel, you’d get everything better. But not too far away, on the B team, you’d sit down and your food wouldn’t be the same as the A-level guy. Your vitamins weren’t the same, or you wouldn’t even get vitamins. You’re seeing all of this growing up, and all you’re thinking is “I gotta be number one or nothing,” you know?

Our food is not healthy. You can’t come to Miami when you wanna keep your diet or nothing because everything’s fried. Everything’s bad. But you get rice and beans, some pork chops, some fried plantains, we’ll get avocado with it, a milkshake, and that’s a meal right there, man.

It comes down to the basics. If you order rice and beans at a place that’s known for making good Cuban food, and that rice and beans is not mind-blowing, it’s a fucking problem, man. It’s a lot of pride and love when they make their rice and beans—it takes them hours. They’ll have that rice boiling at low for a good two or three hours, getting all the seasonings, getting that rice nice and fluffy. And the beans—I remember my grandma cooking and it would take her hours to get the beans done. She’d put all these things in it—I think there might have been mint leaves or something like that--she’d put pieces of meat in there, she’d put in all types of peppers, and it would literally take her two or three hours just to get the beans done. But when it gets served up, it’s mind-blowing.