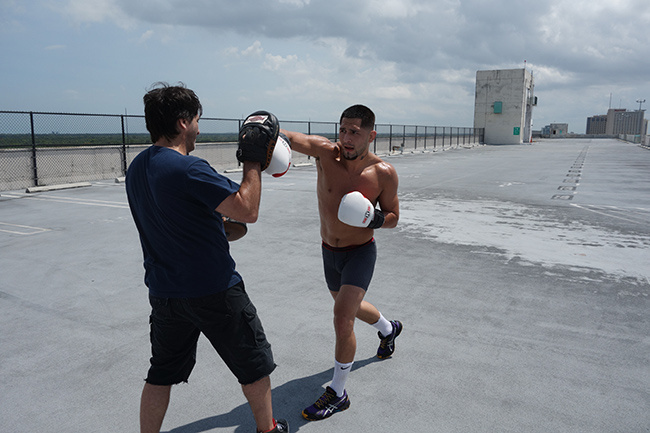 Jorge Masvidal guided his black Cadillac CTS through the one-story sprawl of West Miami, pointing out landmarks. A drive-through grocery store that stayed open late into the night. A Family Dollar. The Disco Fish Market & Restaurant. A Cuban bakery that serves the best pastelitos around, oozing melted cheese.

It was Saturday afternoon. A pair of mini-boxing gloves decorated with a Cuban flag motif dangled from the rearview mirror, a tiny American flag on a stick protruding from one. Masvidal’s friend, Isaac Kesington, rode shotgun. The backseat was strewn with workout clothes piled next to the pink car seat of Masvidal’s 4-year-old daughter, now occupied by a Barbie doll. The digital temperature gauge on the dashboard ticked between 91 and 92 degrees. Masvidal bounced to a Buju Banton beat:

Masvidal rolled through the neighborhood where he lived from about age 7 to 14, the road lined with palm trees and low-slung beige apartment buildings. “Right here alone, I don’t know how many heads I cracked,” he said. “All these apartments, there were a lot of chicks, everybody would walk around.”

On the right, he pointed out his elementary school.

“This kid tried to rob me once, right over here,” he said, a little further on. “He was like a little older. I remember I was walking and he was, ‘Hey, come over here, let me ask you a question.’ Got close, he grabbed my shirt. Had a little knife …”

Masvidal’s memory was interrupted as he pulled to a stop outside a five-story, orange and yellow apartment building. He looked up at it through a tall, white iron fence. “We used to live in that corner,” he said, pointing to the left side of the building. “Fifth floor. It sucked when the elevator would break, like every other day.”

“This is a badass little area,” Kesington said. “Got mad apartment complexes. Fun as hell being a kid over here.”

“It was just groups and groups of us,” Masvidal said.

The streets were now deserted.

“It’s different,” Masvidal replied. “Twitter and video games took over. When I was young, on a Saturday, everybody would be out, riding bikes. That was the thing to do. If you didn’t have a bike, you better get one. Now they’re inside, Facebooking it up, man.”

“Yeah, that is true,” Kesington said. “Guys didn’t have Internet and shit back when we were kids.”

He grabbed his phone and re-started Pandora. A dancehall rhythm erupted. He drove on.

Several miles to the south, he pulled up next to a car parked on a back street. It was crammed with Masvidal's teammates from American Top Team, who had just driven an hour down the turnpike from Coconut Creek. They included Robbie Lawler, the UFC veteran; Mirsad Bektic, a top featherweight prospect; Fatih Cam, a kickboxer from Holland transitioning to MMA; and Jake Heun, a former linebacker for the University of Hawaii.

“Damn! Packed house!” Masvidal exclaimed. He rolled down the window. “You guys got drinks?” he shouted. Someone yelled they had water. “Ok, let’s go then,” Masvidal responded.

He led them to a parking garage attached to a complex containing a Best Buy, a Target, and a Sports Authority. They parked, gathered their gear, walked to the elevator, and rode down with a group of weekend shoppers. The fighters followed Masvidal to an adjacent, 11-story parking garage built over a transit center.

They rode to the top and emerged into a deserted parking lot, about as long as a football field, and proceeded to a stairwell at one end. Nearby, three security cameras, mounted on the top of a pole, stood sentry. The heat, omnipresent, reflected up off the asphalt. “I’m regretting this already,” Heun said.

Masvidal had been coming here once or twice a week for years. From the roof, the view extended out beyond the train tracks running into the transit center, over a canal filled with brackish water, an eight-lane road, a slew of car dealerships, above the green jungle canopy of trees blanketing South Miami. Ten miles to the northeast, past Coconut Grove and Little Havana, the office buildings of downtown Miami rose in the haze, and beyond them, the temptations of South Beach. Ten miles to the west, Miami thinned and spilled into the sawgrass swamp of the Everglades.

Kesington, who produced a series of web videos on Masvidal called Miami Hustle, shot footage as Masvidal explained the task ahead: First, there were the stairs to run. Then, a series of jumps across the parking lot—the breadth of parking spaces 1879, 1880, 1881, and 1882, to be exact. Those were followed by one guy wheel-barrowing another. The jumps could be switched up with carrying another fighter on your back. After that, hit pads, then repeat the process.

Bektic, Cam, and Heun started on the stairs. Masvidal warmed up, shadowboxing on the roof. A sprinkle of rain fell from the clouds, evaporating on the pavement like drops of water on a burner.

As his teammates surfaced back onto the roof, Masvidal disappeared down the stairwell. With every floor, it became harder to breathe, the air more stagnant, hotter and hotter, until he reached the bottom, turned, and began his climb.

As a kid, Masvidal had wanted to be a boxer. He discovered wrestling in high school. His biggest regret was failing to get the grades to stay eligible for the team—he dreamed of competing for a D1 school. Instead, he found MMA, which incorporated his two passions, and decided he was going to be a professional fighter.

He started training and let it be known he’d do anything for exposure, including jumping into the growing South Miami street fighting scene. That’s how he got called one afternoon in 2004, when he was 19, and told to get himself over to a laundromat parking lot. He was at McDonald’s at the time. He finished lunch, drove over, took off his shirt, and got into a fierce scrap with a Kimbo Slice protégé named Ray.

For Masvidal, it was just another fight. He didn’t think anything about it until more than a year later, when a friend called and asked if that was him on YouTube. His two fights with Ray were on their way to racking up hundreds of thousands of views, Masvidal’s first notoriety.

Masvidal considered street fighting a joke; it was certainly not what he wanted to be known for. He kept working, coming up on the South Florida MMA scene before making a tour of the MMA business that left him joking that he should be the “poster boy for bankrupt promotions,” with stints in Bodog, Sengoku, Bellator in its infancy, and finally Strikeforce.

The shaky business side meant he went seven, eight, nine months without a fight, and then would have to take one on a couple weeks’ notice because he was desperate for money. That resulted in brutal weight cuts and the feeling of never really being mentally prepared. When Strikeforce finally went under in January, Masvidal was ushered into the UFC. He won his first UFC fight in April, against Tim Means.

His friends and coaches saw a new focus in Masvidal—he was sleeping more, eating better, training smarter. For Masvidal, it was simple: At 28, he finally knew he was going to get four fights a year. He could maintain his weight, his training, not have to worry about where his rent was coming from. It was all laid out for him; all he had to do was win and the path headed straight to a lightweight title shot.

Masvidal reached the top of the stairs, bent over to catch his breath, and then walked out onto the roof and started to frog hop across empty parking spaces.

More than an hour passed as the fighters went round after round. The jokes and bantering had ended, the only noise the sound of gloves hitting pads and distorted hip-hop blaring from Bektic’s phone. They had stopped wheel-barrowing after the asphalt had scorched a blister onto Heun’s hand.

Masvidal went back into the stairwell for his tenth and final trip. He reached the bottom and turned up, legs wobbly, body screaming. As he always did on the last few trips of a session, he envisioned his two daughters waiting for him at the top. The more he suffered this, he believed, the more likely their lives were to be comfortable down the line.

He continued up the last flight of concrete steps and emerged into the sun. He hopped on the back of Lawler, who carried him across the parking lot. Then they switched, and Masvidal hauled Lawler.

They were almost done. The security cameras loomed above. Below, trains pulled in and out of the transit center, disgorged their passengers, took on new ones, and continued on.

The Anxiety of the Fighter in Limbo