Joseph Duffy Is Forging His Own Path With UFC 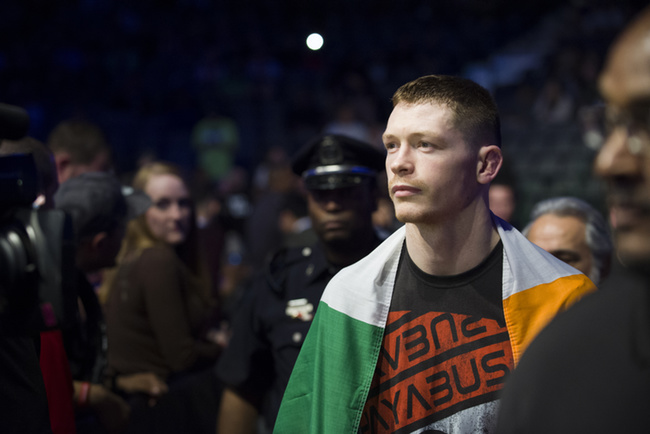 On the announcement of his signing with UFC, some international fans were skeptical about the arrival of Joseph Duffy on the promotion’s roster. Having taken a break to pursue professional boxing in 2011, on his return to MMA three years later ‘Irish Joe’ banked two wins under the Cage Warriors banner before Dana White and Co snapped him up. He boasted a respectable record of 12-1, but many felt it was his 2010 win over Conor McGregor that really had UFC vying for his signature.

White admitted that a rematch between the two would be big business after Duffy’s debut at UFC 185. The Irishman scored a sensational first round stoppage over Jake Lindsey at the March 15 event in Dallas, showcasing his boxing prowess to his new UFC audience. However, with talk of a potential move to 145 lbs leaking out before his debut, the conversation stayed transfixed on the McGregor rematch, with the debut win nearly becoming an after thought in the Duffy story.

On the back of his devastating body assault of Lindsey at UFC 185, people were eager to see more of Duffy. It was no surprise when the Donegal man was given main card billing for UFC’s first trip to Glasgow and once again the Tristar fighter showcased why it was no accident that he has ended up with the world’s flagship MMA promotion last Saturday. Having been brought into the Montreal fold just weeks out from his UFC debut, Glasgow would be his first full camp with the world-renowned gym.

Even without throwing a single shot, Duffy’s stance stands out from the opposition. A rarity for MMA, the head movement of the Irishman is a sight to behold and compared to his opponents he looks like he is nearly competing in a different sport as they prepare to exchange. The same punching skills were on display against Ivan Jorge early on in Glasgow, but the fact that Duffy’s victory showcased a completely new dimension to his game is the most impressive thing about his performance. 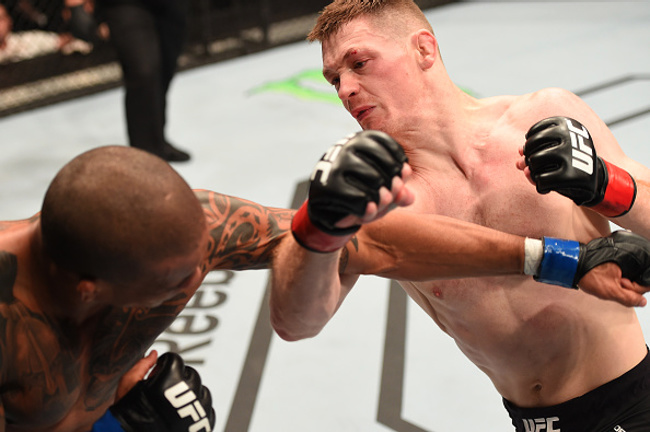 What people don’t know about Duffy is that he has studied Japanese jiu jitsu throughout his life, a martial art in which he acquired a black belt. Before he pursued boxing, he was primarily known as a submission fighter—hence his most famous pre-UFC victories coming by submission over Conor McGregor and Norman Parke.

Jiu jitsu black belt Jorge has shown a propensity to establish a body lock on his opponents before taking them to the ground, and against Duffy he managed to do exactly that. As the two careered towards the canvas in Glasgow, ‘Irish Joe’ immediately found an angle and locked up a triangle choke, which forced a tap from the Brazilian black belt. The submission victory saw Duffy take home a ‘Performance of the Night’ bonus, and rightly so. In just two UFC performances he has showcased diverse striking ability and a dangerous guard—a dynamic skillset that will definitely cause his next opponent trouble.

The Irish fans were singing Duffy’s praises after his main card debut win in Scotland. Having rose to the occasion with his main card birth in Glasgow, there is a great chance that Duffy will now receive similar billing when the UFC roll into Dublin in October. His countrymen are calling for ranked opponents now, Dustin Poirier or Nate Diaz seem to the preferred choices. They believe in the lightweight, and he seems to be enjoying proving his stock to them.

He is far from cocky though. In fact, you might consider Duffy one of the most humble fighters on the UFC’s books. While McGregor seems to thrive on the spectacular, Duffy downplays the marketing side of the game and lets his performances do all the talking. The only time we ever see a little bit of swagger from him is straight after he finishes a bout. It’s nothing too obvious, but there is a different pep in his step, a look that says he never doubted that this would be the outcome and a determination that makes you think he’s only getting started. The whole series of swagger last no more than 30 seconds and as soon as he’s got the microphone back in his hand he’s back to being a grateful and humble competitor.

It’s not all been one-way traffic with the media when it comes to the McGregor rematch, but they have certainly done the majority of pushing. Duffy is not afraid of a second meeting with ‘The Notorious’ and after putting his name in the hat when Jose Aldo first pulled out of the bout, everybody is now aware of that. McGregor is the biggest payday in the sport at the moment and you can’t blame anyone for pursuing that fight. The reality of the situation is if McGregor continues to win, Duffy will always be thrown in the conversation as a potential opponent as he remains the last man to put a blemish on his record.

However, ‘Irish Joe’ is very much on his own course now. Two first round stoppages into his UFC career, he now has the perfect opportunity to win even more Irish fans over with a big performance in Dublin on October 24. He eliminated any plans of dropping down to featherweight after the win in Scotland and should ‘Irish Joe’ manage emerge in the rankings following the Irish date, UFC could have another big Irish draw on their hands going into 2016.