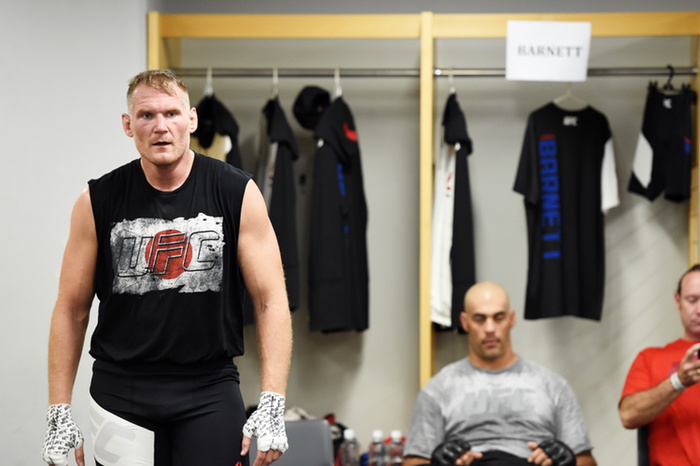 If you told me that two heavyweights were going to clinch for twenty-five minutes, I would say that's what you get for booking heavyweights in five round fights. Roy Nelson and Josh Barnett did just that, and yet it was brilliant to behold. I have noted before that I think Barnett's performance against Frank Mir was some of the finest dirty boxing I have ever seen, but Barnett's showing against Roy Nelson might have just bested that.

And to Nelson's credit, he made it through a five round fight, and he didn't look absolutely useless from the opening of the second round as he so often does. While Barnett pulled ahead quite clearly as the rounds progressed, the fight would not have been nearly as fun if it were just Nelson doing his usual glutton for punishment routine. Nelson brought a new, thoughtful, measured approach to the bout and gave a very good account of himself.

There was even a little of Nelson's old foe, Daniel Cormier in Nelson's performance as he hit his own (much less beautiful) interpretation on Cormier's classic high crotch. Cormier will run the pipe and then effortlessly change direction, raise the leg, and run through his man to the other side.

But the star of the fight was unarguably Barnett. The Metamoris heavyweight champion eschewed grappling altogether and instead struck into clinches and roughed up the durable Nelson with classical infighting and dirty boxing. Before we discuss the specifics of this infighting, it's interesting to note that Barnett fought the majority of this bout as a southpaw, something he's not done previously. This served to lengthen Nelson's right hand and where against an orthodox fighter, Nelson's right hand can sneak up and over the shoulder, blind siding his man, it swings wide through open space against a southpaw fighter.  Switching back to orthodox midway through the fight often had the bonus of Nelson being unready for it. If you can strike fairly competently from both stances, the angles and distances of the limbs from their targets change so significantly between stances that you might be said to have sixteen weapons in your arsenal rather than the traditional eight of Muay Thai.

A quiet change of stance and suddenly Barnett's right is his power hand.

Barnett made excellent use of kicks and knees to the body to initiate his clinches along the fence—an excellent means of attacking Nelson's much-maligned cardio.

But it was when he got to the clinch that Barnett looked marvellous. If you have followed Barnett's grappling career you might have seen the videos he did with a jiu jitsu magazine about hand control and its importance in passing the guard. In the clinch, Barnett's hand control and its role in frustrating Nelson was clear. Where so often men are absolutely hopeless at delivering damage along the fence because they fall into the tight clinches of underhooks and overhooks, Barnett stayed out in collar ties and wrist grips, pinning Nelson in place with his head. It gave him space to work, and the reactions he needed to open up targets for elbows and knees.

Barnett even used grips from which he was unlikely to land anything meaningful, just to panic Nelson. Barnett held the Russian 2-on-1 numerous times throughout the bout to make Nelson panic, but didn't do much with it. Interestingly enough a variation of this grip was applied numerous times by the boxer, Joe Calzaghe, in his battering of Jeff Lacey.

The important point, and what is missing from almost all attempted dirty boxing performances which turn into fumbling cuddling matches along the cage was head control. You'll note that I said 'classical infighting' as well as 'dirty boxing' earlier. Dirty boxing is a blanket term, but it is so named because the act of holding and hitting is illegal in boxing. What used to be legal in boxing, before referees became terrified of two men touching in any way except for with their gloves, was the use of the head to push the opponent while in the infight.

Driving the head underneath of the opponent's while he is backed against the ropes or cage straightens him up, extending his abdomen and weakening it to strikes. This also removes him from his stance and flattens him along whichever of those surfaces is acting as the boundary for the arena. To see the difference between being along the fence and against the fence, I suggest you watch Jon Jones flatten Glover Teixeira out and batter him with unanswered elbows, while Ryan Bader gets knocked out while Teixeira is able to move his feet and transfer weight. All stuff we examined in the first episode of Jack Slack's Ringcraft.

Head placement kills stance, opens defences, and is just generally a game changer. You can't cuddle in close to stop the punishment if there is a soccer ball of bone in between you and the body of the opponent. And it doesn't matter who you are or who you are against, it is a structurally superior position—Antonio Rodrigo Nogueira, who has been a shell of himself for years, held current heavyweight champion Fabricio Werdum along the fence and whacked away at him for some time with the basic underhook and head pin before Werdum was able to duck a wide punch to escape the fence.

I'm sure you can see how much this sucks for Nelson.

And to see it on the defensive end, just watch Josh Barnett (or Jon Jones, for that matter) immediately get both hands under the chin whenever an opponent body locks them.

Karate for the Win! And for the Loss...

The rest of the card was surprisingly solid. Uriah Hall picked up easily the biggest win of his career in stopping Gegard Mousasi. Hall spent the first round underneath Mousasi, with a moment of surprisingly slick grappling as he used the double wrist lock / kimura to turn Mousasi from the bottom of side control and threaten an armbar. Liam McGeary and Kazushi Sakuraba have done their bit to hammer the point home: the kimura as a position is a hassle from almost everywhere.

While Hall survived, he was far from thriving. As the second round opened, Hall popped out a jab that caught Mousasi. Hall retreated a little further, then leapt with a jumping back kick—a terrific intercepting counter if a little high energy—which caught Mousasi in the head as he performed and inside slip. Now if you throw a jab at a good boxer, he's probably going to slip to that side the majority of the time, but equally there was no feint before this jump it seemed like Hall wanted to catch Mousasi in the body as he came in. We'll never know whether Hall was aiming to catch Mousasi slipping or if it was a happy coincidence that amplified the effects of his technique enormously (like Eddie Wineland ducking straight onto Renan Barao's usual back kick to the body). Whatever the case, the moment of weakness was immediately leapt upon by a man who is often accused of having little finishing instinct.

Kyoji Horiguchi put on a beautiful display of karate-boxing in his flyweight bout against Chico Camus. Plenty of high level MMA striking strategy on display. Firstly, Horiguchi's usual spring in with a 1-2, only to immediately weave into a chest-to-chest position. Horiguchi will often push his opponents away after his attacks, an exploit of the rules that Giorgio Petrosyan has made a stellar kickboxing career of. Nobody can hit hard while they're stumbling backwards.

Always moving the head or pushing away after the right hand, excellently adhering to the pattern of offence.

Horiguchi's weaving left hook is the one that usually stumbles opponents simply because it is the hardest to see coming.

There was the WKF point fighting strategy / Peter Aerts favorite of pushing out into a high kick.

There was the old 'switch forty five' which consists of performing a side step to the side, then bringing the back foot in forty five degrees in the other direction—as stance shift as one darts out and back in on a new angle.

You will recall that T.J. Dillashaw used this to land a slick southpaw 1-2 from a forty five degree angle against Renan Barao. It's value is mainly in it taking the fighter off line as he changes stances, so that he is not a target when he wants to switch.

There was a beautiful skip up lead knee which heralded whoops and cheers from the crowd—somewhere between Lyoto Machida and Paul Felder's favourite knee strikes.

And there was even a missed jab into lead elbow attempt or two. A fun technique which can sometimes bring on a surprise cut. In fact, for years Fedor Emelianenko's only loss was due to a cut as an elbow glanced his delicate, snowflake-white skin.

Spare a final thought for Katsunori Kikuno who might well be the dumbest man competing in mixed martial arts currently. It pains me to call a fighter stupid, but it also pains me to watch Kikuno move past throwing away his tremendous potential and into accumulating brain damage for no reason.

I rant about this every time he fights but if you haven't seen his fights in DREAM and DEEP fights, he was a terrifying striker. He fought with his palms out, George Foreman style, to parry punches, and he led with dozens of hard front kicks to the body. That front snap kick that Conor McGregor used to take the interim featherweight belt? Kikuno was doing that with ridiculous effect five years ago.

Kikuno, through his kicks alone, gave Eddie Alvarez hell on the feet and Alvarez was forced to take down and submit the still incomplete product. Kikuno seemed to have all the potential in the world if he just tightened up some holes in his grappling. One day, Kikuno met Daisuke Nakamura in the ring and suddenly his hands were down by his thighs and he was eating punches to give punches. It was the most bizarre spectacle I've ever seen. He somehow got through a few Japanese fighters while fighting in the stupidest way imaginable and ended up in the UFC, where he has continued to use this hands down style and get knocked out most of the time.

The overhand was not a secret to Eddie Alvarez, you just can't do anything about it with your hands on your thighs and your chin in the air.

I don't know whether he is a masochist, or it's an attempt to prove his bushido spirit or some other nonsense, but I do blame Tsuyoshi Kohsaka. The long-time coach of Kikuno (and coincidently the man who cut Fedor Emelinaneko all those years ago) has done nothing to route his fighter's idiotic behavior and has simply watched him stumble around the ring, getting lit up in almost all of his recent bouts. Shame on you, TK.

The UFC's return to Japan was an excellent card and it is always pleasing to hear that the Japanese audience—though much smaller than in PRIDE's glory days—still appreciates the sport so much. The eerie quiet of the stadium, the lack of USA or 'you're going to die' chants, the stadium losing its mind when Josh Barnett reaped the knee in just the preliminary motion of looking for a heel hook. I truly hope that the UFC and Sakikabara's unnamed promotion can breathe life back into the country's MMA scene and develop that passionate fan base.

Josh Barnett: Return of The Warmaster